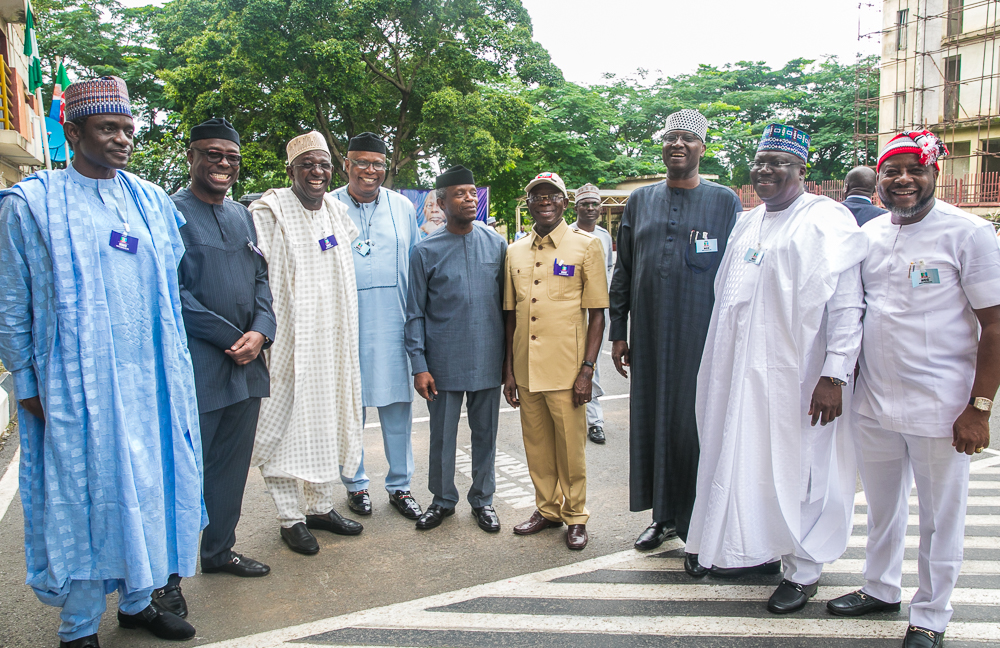 President Muhammadu Buhari has called on members of the All Progressives Congress (APC) to be shining examples in the forthcoming party primaries for the 2019 general election.

The president made this known in his speech at the National Executive Committee (NEC) meeting of the APC.

A party leader, Bola Tinubu, who is not a NEC member, was also sighted at the secretariat of the party. He was, however, not part of the meeting and was not in the NEC hall where the meeting was held.

Apologies were read on behalf of the Speaker of the House of Representatives, Yakubu Dorara, and Deputy Speaker, Yusuf Lasun, who were absent at the meeting.

According to the apologies, they were both absent due to other engagement and medical appointment outside the country respectively.

Mr Buhari urged that the primaries follow electoral guidelines as contained in the Nigerian constitution, electoral act and APC constitution to ensure fairness and justice to all.

“Today, we are meeting to look at some major decisions that will lead to excellent performance at the polls next year starting with party primaries at various levels.

“I urge you all to ensure that the decision taken here today are those that will be for the good of the party and that will meet the yearnings and aspirations of our teaming members and supporters nationwide. They look up to us for guidance and we must not disappoint or fail them.

“The times in which we call for unity, harmony and togetherness, let us all join hands to move our party forward, we must take our party to the next level and I urged all and sundry to give support to our national working committee.”

In his speech, Mr Buhari congratulated the new leadership of the party, led by ex-governor Adams Oshiomhole of Edo, which he said emerged at a critical time.

“Let me congratulate the current leadership of our party led by Comrade Adams Oshiomhole. The team emerged at a most turbulent time when there were rumours and speculations of massive defections in a way that will possible rock the very foundation of the party.

“Despite reconciliatory attempts to keep the house together some members were held bent on pulling down the roofs. They left plotting to go along with scores of people; thus upsetting the party. But due to yeoman’s work by the able party leadership, the exit barely made attempt in our super structure as they could not muster the figures they had envisaged to cause an upset, particularly in the two chambers of the National Assembly.

“APC remains in control and increases by the day with quality people joining our fold. I say congratulations to the new members.

“Hope is rekindled in our hearts but we will give our country purposeful leadership that will improve the quality of life of the people.”

The National Chairman, Adams Oshiomhole, in his opening remark, gave the scorecard of the party’s achievement since his leadership came about two months ago.

He boasted that the party has won most of the elections held under his leadership including governorship (in Ekiti), and senatorial (in Bauchi and Katsina states).

He said the victory in Bauchi, Katsina and Kogi was an affirmation that the people had confidence in the leadership of the party while the loss in the House of Representatives elections held in Cross Rivers, Yobe and Taraba, confirms democracy was working.

Speaking on the defectors, he said their exit was for the good of the party. He described them as conservatives that needed to move away for the party to move forward.

“The decampees felt it will be a huge blow to our party. But I repeat, those that left for personal ambition, those with no political address, migrant politicians and rolling stones politicians, I won’t loss my sleep. Many felt my comments were arrogant but we needed to be blunt.

“We have purged ourselves of excess fat that will clog our veins and we are much more certain of our future.

“Those who have grievances arising from genuine misunderstanding, our responsibilities is to help our party to have common ground and genuinely resolve those issues and we have been trying our best to do so as can be attested to by those that have remained.”

He commended President Buhari for demanding that looted funds stashed in foreign countries be returned.

“If you had money in foreign countries you won’t have the courage to tell the leaders to return stolen money,” the party chairman said.

At the end of the meeting, the APC NEC adopted direct primary to select its presidential candidate.

The party, however, declined to adopt direct primaries for other positions.