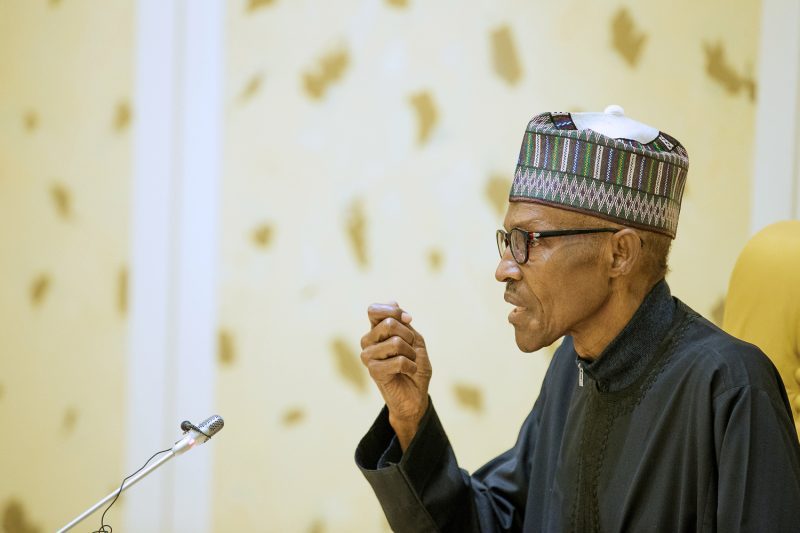 Buhari under fire for comment on rule of law, national security

Lawyers on Monday condemned in strong terms the comments made by President Muhammadu Buhari that the rule of law will take second stage on issues involving alleged threat to national security.

In various interviews with PREMIUM TIMES, the lawyers described Mr Buhari’s August 26 address to members of the Nigeria Bar Association as a descent to dictatorship and a sad development.

In a keynote address delivered at the beginning of the 58th annual conference of the Nigerian Bar Association on Sunday, Mr Buhari spoke on various issues, most prominent of which was his view about the rule of law on issues of national interest.

“Rule of Law must be subject to the supremacy of the nation’s security and national interest.

“Our apex court has had cause to adopt a position on this issue in this regard and it is now a matter of judicial recognition that; where national security and public interest are threatened or there is a likelihood of their being threatened, the individual rights of those allegedly responsible must take second place, in favour of the greater good of society,” Mr Buhari said.

Although the president did not specify current cases in court for which his administration views the need to uphold “national interest” above the rule of law, his attorney general, Abubakar Malami, has given that as a reason for the government’s refusal to comply with repeated court orders for the release of former National Security Adviser (NSA), Sambo Dasuki.

Mr Dasuki was arrested in 2015 for alleged possession of firearms and diverting $2.1 billion while he was NSA.

Speaking during a July 13 interview on the continued detention of Mr Dasuki, Mr Malami said the former NSA could not be released because the allegations against him were related to “issues of public interest.”

“What I want you to know is that issues concerning law and order under Muhammadu Buhari are sacrosanct and obeying court order is compulsory,” he said.

“However you should also know that there is a general consensus world over that where the dispute is only between individuals, then you can consider the issue based on the instant situation. But if the dispute is about an issue that affects an entire nation, then you have to remember that government is about the people not for only an individual.

“So you have to look at it from this perspective. If the issue about an individual coincides with that which affects the people of a nation and you are now saying the government did not obey a court order that infringes on a single person’s rights. Remember we are talking about a person who was instrumental to the deaths of over 100,000 people. Are you saying that the rights of one person is more important than that of 100,000 who lost their lives?

Mr Malami was largely condemned by lawyers and notable Nigerians for his view on Mr Dasuki’s prolong incarceration.

Similarly, various lawyers berated Mr Buhari’s for his views, stressing that nothing justifies the government’s disobedience of court orders.

In his opinion, an Abuja based lawyer, Ejeh Monday, said the president’s allusion to national interest as relatively supreme to the rule of law, is unimaginable

“There is no such thing as the ‘Supremacy of National Security and Public Interest’; regardless of whatever this may mean to the proponent of same: not to talk of saying that there is such thing as the Rule of Law being made subject to the said coinage.

“Human, states, communal, societal and international relations are hinged on the hallowed principle of the rule of law. If you take it out, humanity is done for and man will return to the Thomas Hobbes state of lawlessness wherein the life of man is nasty, brutish and short.

“The rule of law is akin to ensuring that justice is done at all times and under all circumstances. In fact, injustice breeds anarchy which will eventually lead to a breach of national security. In simple terms, rule of law, simply means “that everything must be done according to law,” Mr Monday said.

Mr Monday said while the law allows for a variation of a person’s rights on issues of national interest, “only the courts of law are permitted to determine the terms of the said variation.”

“I agree with Mr President that the rights of individuals must take second place where national security and public peace is threatened.

“However, such suspension or denial of individual rights can only be done in accordance with the rule of law. It is not in the place of the executives to decide whether or not an individual’s rights should be suspended or denied for reasons of breach of national security or on grounds of public interest. These are matters for the courts to decide as the executive cannot be the accuser and at the same time a judge in its own case. The executive cannot resort to self-help or take laws into their hands.

“Consequently, the president and his advisers missed the point absolutely, if what the president had in mind when he talked about supremacy of national interest and security over and above the rule of law, is to put before lawyers a justification for the continued incarceration of Sambo Dasuki, the former National Security Adviser (NSA) and El-Zazaky,” Mr Monday said.

In a similar opinion, a Senior Advocate of Nigeria, Chijioke Okoli, said while the position alluded to by Mr Buhari could be considered in terms of war, nothing justifies this administration’s abuse of court orders.

“There is no doubt at all, that in times of war, individual liberties may be curtailed. But even then, only to the extent of requirements of the exigencies of that period. In all these, it must always be borne in mind that it is the court of law that has the final say.

“The judges are notionally at least, the wisest among the populace. And the constitution has invested them with the power of the last say on any dispute, including those involving the federal Government of Nigeria.

“If President Buhari is alluding to the Sambo Dasuki case, as I suspect he was, then he is completely wrong. I believe all the national security considerations must have been brought to the court’s attention in the case, but the court has repeatedly held that granting Colonel Dasuki bail on terms does not compromise national security.

“The federal government’s position is quite sad. A very dangerous precedent is being set for a supposedly democratic dispensation,” Mr Okoli said.

In another opinion, Simon Ameh, also a Senior Advocate, said although President Buhari is right in his submission that the right of an accused cannot outweigh the need to ensure national security, the rule of law must always be the determining factor of such conclusions.

“Yes, the president is right. There must be a nation before you think of individual rights. But national security must be pursued in accordance with the rule of law. Our democracy is built on the rule of law,” Mr Ameh said.

In a similar view, a human rights lawyer described the submissions of Mr Buhari as a descent to dictatorship.

“Democracy is rooted in respect for human rights and rule of law. Otherwise, we descend into dictatorship or arbitrary rule. National security is subjective and cannot be used to subvert human liberty and consequently national stability,” Mr Nwankwo said on his twitter handle.

In a different opinion however, Rotimi Oguneso, a Senior Advocate, says people have decided to politicise a “Known” stance, because it is being repeated by the president.

“I think basically people are taking the president’s comments out of context-perhaps for politics. What the president said should be viewed from the background of his reference to the decision of the judiciary.

“For me, the president has not said anything new. He has merely restated the principle of majority in the old English case Liversidge Vs Anderson. Where the issue in question in a case involves national security, the fundamental rights of an individual must take the back seat,” Mr Oguneso said.