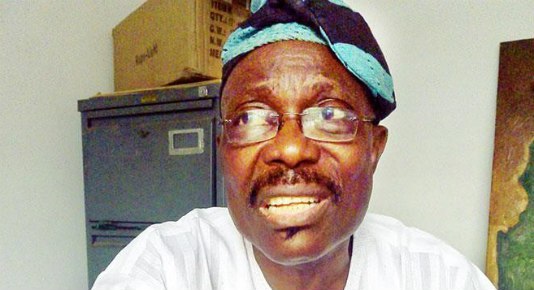 The Lagos State Chairman of the People’s Democratic Party (PDP), Moshood Salvador, has dumped the party for the All Progressives Congress (APC).

He said his exit marks the end of PDP in the state.

Mr Salvador announced his defection on Monday while addressing his supporters in Lagos.

He said he took the decision because all his efforts to move the PDP in the state forward had been frustrated by some elements in the party.

Mr Salvador alleged that a former deputy national of the party, Olabode George, had done everything possible to undermine the progress of the party in the state.

He said he could no longer labour in vain, adding that the national leadership of the party had done nothing to support or appreciate his efforts as PDP Chairman.

“When you have people or leadership that cannot give you encouragement to carry out your vision, you take it to another place where it will be appreciated.

“I am not happy that I am abandoning what I laboured for, but I have to move on with my supporters because I cannot continue to labour in vain.

“Today, the chairman of PDP Board of Trustees called me on the defection and I told him to allow me consult with my people before feedback.

“The PDP National Chairman, Prince Uche Secondus also called me for the first time since my travails.

“He never called since I was put in jail on a cooked up murder charge; he called me today to ask why I want to defect.

“And I told him it is not possible for me to be in the same party with Bode George because he undermined all my efforts to reposition the party.

“He was doing all these things and the national leadership was allowing him, saying he is an elder.

“Bode George also cooked up things to put me in jail in the murder case of late Aborishade.

“Enough is enough. I am leaving the party with my supporters and I am taking them to APC where they would be recognised and appreciated,” he said.

Salvador said he had since handed over the PDP structure to his deputy who would continue the affairs of the party.

He said his exit meant that the PDP was dead in Lagos as he was moving with about 15,000 supporters, including party executive members at council and ward levels.

Mr Salvador insisted that he was innocent in the murder case of Aborishade, saying all the things said about his involvement were all lies.

He said he would stage a “show of strength” rally on Monday to show his former party that he was going to the APC with thousands of his followers.

Hours before Salvador announced his defection, Mr George said Mr Salvador has the right to leave the party if he wished to do so.

Mr George made the statement in Lagos while launching a trust fund for the family of the late Adeniyi Aborishade, a chieftain killed at a meeting of the party in Eti-Osa on July 21.

He was reacting to media reports that Salvador and some others had concluded plans to defect to the APC.

Mr George said Mr Salvador could not be stopped from leaving as he is an adult, competent enough to make decisions for himself.

He, however, questioned why the PDP chairman would want to leave the party now, especially as Aborishade’s murder case, to which he was earlier linked, had not been resolved.

“You see, whether he is going to APC or wherever, we cannot stop him; he is an adult, not a young man.

“So, he can decide for himself. But we have a question to ask: Why now?

“I am a deep-rooted politician and as a master mariner, I know you do not jump ship when you are in a stormy weather.

“Or do you swim against the tide? No, you will drown. Now, who is drawing Salvador to come to APC?

“To get cover or what? No, that will not stop justice for Aborishade,” he said.

On allegations that he was responsible for the friction in the party, Mr George said it was wrong for Mr Salvador to have made the allegations.

He said the PDP Chairman was actually the one running the party like his private estate, causing rancour and unnecessary wrangling in the party.

He said then that the party had agreed that 65 per cent of the offices should go to Makarfi’s followers in the state while 35 per cent should be given to followers of ousted Senator Ali Modu-Sheriff.

“Rather than following the agreement, he was imposing people as party executives, taking decisions that did not go down with members.

“He was running the party as if it was his personal estate,” he said.

Mr George said PDP was based on strong democratic foundations and so impunity and indiscipline could not be allowed to reign in the party.

He condemned the violence in which Aborishade was killed, saying the party was saddened by the incident.

Mr George said the party was not satisfied with the handling of the case by the police in Lagos and called on the Inspector General of Police to set up a special panel to probe the incident.

Mr George said he was launching the trust fund to raise money for the deceased’s family to support them.

He urged party members to contribute to the fund to identify with the family at this trying period.

Speaking on the issue of vote-buying, Mr George said the practice endangers democracy.

He said the practice was symptomatic of the pervasive corruption in the country, calling on citizens to stand up against the practice.

“We must all stand up against the practice and protect our democracy,” he said.