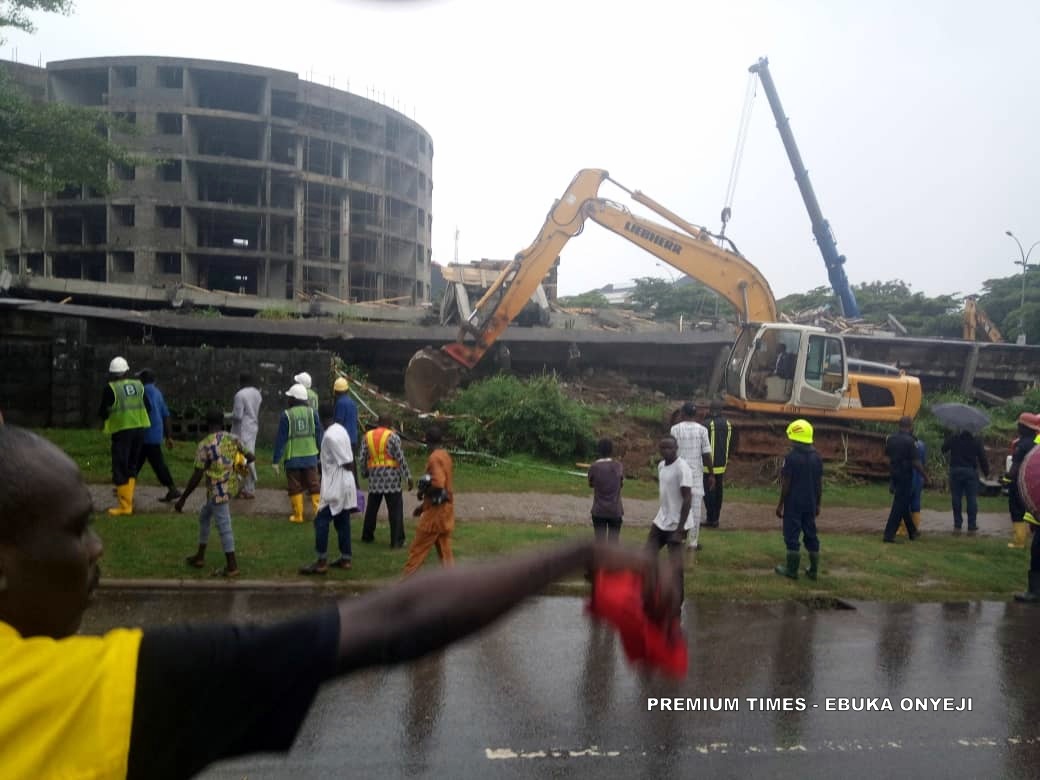 A protest occurred Saturday afternoon at the site of a collapsed building in Abuja as government agencies including the National Emergency Management Agency, NEMA ended its rescue mission.

One person was confirmed dead after the building under construction collapsed on Friday, the NEMA said, but residents said at least 10 persons remained under the rubble.

The already vexed residents described as unsatisfactory the efforts of the agencies on the rescue mission.

“From the beginning, the rescue mission was at zero level because everything has a plan,” said Nonso Amado, a building technologist.

The angry mob were dispersed by the police as their momentum increased.

Several shots of tear gas were released by the police in a bid to restore calm.

Earlier at a press conference Saturday, Mustapha Maihaja, the Director-General of NEMA said besides the single fatality, one other person was critically injured and five others rescued alive at the site in Jabi, Abuja.

But residents rejected the claim, and complained about the rescue effort.

They said two people died and insisted that more than 10 people were trapped in the debris as at Saturday morning when rescue efforts ended.

Meanwhile, Umar Shuaibu, Abuja Metropolitan Management Council Coordinator of the FCT said the police have been instructed to “arrest any scavenger caught prawling on the site”.

“There will be scavengers who will want to prowl on the remnants of the rubble. We have instructed the police to arrest such people.

“It’s unfortunate but we thank all the agencies that swiftly responded in the rescue mission. We worked overnight in record time and combed everywhere and we found out that there is no single person left inside.

“We will now commence investigation on what really happened. The first stage is to comb this place and the next is to evacuate this rubble.”

Many builders, construction and architectural associations also visited the site taking samples in a bid to also determine what caused the collapse.

“There is a lot administrative documention to follow up on. From now till Tuesday we will do that and commence our own investigation into what happened,” Nina Bricks, the Chairman Abuja Union of Architects said.

“Nobody here can give you a categorical answer on what really happened here as at now without conducting the required tests, that’s almost impossible.”

Between 1 and 2 pm on Friday, the building situated within Jabi/Utako park, directly opposite Panda Shopping Mall, collapsed to the consternation of many residents and passersby.