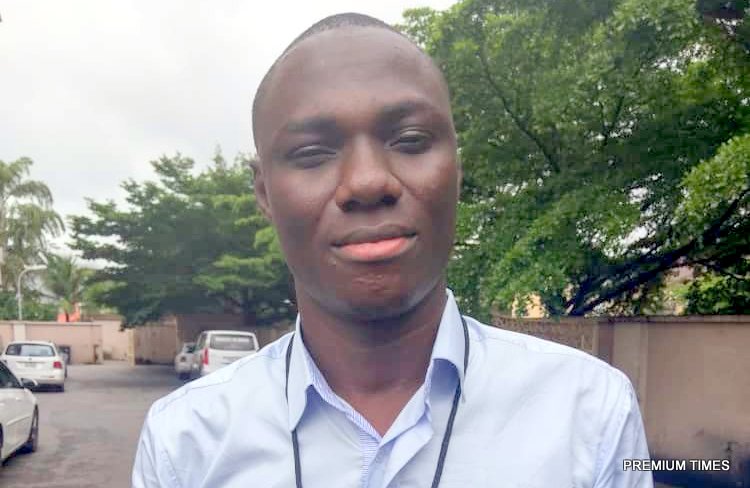 Samuel Ogundipe, a reporter at Premium Times, after his release from the Police Station

A PREMIUM TIMES journalist, Samuel Ogundipe, who has been detained since Tuesday has been released.

Mr Ogundipe was released on Friday morning after he was granted bail by magistrate Abdulwahab Mohammed of the Kubwa Grade 1 Magistrate Court in Kubwa, Abuja.

The judge had first heard the case on Wednesday after Mr Ogundipe was secretly arraigned without being allowed legal representation. On that day, Mr Mohammed granted a request by the police that the journalist be detained for five days until August 20.

However on Friday morning, PREMIUM TIMES learnt Mr Ogundipe was to be taken to the same court. The company’s lawyer was thus present at the court.

At the court, the lawyer argued for the bail of Mr Ogundipe, a request that was not opposed by the police counsel.

Mr Mohammed granted the bail in the sum of N500,000 and a surety who must be resident withing the court’s jurisdiction.

The bail conditions were met and Mr Ogundipe was released.

Earlier on Thursday, PREMIUM TIMES had responded to a statement by police spokesperson, Jimoh Moshood, accusing Mr Ogundipe of being in possession of classified document.

Mr Moshood alleged that Mr Ogundipe’s action was capable of causing a breach of national security and a breakdown of law and order.

In its response, PREMIUM TIMES through its lawyer, Jiti Ogunye, said Mr Moshood’s statement was “misleading and prejudicial.”

Mr Ogundipe had been held since Tuesday for refusing to disclose his source for a story. The story, also published by other news media, revealed a report by the Inspector General of Police, Ibrahim Idris, to Acting President Yemi Osinbajo. The report indicted sacked Director General of the State Security Service (SSS) Lawal Daura for his role in the siege on the National Assembly last week.

Mr Ogundipe’s detention has been condemned by Nigerians, local and international rights groups including Amnesty International and Committee to Protect Journalists.