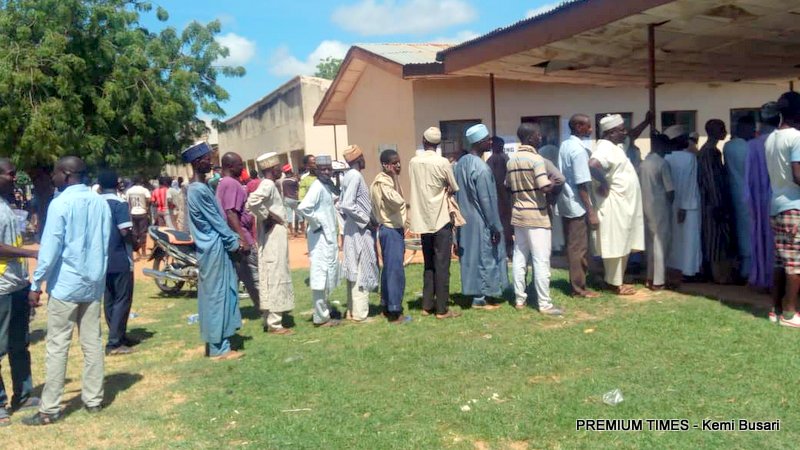 Voters on queue in Kanti B polling unit 4

The battleground is set for two brothers to slug it out for the vacant Katsina North senatorial seat.

The district, where President Muhammadu Buhari hails from, will be keenly contested by Kabir Babba-Kaita, hoisting the flag of the Peoples’ Democratic Party (PDP), and Ahmad Babba-Kaita donning the colours of the All Progressives Congress (APC).

The seat became vacant following the death of Mustapha Bukar, the senator who represented the district until his death in April 4.

The Independent National Electoral Commission (INEC) had fixed Saturday August 11 for the by-election after receiving a notification from the National Assembly indicating that the seat is vacant.

Of the six, the two major contenders are born of the same father but different mothers.

Kabir, a retired customs officer had emerged the sole candidate of the PDP following the withdrawal of his major contender, Mani Nasarawa. He had never contested for nor held any known political office before.

For his brother however, it wasn’t an easy ride, Mr Ahmad, currently a member of the House of Representatives representing Kusada/Ingawa/Kankia Federal Constituency, battled the APC primary with another Rep member and nine others.

He emerged after polling 1,723 votes to beat his closest rival, another Rep member, Nasiru Zangon Daura, who polled 1, 474 votes.

This is President Muhammadu Buhari’s polling unit. But Mr Buhari will not participate in today’s election as he is out of the country on vacation.

Accreditation and voting have commenced simultaneously at Kofar Baru, PU 004.

So far, the voter turnout has been very low in few polling units where the process has commenced.

Contrary to what usually obtains in Nigerian elections, there is no restriction of vehicular movement in Daura.

In Kankia, the hometown of the two major candidates, it’s business as usual for motorists and traders.

Voter accreditation and election are ongoing in most of the polling units visited.

11.15a.m. Massive voter turn out at Galadima A, polling unit 10. This is the polling unit of the two major candidates, Kabir Babba-Kaita of PDP and Ahmad Babba-Kaita, of APC.

While Kabir has voted, Ahmad is still being awaited

12.15 pm: The APC candidate, Ahmad Babba-Kaita, arrived the polling unit to cast his vote. He opted to join the already long queue and wait for his turn.

3.50p.m. Sorting has started at polling units across the constituency.

At Bakin Kasua Primary School, the presiding officer is currently sorting the votes of the six contesting political parties.

1:45AM: The All Progressives Congress has latched on a comfortable early lead in the Katsina North by-election.

After collation of results from three local governments, the party already polled 55, 974 votes more than three quarter 11, 768 of the PDP.

The three local governments whose results have been read are; Daura, Dutsi and Sandamu.

Collation of results has started at the headquarters of INEC in Katsina North senatorial district.

The collation started around 12.35 a.m. at the office located in Daura.

The senatorial district has 12 local government areas where election was held on Saturday, August 11.

Below are the results:

After receiving results from three local governments, the collation has been suspended for an hour.