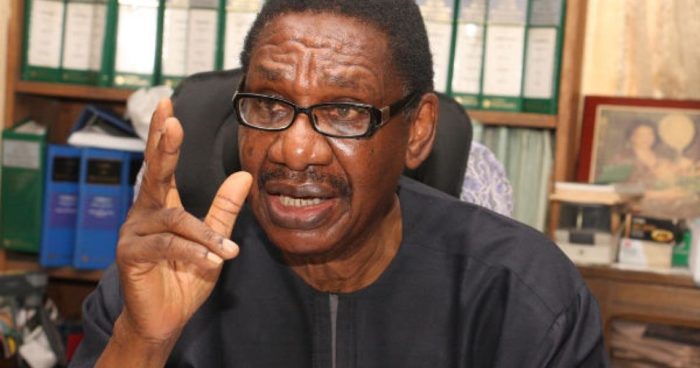 Itse Sagay under fire for backing Adeosun on certificate forgery

Nigerians have criticised Itse Sagay, a constitutional lawyer, professor and senior anti-corruption adviser to President Muhammadu Buhari, for saying finance minister Kemi Adeosun should remain in office even if guilty of forgery, but demanding the immediate resignation of Senate President Bukola Saraki on “moral grounds”.

The Nation newspaper quoted Mr Sagay as insisting on Thursday the Senate President was no longer fit for office after defecting to an opposition party, while dismissing a case of criminal forgery by the finance minister as inconsequential.

“I do not see anything serious about it,” Mr Sagay, head of presidential panel on anti-corruption, said in an interview that critics say has elevated the art of doublespeak to new levels.

Mrs Adeosun has been embroiled in the biggest certificate forgery scandal since former House Speaker Salisu Buhari’s inglorious exit in 1999.

PREMIUM TIMES uncovered Mrs Adeosun’s web of illegalities in an investigation published last month. Our findings revealed that the finance minister, who was born in the United Kingdom where she started and completed her education, failed to return to Nigeria to participate in the mandatory national youth service.

Since she graduated under the age of 30, the law required she must return to Nigeria to participate in the youth service, else she would be ineligible for public office. Mrs Adeosun returned to Nigeria between early and mid-2000s, but rather than enroll to serve her country, she forged documents to claim she had been exempted from doing so.

Based on the provisions of the National Youth Service Corps Act, the finance minister’s action was criminal and she would face long sentences if convicted.

More than a month after the scandal broke, Mrs Adeosun has refused to address it, prompting even those who initially accorded her the benefit of doubt to flip. In this time, drama over her status has continued amongst other government agencies and officials.

Information minister Lai Mohammed is about the only senior official who has commented on the scandal, even though his remarks left the public even more confused.

While Mr Sagay did not ignore the question as his colleagues and other supporters of Mr Buhari have done for so long, his response has shocked many Nigerians considering his status.

“I am absolutely sure that Itse Sagay knows what he is saying is incorrect,” said lawyer Inibehe Effiong. “But he is making the argument to be politically-correct, anyway.”

The Nation quoted him as emphasising the brilliance of Mrs Adeosun, which he credited for the rosy picture of Nigeria’s economic situation he painted and concluded that she is indispensable.

“But, let me tell you my reaction. This woman is a brilliant and extremely valuable member of this government.

“A lot of the good things happening now – the welfare that Nigerians are enjoying and are going to enjoy, because it takes time, and the way our economy is booming, how we got out of recession – are due to her expertise, her commitment, her sacrifice,” Mr Sagay said.

He went on to spin the scandal as though it was coming from the administration’s perceived enemies, especially the opposition Peoples Democratic Party.

“There is nothing in this world that will make me remove such a woman from the government. The PDP can weep from now until there is no tear in their body; she is going to be there,” Mr Sagay said. “We cannot afford to lose that woman.”

Although he clarified that the position was entirely his, he appeared to be laying a groundwork for the administration’s position on the scandal, which Nigerians expected would eventually become public.

“I’m telling you now. If you ask me – If I were President Buhari, I would never, ever touch that woman because she’s damn good,” he said. “The enemies of this government want to reduce his capacity to provide good governance by engaging in social media attacks and trying to get rid of her. It will not work.”

In the same interview, Mr Sagay admonished Mr Saraki to resign from office and protect his honour, even though he admitted there was no constitutional basis to canvas such argument.

“He should relinquish his position as a matter of honour. He’s not compelled by law to do so. He needs to be removed by two-thirds majority.” Mr Sagay said. “He got there because he was in APC, even though he got there by subterfuge, which is typical of him. He got there in a cheeky, fraudulent manner.”

Yet, he argued that Mr Saraki could be removed from office by only 25 out of 109 senators, an argument that seemed to be a manipulation of Section 50 of the Nigerian Constitution which demanded two-thirds of all members to remove the Senate President.

“Nevertheless, for him to be removed, they need two-thirds, not of the Senate, but of those present and voting at a meeting. “It doesn’t have to be everybody,” he said. “It’s those who happen to be there. Once they meet the quorum of one-third, and he is there, he can be removed by two-thirds of that one-third.”

The All Progressives Congress and its supporters have been leading the charge for the removal of Mr Saraki since he decamped to the PDP, despite that the top lawmaker does not appear to have lost the support of two-thirds majority. Also, it remained unclear which party actually has a majority at the Senate, three weeks after a wave of defection by state and federal lawmakers hit the ruling APC hard.

Mr Saraki argued on Wednesday that he had the support of a resounding majority at the Senate, and, as such, found no compelling rationale to step down.

A simple majority, 54 senators, is required to elect Senate President, and going by Mr Sagay’s argument, would require even less than half of that to remove him, an assertion a legal analyst said he found baffling.

Political analyst Sola Olubanjo said Mr Sagay’s comments should elicit concerns and prayers from Nigerians rather than being countered.

“There is really nothing here to argue about, his own comments have shown that prayers and worries from well-meaning citizens should be directed as him,” Mr Olubanjo said. “This is too senseless for anyone to spend their brain and time analysing or contradicting.”

Political analyst Sola Olubanjo said Mr Sagay’s comments should elicit concerns and prayers from Nigerians rather than being countered.

“There is really nothing here to argue about, his own comments have shown that prayers and worries from well-meaning citizens should be directed as him,” Mr Olubanjo said. “This is too senseless for anyone to spend their brain and time analysing or contradicting.”

Kole Omotoso, a professor, and dean, Faculty of Humanities at Elizade University, Ondo state, said “The reason small infractions are important and need to be investigated is because they are usually pointers to more grievous infractions.”

“Sagay will regret this statement one day,” he said.

But Ayo Akanji, a supporter of the APC and social commentator, said Mr Sagay was right to be reluctant in demanding Mrs Adeosun’s resignation, saying her case is different from that of the Senate President.

“The cases are different. Mr Saraki has a moral right to stand down because his action amounts to betrayal,” Mr Akanji said. “It is only normal that you allow the party with the majority to nominate the Senate President.”

Mr Akanji rejected Mr Saraki’s argument that he would remain in office insofar as he has the support of two-thirds majority, saying it might be legal but still devious and unacceptable.

“It behooves her to speak,” Mr Akanji said of Mrs Adeosun’s scandal. “But it still all about allegations only for now, until the NYSC has given a final position on the matter.”

“She has been doing a fantastic job,” Mr Akanji agreed with Mr Sagay. “Our economy was battered and shattered when she came on-board, but now we still how fast and sustainable she had managed to turn things around.”

The Nigerian economy slipped into recession in August 2016, about nine months after Mrs Adeosun settled in office. While the economy has been out of recession more than a year later in September 2017, other core economic challenges remain.

The United States dollar was N198 in May 2015 when Mr Buhari assumed office, but has remained stagnant at roughly N260 against the dollar for more than two years, after initially shooting far beyond that for several months in early 2016.

Similarly, unemployment rates have refused to ease, with the National Bureau of Statistics estimating 7.9 million job losses between January 2016 and September 2017.

Inflation rates have, however, witnessed steady reduction since last year, dropping to 11.2 percent in June.