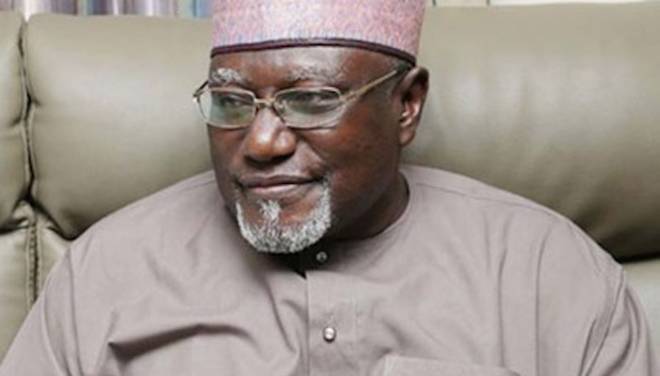 Intelligence authorities have released Lawal Daura and confiscated his international passport, PREMIUM TIMES has been informed.

The top spy chief was disgraced out of office and taken into custody on Tuesday after ordering the deployment of SSS operatives to lay siege to the National Assembly.

Mr Daura was released on Wednesday evening from a guest house run by the State Security Service in Gwarimpa area of Abuja where he had been placed on house arrest since Acting-President Yemi Osinbajo ordered his dismissal on Tuesday. The presidency said the deployment of the SSS officials to the National Assembly was unauthorised.

The presence of masked SSS agents who prevented federal lawmakers and staff members from entering the parliament drew nationwide outrage on Friday morning. By afternoon, Mr Osinbajo, apparently incensed by the images of the ensued fracas being beamed across the world, ordered Mr Daura’s instant dismissal from service.

He was also asked to be remanded in custody, following allegations he might have committed some of the gravest heist and betrayal in Nigeria’s national security history.

He was initially reportedly taken to the Federal Special Anti-Robbery Squard facility in Guzape neighbourhood, Abuja, where he spent time answering questions for his highly controversial tenure at the secret police.

Later on, he was moved to one of the numerous guests houses run by SSS around the Federal Capital Territory. Specifically, he was detained at a building in Gwarinpa, a massive residential community filling the northwestern corridor of the capital, security sources informed of the matter said.

“He was given his phones and released to go,” a source said. “But his international passport was taken from him.”

It was not immediately clear where Mr Daura is currently putting up, but security sources said he would not be able to go under the radar given the intensity of surveillance already placed on him.

His two known telephone lines were still switched as at the moment this story was ready for publication. The SSS has not had a spokesperson since September 2015, shortly after Mr Daura took over, despite demands by media advocates.

The police did not return requests for comments about when Mr Daura was handed over to the SSS and other details surrounding his interrogation.

Although specific allegations against Mr Daura are still being tidied by law enforcement authorities, the major crux of why he might be facing charges weighs heavily on corruption allegations.

Already, one of his closest associates at the SSS has flipped on him, recounting gruesome details of fraudulent activities allegedly executed by Mr Daura to PREMIUM TIMES over the past 24 hours.

It was also learnt that the Economic and Financial Crimes Commission is after Mr Daura, but details of that are still fuzzy as at Thursday morning. A spokesperson for the EFCC did not return requests for comments.

Multiple security sources are, however, not optimistic about the possibility of EFCC taking Mr Daura into custody, much less filing charges against him. This is not necessarily because they feared Mr Magu might be trying to avenge Mr Daura’s thwarting of his confirmation by the Senate, but because it would be a major flight from a longstanding culture in the security circles.

“No serious service will release its men to other services for investigations and prosecution,” a security source said. “Except there is an executive order from above.”

The EFCC has moved against security chiefs in the past, including former Inspector-General Tafa Balogun and service chief under President Goodluck Jonathan, but the presidents reportedly signed off on these.

Whether Mr Osinbajo has asked the EFCC to probe Mr Daura was unclear. The presidency did not immediately return requests for comments Thursday morning.