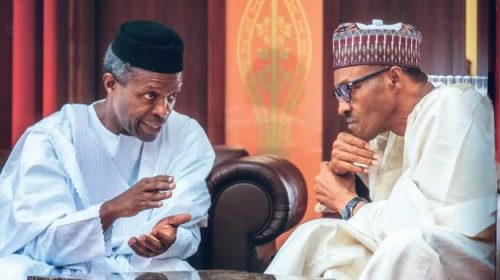 The Presidency on Wednesday dismissed reports that the Acting President, Yemi Osinbajo’s decision to sack the Director General, State Security Service (SSS), Lawal Daura, had anything to do with power struggle between him and President Muhammadu Buhari.

Femi Adesina, the Special Adviser to the President on Media and Publicity, refuted the reports when he fielded questions from State House correspondents at the end of the meeting of the Federal Executive Council which was presided by Mr Osinbajo at Presidential Villa, Abuja.

Mr Adesina said that President Buhari was fully aware of the events that led to the sacking of the former SSS chief.

“The presidency is one. Whenever the President is proceeding on vacation he transmits power to the Vice-President who then becomes acting President.

“On this occasion he also did that. So the acting president has all the powers of a president.

“Now, it is then a matter of decency and we know that the acting president is a decent man. There is no tussle for power, there is no tough battle between him and the president.

“When something like what happened yesterday (Tuesday) would happen then there will be unanimity, there is no way there won’t be unanimity on that kind of decision.

“It is not something that will be discussed with the press but know that there was unanimity in that decision.’’

Mr Osinbajo had on August 7 directed the termination of the appointment of the Mr Daura and directed him to handover to the most senior person in the organisation.

The dismissal follows the siege on the National Assembly on Tuesday by SSS officials. The presidency said the siege, which has been condemned by most Nigerians, was not authorised.

PREMIUM TIMES reported how Mr Daura was subsequently arrested after his dismissal.

Matthew Seiyefa has since assumed duty as the acting Director-General of the SSS.

Mr Daura was appointed by President Buhari on July 2, 2015, following the dismissal of his predecessor, Ita Ekpeyong.

He is from the same Daura part of Katsina State as Mr Buhari.

Yemi Alade out with another single ‘Oh My Gosh’