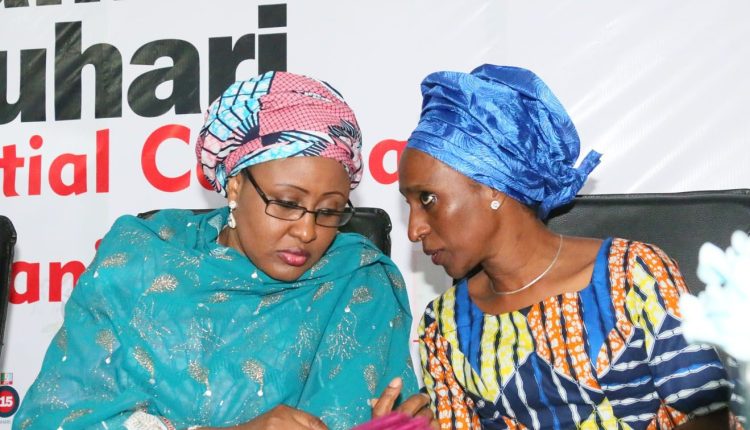 Buhari ignores own promise, appoints 10 aides for office of wife of president, VP

The Muhammadu Buhari-led federal government has appointed several aides for the “Offices of the Wife of the President” and that of the Vice President’s wife, despite his promise to scrap the offices.

Buhari, in an interview he granted to Weekly Trust in December 2014, had said he would not have an office of the first lady should he emerge as president. He gave as his reason the fact that such office is not provided for in the constitution, and suggested that the Ministry for Women Affairs should be allowed to play its role unhindered.

Aisha Buhari, following this statement, also gave her word that she would abide by whatever the constitution stipulates, and said she would perform her traditional duties only as the wife of the president.

It’s arguable these assurances contributed in no small measure to the All Progressives Congress’s victory at the polls in the year that followed — especially given the unpopular record of Patience Jonathan, the erstwhile first lady.

However, more than three years into the administration, The ICIR can confirm that, though linguistically the office of the first lady has been abolished, the federal government has spent taxpayers’ money to sustain, as called, offices of the wives of the president and vice president.

Out of these 118 advisers and assistants, ten have been in the exclusive service of the wives of the president and the vice president.

Out of all ten political appointees, one, Susan Chagwa, was stated by the OSGF to have resigned from office. The date of resignation was not recorded, and it is not stated whether or not she has been replaced.

The remuneration package laid down by the Revenue Mobilisation Allocation and Fiscal Commission (RMAFC) provides for special assistants and personal assistants to various office holders, such as the president, vice president, and ministers.

The document, however, fails to specify exactly how much goes to these assistants; rather it states that the figure will be provided, “tbp”.

However, it is conceivable that the ten special assistants to the wives of the president and vice president earn as much as special advisers, therefore by the end of July, 2018, N4.4 billion will have gone to them as basic monthly salaries and allowances.

The appointment of Hajo Sani, Senior Special Assistant on Administration to the Wife of the President, found its way into public knowledge only because the University of Maiduguri Class of ’78 placed an advert in the newspaper to congratulate her. And this happened a month and two weeks after the appointment was made.

NOT MUCH HAS CHANGED

In January, 2015, when Aisha Buhari stated the activities she would be inclined to perform as traditional duties of a president’s wife, she mentioned receiving guests, visiting orphanages, helping the less privileged, malnourished children and so on. However, since her husband assumed position as the country’s number one citizen, she has gone on to do much more.

In August, 2015, Punch reported [though the web page is no longer available] that the president’s wife has been operating from the Office of the First Lady located inside the Presidential Villa, Abuja. The paper further reported that asides the title preference, nothing significant has changed from the previous administration. Just as under her predecessor, Aisha’s office is occupied by staff members, aides, security details and protocol officials, attached to her.

Her office has also organised several events, including a thank-you dinner in honour of APC women and youth, children’s day celebration, eid-el-fitri children’s party, national workshop on war against abuse, and, in conjunction with a UK-based private firm, a seminar on protocol, etiquette and security for wives of state governors.

Leaked invitation cards to some of these events and lecterns used by Aisha in the past to deliver speeches have on them an official seal for the “wife of the president, federal republic of Nigeria”.

The ICIR went through the 1999 Constitution of the Federal Republic of Nigeria to confirm if truly there is no statutory office for either the first lady or the wife of the president. In all 320 sections of the law and the schedules that follow, there is no single mention of the words ‘wife’ and ‘lady’.

Femi Falana, Senior Advocate of Nigeria and human rights activist, has also confirmed this. “The post of the First Lady is not a creation of the constitution,” he said, in an interview.

“In other words, there is no mention or reference to the post in the constitution or any other statute in the land. So, the question of assigning responsibilities to the office does not arise. In the first and second republics, there was no office of the First Lady.

“Even under successive military regimes up to the Muhammadu Buhari/Tunde Idiagbon era, the post was unknown. It was under the Gen. Ibrahim Babangida junta that the wife of the military president created the post, albeit illegally. There was no decree to back it up.”