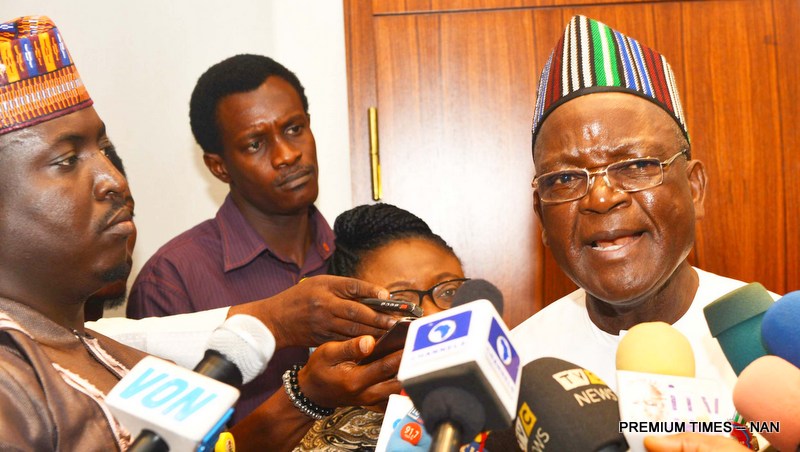 Governor Samuel Ortom of Benue state has announced his defection from the ruling All Progressives Congress (APC) to the main opposition, the Peoples Democratic Party (PDP).

His spokesperson, Terver Akase, confirmed the move to PREMIUM TIMES.

“Yes, he has defected from APC to PDP,” Mr Akase said by phone Wednesday.

Tahav Agerzua, a media adviser to the governor, also told PREMIUM TIMES his principal complained that the APC was no longer a platform that had the interest of the people of Benue at heart.

“He now believes that his aspiration and the plight of Benue people would be better realised in the PDP than the APC,” Mr Agerzua said.

A spokesperson for the APC was not immediately available for comments.

Mr Ortom earlier made the announcement at a meeting with elected local government chairmen and councillors on Wednesday at the Government House Makurdi, Channels Television reported.

Also, on Tuesday, scores of APC federal lawmakers dumped the party, with a substantial majority moving to the PDP. Some of the lawmakers were from Benue.

Mr Ortom has been hinting at his imminent departure from the ruling party for the past four weeks. He was amongst at least three APC governor rumored to be on their way out of the party, with the other two being Abdulfattah Ahmed of Kwara and Aminu Tambuwal of Sokoto

The governor joined the APC from the PDP ahead the 2015 elections. He served as Minister of State of Industry, Trade and Investment during the Jonathan administration.

Mr Ortom was earlier a member of the defunct All People’s Party (APP) before joining the PDP.

He served as the director of operations of the PDP gubernatorial campaign in Benue State in 2007, and later as director of administration and logistics of the Goodluck/Sambo Presidential Campaign Organization in 2011.

He is also a former national auditor of the PDP.

VIDEO: “I will negotiate, persuade, talk but not derail from core principles of APC” – Oshiomhole