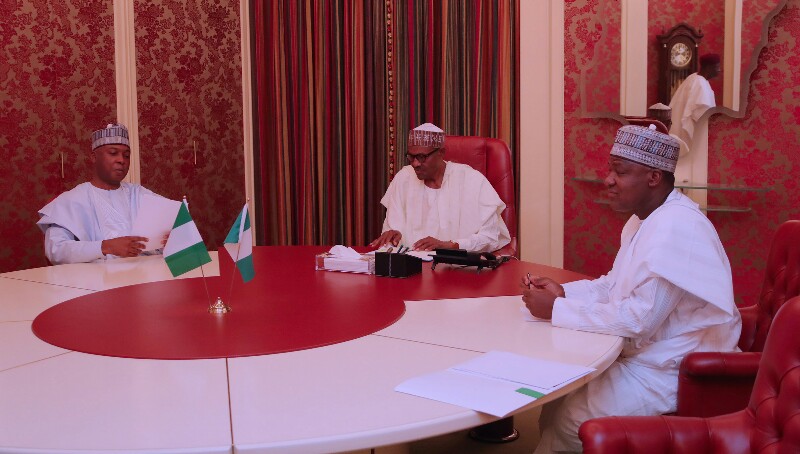 EXCLUSIVE: How Buhari’s loyalists plotted, failed to take over Senate

The melodrama in Abuja, Nigeria’s seat of power Tuesday morning was part of a grand plan by persons loyal to President Muhammadu Buhari to execute a ‘coup’ on the Senate leadership, multiple sources told PREMIUM TIMES.

Sources familiar with the plan provided PREMIUM TIMES with details of the operation that went awry.

Nigerians woke up Tuesday morning to stories of security sieges on the residences of Nigeria’s Senate President, Bukola Saraki, and that of his deputy, Ike Ekweremadu.

Mr Saraki later relieved the saga to his colleagues, saying he escaped on the “intervention of the almighty God”.

The execution of the plot began Monday night with the police divulging the content of a letter by Inspector General of Police, Ibrahim Idris, inviting Mr Saraki for questioning.

Mr Saraki was invited in connection with the recent Offa robbery incident which occurred in his state of Kwara in April.

The Police had in the aftermath of the incidence alleged links between the suspected robbers and Mr Saraki.

An earlier invitation to Mr Saraki to appear before police investigators was suddenly withdrawn and a written explanation from the senate president demanded instead.

The letter on Monday said Mr Saraki was needed to clarify aspects of his statement. He was ordered to report to the police at 8 a.m. on Tuesday. Mr Saraki said the letter was delivered to his office at 8 p.m. on Monday.

However, as Mr Saraki’s convoy reportedly planned to leave his house for the police’s offices, a detachment of police personnel blocked the convoy.

A security source familiar with the matter told PREMIUM TIMES the plan was for Mr Saraki to be arrested by the police at that point.

In what appeared more like a choreographed happenstance than a coincidence, operatives of the Economic and Financial Crimes Commission (EFCC) arrived at the residence of Mr Ekweremadu around the same time.

A letter of invitation signed by EFCC’s Head of Operations, Mohammed Abba, seen by PREMIUM TIMES, requested Mr Ekweremadu to report to the EFCC at 10 a.m. Tuesday. The letter was dated July 24 (today).

The commission said it was inviting Mr Ekweremadu in connection with a case of “conspiracy, abuse of office and money laundering” which it claimed it was investigating.

“This commission is investigating the above mentioned case in which your name feature prominently and the need to obtain certain clarification from you become imperative,” the letter partly reads.

A government source told our reporter that afraid the Senate was bent on carrying on a mass defection plan, some loyalists of President Buhari in the red chamber sold the idea of taking over the Senate leadership to some officials of government.

That was after spirited attempts to stop the exodus by the new leadership of the All Progressives Congress (APC) and President Buhari looked fruitless.

To achieve this, the police, which had kept mum on its investigation of the Offa incident for over a month, was mobilised to revisit the Offa robbery matter by inviting Mr Saraki and then detaining him pending the execution of the take-over plan at the Senate, our sources disclosed.

The EFCC was allegedly also tapped to arrest Mr Ekweremadu, effectively leaving the Senate without a presiding officer.

The spokesperson for the Police, Jimoh Moshood, and EFCC’s head of publicity, Wilson Uwujaren, could not be reached to clarify their organisations’ roles in the imbroglio.

While Mr Moshood did not respond to repeated calls placed by our reporter, Mr Uwujaren’s telephone was switched off.

The planners from the Senate, reportedly led by the Senate Majority Leader, Ahmed Lawan, had planned to use the vacuum expected to be created to invoke the Senate Rules to appoint Senate President pro-tempo, paving the way for the sacking of the two principal officers.

Attempts to get Mr Lawan failed as his known telephone line was not going through. He also did not respond to a text message sent to him.

A principal actor in the anti-Saraki camp of the Senate told PREMIUM TIMES Tuesday morning that the plan, which he described as the second attempt at taking over the Senate, after the mace theft saga, was thwarted on the altar of “hypocrisy”.

He said a few senators led by Mr Lawan sidelined other loyalists of the president, including the Parliamentary Support Group, led by Abdullahi Adamu, in executing the latest plan.

“There is too much hypocrisy and selfishness. Those who planned it wanted to be the sole beneficiaries of the leadership change,” the senator said, asking not to be named.

A decision among the senators on who succeeds Mr Saraki, in the event the plot succeeded, reportedly punctured the plan.

Two names were prominent – Mr Lawan, who was leading the putsch, and Ali Ndume, a former Senate Leader who was removed from his post and suspended allegedly at the instance of Mr Saraki.

A senator from the South-south told PREMIUM TIMES that presenting an “acceptable candidate” like Mr Ndume, who he described as a “friend of all” would have helped the cause of the Buhari loyalists.

Mr Ndume however claimed ignorance of the plan when contacted Tuesday afternoon.

“I just got back to Abuja last night. I cannot comment,” he said.

“Some of us told them that it would be illogical and it amounted to insensitivity to take the Senate president slot to the North-east, the same zone as the Speaker of the House of Representatives,”another APC senator explained.

“And since the speaker [Yakubu Dogara] is very strong at the House pf Representatives and there is nothing we could do about him, the best thing was to keep the Senate President position in the North-Central.”

The altercations over who takes the throne eventually led some of the involved in the plot to leak the plan to Mr Saraki who acted fast to counter it.

Although PREMIUM TIMES is yet to get details of how Mr Saraki made it to the National Assembly despite the siege on his convoy, a source close to the senate president said Mr Saraki actually sold a dummy to the Police.

“He was not in the convoy. By the time they were holding the convoy at Lake Chad [Crescent] the SP was already at the National Assembly,” the aide say. He asked not to be named because he was not authorised to make that disclosure to the media.

Another source told PREMIUM TIMES that Mr Saraki stayed away from his house for the night, after learning  that the plan to oust him would be executed Tuesday morning.

Mr Saraki later surfaced at the Senate, and presided over plenary.

Fifteen senators announced their decamping from the APC at the sitting. Mr Ekweremadu could not attend as he was prevented from leaving his home.  That blockade was lifted only after the day’s Senate sitting ended.