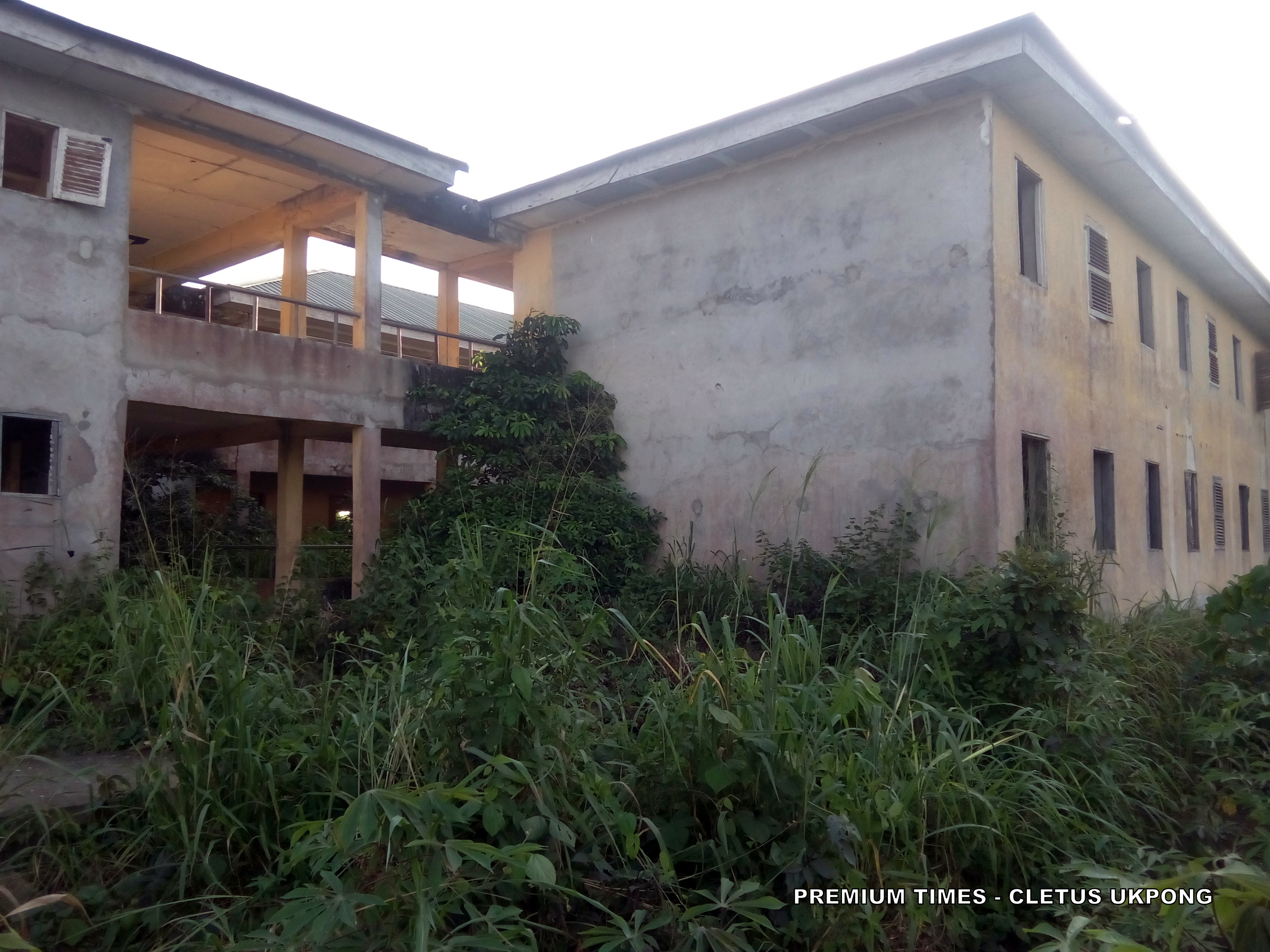 Another multimillion naira college abandoned by the Akwa Ibom state government has been discovered in the state, few weeks after PREMIUM TIMES revealed how a top technical college in the state has been shut down and left to rot away for more than seven years now.

PREMIUM TIMES recently ran an investigative series on the poor state of public schools in the oil-rich Akwa Ibom state.

The latest discovery, located at Issiet Ekim community, Uruan Local Government Area of the state, is one of the model science and technical schools conceived and built 15 years ago by the administration of Victor Attah, the second civilian governor of the state.

The college, which covers a large expanse of land, and has more than 30 buildings, including classroom blocks, dormitories, and staff quarters, has never been put to use after its completion.

It is unclear why the Akwa Ibom state government has refused to make use of the school.

Because it has been abandoned for more than a decade now, the college premises has turned into a thick bush.

Women and children were seen farming in some parts of the school premises when this reporter visited the place on Friday.

“We are still thinking of what we can do to get the government to come and start the college,” Iyire Abasi, a community chief and a member of the Issiet Ekim Village Council, told PREMIUM TIMES.

The chief said the village has written several letters to the state government, and the lawmaker representing Uruan in the Akwa Ibom State House of Assembly. The community is yet to get a response from the government, he said.

“It worries us in the village that government could build such a school, with so many beautiful structures, and then abandoned it just like that.

The chief said since there was no public secondary school in Issiet Ekim, their children travel a distance to other neighbouring villages to attend school daily.

The member representing Uruan State Constituency in the Akwa Ibom State House of Assembly, Anekan Bassey, did not respond to calls and text message sent to his phone line.

When PREMIUM TIMES contacted the Commissioner for Education in the state, Victor Inoka, he said the government would soon “reactivate” the school.

The Attah administration had built similar colleges at Ikot Ntuen in Oruk Anam, and other parts of the state.

The one at Ikot Ntuen was also abandoned and left to rot away for several years until the Nigerian Navy acquired it and turned it into a military school in April this year.

“The Nigerian Navy Military School (NNMS) Ikot Ntuen was originally meant to be a Technical College by the Akwa Ibom State Government. The School was built Fifteen years ago by the then Governor of the State Obong Victor Attah.

“The Technical College never took off as envisaged and the partially completed structures were left to deteriorate,” the navy said on the school website.

Today, the facilities in the school – the administrative block, officers’ accommodation, students’ hostel, kitchen, sickbay, assembly hall and the classrooms – have been renovated and put to use through the assistance of the Governor Udom Emmanuel-led administration.

Back to Uruan. At Adadia community, a few kilometres from the abandoned model college, the only government secondary school in the area is in need of urgent help – the three classroom blocks, including the small-size administrative building, are all dilapidated.

A room in the main school block is unfittingly labeled ‘Physics Lab’. It has no doors and no ceilings.

Except for the sinks, two school desks, and a lonely shelf, the ‘laboratory’ is completely empty. More so, it is flooded with water whenever it rains, because of its leaky roof.

Four buildings in the school are completely dilapidated and abandoned in a thick bush.

In contrast with others, the only attractive building at Adadia Secondary school is the school clinic built and donated in May this year by a young woman who did her National Youth Service Corp (NYSC) programme in Uruan.

The donor, Esther Akpan, told journalists that in the course of her national service she had realised that many schools in Uruan didn’t have health posts, and also that school children were sitting on bare floor to learn.

Mrs Akpan, a graduate of Zaporozhye State Medical University, Ukraine, also set up sickbay in two schools, as well as donated desks to another school in the area.

She narrated an experience that inspired her to embark on the community development projects.

“We were on a community development service at community secondary commercial school, Ifiayong Usuk to enlighten the students on sex education.

“I was selected as one of the speakers. While we were interacting with students in a class, suddenly the whole school became rowdy; the students were shouting and running to and fro. We were all distracted. Classrooms suddenly became empty. We were scared.

“The next thing I heard was, ‘please, where is that corps doctor?’ Behold it was the compound mistress. I was the only corps doctor among us. I ran to her and she said to me, ‘please come and help us, a female student has slumped’. I demanded for a first aid box, but she said they didn’t have it. The principal came out and said ‘take her to her parent’. I turned and asked the principal, ‘madam, what if she dies on the way?’

“She said to me, ‘Corper, as you can see, we don’t have any medical facility, government has not provided that for us’.

“I was confused. As a medical doctor, I knew the child might die. So, I decided to rush her to Nigerian Medical Association Clinic, which was my place of primary assignment. That was where we resuscitated her”.