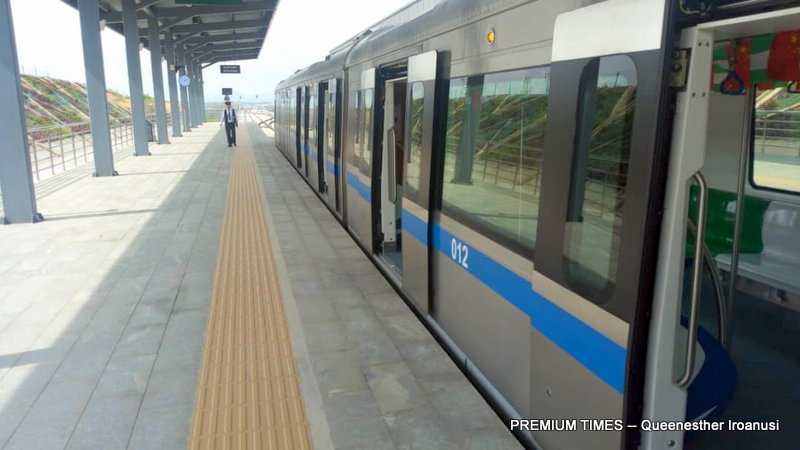 President Muhammadu Buhari on July 12 commissioned a new light rail for Abuja. The inaugurated project, he said, is the first phase of the rail line which will cover 12 other stations within the federal capital territory.

Mr Buhari said the project was in line with the Change Agenda of the government to ensure prudence in the management of public resources as well as value for money.

While hoping that a modern rail service would boost the economy and enhance social life, he said the commissioning of the railway was evidence that the federal government was delivering on its promises.

According to the Minister of the FCT, Musa Bello, the Abuja rail is divided into six lots with a total length of 290km.

“Lot 1:​ From Nnamdi Azikwe Expressway through the Transportation Centre (Metro Station) via Gwagwa to Kubwa;

“Lot 2: ​From Gwagwa via Transportation Centre (Metro Station) to Nyanya/Karu;

“Lot 5:​From Kubwa via Bwari to Suleja and

Lot 6:​From Airport via Kuje and Gwagwalada to Dobi,’’ he explained.

Two days after the light rail was launched, PREMIUM TIMES visited the station and it was empty.

“You cannot board a train till Monday,” a man who asked to be called ‘an official’ told this reporter. “You can only go in and take a look, and maybe take pictures,” he added.

Inside the station, friendly security officials beamed at the reporter.

One of them, identified as Sani, had been assigned to conduct a thorough search on visitors.

“You’re welcome ma,” Sani smiled again, at the end of his search.

Mr Sani then explained that full operations would be rolled out on Monday, adding that the train would move from base to Idu and then to the airport for now.

That explanation is contrary to that given by the FCT minister during the commissioning ceremony.

Apparently sensing the reporter’s disappointment that there would be no train ride, Sani quickly added that the rides would be free throughout July.

“Another reason why you should come back on Monday,” he said, the smile returning to his face again.

Monday: ready for a ride

By 12:17 p.m on Monday, this reporter returned to the train station.

This time, there were more activities at the station – a handful of people waiting for tickets; two armed soldiers to provide security; and a ticketing officer, decked in a green and yellow outfit, attending to passengers.

A supervisor, who was wearing an FCTA ID card, and clutching the station’s timetable, explained that the train would move from Abuja Metro Station to Idu and then to the airport.

He said locomotive trains were currently being used and that “they” were waiting for “diesel engines”. He said due to the kind of trains being used, the number of trips made by the trains daily would be limited.

“For now,” the supervisor said, waving the timetable in his hand, “this is how we operate.”

The next rain was due to leave the station at 2.30 p.m., and there were just a handful of passengers – no more than 20 persons – waiting.

Over a loudspeaker, an announcer, speaking with an American accent, said, “Dear passengers, in order to save time, please buy tickets at the tickets vending machine with less people or the ticket office. Thank you for your cooperation.”

No one paid the voice any heed: it was a free ride.

As the departure time approached, more passengers walked into the station.

The ride; not what was expected

The deafening horn of the train heralded its arrival and, quickly, everyone queued before a station attendant who examined every ticket, pierced it, and waved the bearer into the train.

It was a beautiful train, painted in blue and ash colours and operated by Chinese personnel.

At exactly 2.30 p.m., the scheduled departure time, the train began crawling out of the station.

Inside the coach, brightly coloured and air-conditioned, visibly excited passengers chatted at the top of their voices.

For some of them, it was a first experience on a train. But for most, it was an opportunity for photographs.

And as the train gathered a slow speed, phone cameras clicked away.

No restroom? No attendants?

Expectations were cut short when the locomotive train maintained the same speed five to ten minutes after take-off. A passenger next to me put the speed at 20-30km per hour.

That was his first disappointment passengers lamented about.

“Why is this slow? Are they still working on it? Why would Buhari commission it if it’s not properly functioning?”, the passenger quipped.

This reporter looked around to find an operator to answer these questions and hence the second disappointment. There was no attendant in sight.

It was time to use the convenience and since there was no attendant to ask for directions, the reporter strolled around the train to look for the rest room and only discovered the third disappointment. No toilet. Being just a metro train, the absence of toilet cannot be regarded as a substantial minus.

While having to deal with the “majestic” movement of the train, the reporter and other passengers comforted themselves with the sight of some Abuja residents waving at the train as it crawled past their neighbourhoods.

Twenty minutes later, the train stopped at Idu Station and the announcement that followed was not only in pidgin English but was confusing as well, to the surprise of everyone.

“We don reach Idu Station,” the announcer said. “Prepare to alight.” And after a few seconds, the announcer added, “You say wetin….”

However, five minutes later, the train resumed its crawling.

A passenger declined to provide her name had nothing but complaints about the ride.

She refused to praise the federal government for launching the light rail as she believed it should have been done “20-50 years ago.”

“We are very late. Its not something we should celebrate. Also the train is too slow, you can’t go to work with it. You can’t catch up with your flight with this. They need faster timing and more stops too,” she said.

When asked to rate the treatment given to her by the attendants, she said, “This is still a promo. They just started so everyone is being nice. I can’t say anything for now.”

She also urged the management of the station to release the travel rates for each ride.

Another passenger, David Sule, welcomed the development, saying he found it comfortable.

He, however, complained that it was too slow and that the perimeter fences around the rail tracks was too short. He called for more security checks and thorough screening in order to ensure the safety of passengers.

Another passenger said he liked the ride but would rather give the credit to former Presidents Olusegun Obasanjo and Goodluck Jonathan. He said Mr Buhari just commissioned it “because of election.”

Like the others, he complained about the speed of the train and said he could not judge the attendants yet “because they just started.”

The train got to the airport at about 3:14p.m and 90 per cent of the passengers had nothing but complaints mainly about the speed of the train.

At the airport station, the security officials, who said they were there to also respond to enquiries, were too busy to respond to questions.

Arriving at the Abuja Metro Stations again, this reporter engaged some ticketing officers about her experience on the train.

The girl apologised and said there was supposed to be at least two attendants on the train. She further said the management would place a suggestion box for people with complaints.