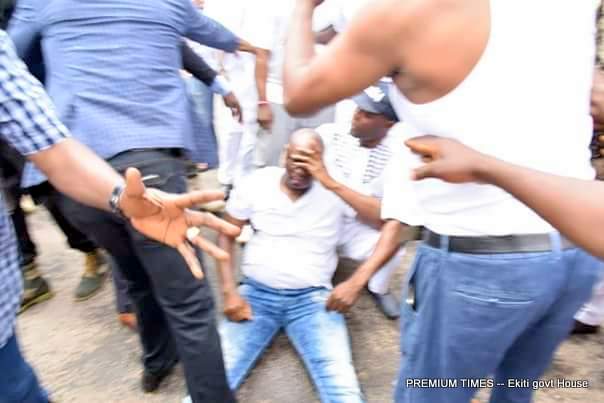 A photograph showing Ekiti State Governor, Chief Ayodele Fayose on the ground after he was attacked with tear gas and beaten by security operatives

Ekiti 2018: Why we stopped Fayose, PDP from holding rally – Police

The Ekiti State Police Command has said that it prevented a rally called by the state governor, Ayodele Faose, from holding on Wednesday to forestall the outbreak of violence between the two leading political parties.

It also claimed that it was not true that its personnel invaded the government house or blocked the entrance to the complex.

The Police Public Relations Officer, Caleb Okechukwu, in a statement he signed on behalf of the Deputy Inspector General of Police, Operations, Habila Joshak, on Wednesday, said the public should discountenance the allegations that it attacked the governor and invaded his office.

The statement described the allegation as “misleading and aimed at causing anxiety in the minds of the public.”

“In furtherance to the presence of police officers around the Prof. Olusola Eleka Pavilion at Fajuyi today, two political parties intend to have their rallies at the same date and in Ado-Ekiti metropolis,” the statement said.

“But the Commissioner of Police advised the political parties in writing on the need to have their political activities at different time and because of its security implication.

“The police will, at all times, continue to maintain law and order and also rise up to their responsibility to perform their mandatory and statutory duty of protection of lives and property of innocent citizens before, during and after the election.

“The police would also want to use this medium to alert the general public that they should expect more of this misleading information from person(s) who do not mean well for the good people of Ekiti State.

“The police enjoin the general public to confirm the source of their information before circulating same to their friends or loved ones.”

However, when PREMIUM TIMES reached the Publicity Secretary of the All Progressives Congress, Taiwo Olatunbosun, he denied knowledge of any plan by his party to use the pavilion on Wednesday for a rally given that the party held its grand rally on Tuesday.

“I am not aware of any planned rally,” he said. “Nothing of such has been brought to my notice.”

PREMIUM TIMES reported how hundreds of police officers barricaded the venue of the PDP rally, close to the Ekiti government house on Wednesday morning. In videos of the incident that have since gone viral, the police used tear gas to disperse the PDP supporters, many of whom were putting on while based on the request by Governor Ayodele Fayose, who was also affected by the police action.

Although Mr Fayose is not a candidate in the election, his deputy, Olusola Eleka, is. Mr Eleka is the candidate of the governing PDP in the state. His major opponent is Kayode Fayemi, who was until a few weeks ago, the minister of solid minerals.