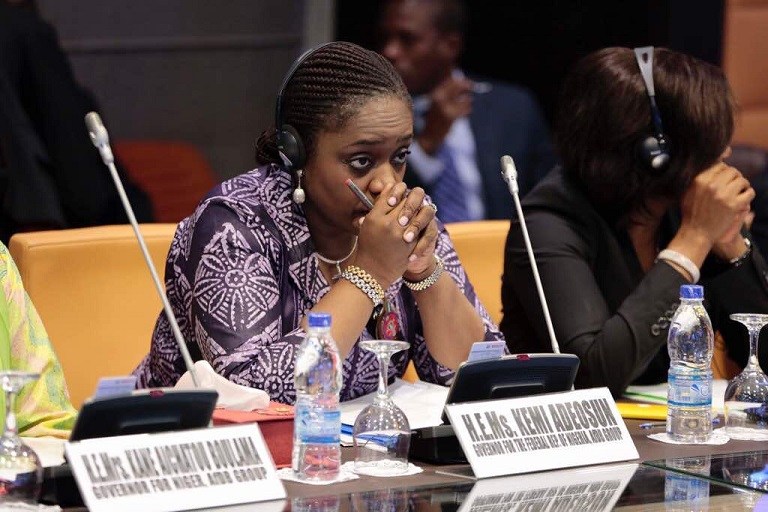 EXCLUSIVE: Pressure mounts on NYSC to cover up #AdeosunGate

The National Youths Service Corps (NYSC) has come under intense pressure since the publication of an  exclusive story by PREMIUM TIMES exposing how finance minister, Kemi Adeosun, avoided the obligatory national service and fraudulently obtained an exemption certificate.

Mrs Adeosun, who graduated at 22 in 1989 from the University of East London, ought not to have been issued with a Certificate of Exemption of the service. The minister does not fall in the category of those entitled for exemption.

The story has generated outrage from Nigerians who asked the minister to resign from her post or be fired by President Muhammadu Buhari.

Details published by this newspaper on Monday showed that the purported certificate was among the set of documents submitted by the minister for her appointment and screening in 2015.

NYSC management on Monday issued a rather vague press statement distancing itself from the certificate paraded by Mrs Adeosun, but at the same time claiming it was investigating its source. It confirmed the minister had applied for the certificate.

Mrs Adeosun is yet to respond to the issues raised, 72 hours after publication of the story.

Many Nigerians were unsatisfied by the NYSC’s response with some seeing it as a first step in giving the minister a dubious cover.

PREMIUM TIMES understands that the press statement was extracted off the NYSC after a high-level lobbying and pressure mounted on the director general of the service, Suleiman Kazaure.

There are also feelers from the NYSC headquarters that some intercessors who want the matter completely covered were suggesting misplacing the relevant NYSC register as a last resort.

Mr Kazaure, a brigadier general, was said to have come under severe pressure since the publication on Saturday with a governor believed to be Mrs Adeosun’s godfather repeatedly reaching out to the NYSC boss.

Also in the league to persuade the NYSC to “help the minister out” is a senior government minister. The minister is said to be working round the clock “to avert a PR disaster for the government”.

The two politicians are said to be playing the cards of national interest and the need to save the government from embarrassment to the director general.

Mr Kazaure is said to have resisted the initial pressure but was later cajoled to give a non-committal statement pending the presidency taking final position on the matter.

“If you read the NYSC statement it is non-committal at all, although they tactically disowned the document,” said a source familiar with the issues. “They can come out tomorrow and say even though the woman applied, no certificate was issued. But if the pressure is sustained they can own up to the flawed certificate.”

The atmosphere at the NYSC secretariat was charged throughout Monday with senior officials locked in winding meetings to find a solution to the scandal at hand.

Two senior staff of the NYSC lamented their predicaments on Monday but none of them would reveal detail of what transpired in the series of meetings held at the headquarters of the service.

One of them confided that the day was hectic and horrible with clear demands for officials to find a way out for the minister.

“We senior people in NYSC are now caught in the web of intrigues,” one official said. “We don’t know how it will end but we are praying to God to help us. It has not been easy with us at all.”

Officials at the Certification Department agreed that the certificate looked suspicious, if not outright fake. One of them concluded it was fake.

Based on the directive to file a formal application, a letter requesting verification of the certificate was delivered at the NYSC headquarters on April 17. Within two days, the director general, who was the addressee, sent the request to the Certification Department for the checks.

PREMIUM TIMES was however told that the staff members responsible for the registers had gone for camping exercises and advised to check after the camps. Throughout the months of May, our reporter repeatedly made follow-ups.

On May 31 what appeared as a breakthrough came.

The register for UK graduates who were given exemptions was brought in the presence of our reporter and the officials diligently looked through the 2009 entries. It was confirmed that “Folakemi Adeosun” was not in the register.

The reporter was therefore asked to return the next day to pick up the NYSC’s response. He was given account details for payment of the verification fee of N2,000. The payment was made the same day.

On arriving June 1, our staff was directed to the NYSC’s Account Department on the fifth floor to change the Remita receipt into the NYSC official receipt. A receipt numbered 711133 was then issued.

However, on returning to present the receipt for the letter at the NYSC’s Verification Division, the story changed. The NYSC officials said the verification had been channelled to the organisation’s ICT unit to check its “electronic database”.

Frustrated by the sudden back-tracking by the agency, this newspaper delivered a Freedom of Information request to the NYSC headquarters on June 8. The FoI request was ignored in spite of the FoI Act’s provision for agencies to respond to requests within one week or write to seek extension if unable to comply within the stipulated time.

To the surprise of this newspaper, our initial request letter to the NYSC was leaked to Mrs Adeosun and her handlers who pressured PREMIUM TIMES reporters, editors and owners.

PREMIUM TIMES believed the letter was leaked June 1 when the agency claimed our request was redirected to the ICT unit for electronic checks.

For days, this paper’s staff came under undue pressure over the story, including attempts at compromising those thought to be working on the report and the management.

Around this time, the NYSC became non-responsive and officials started evading our reporters both on telephone and in their offices.

“That the story saw the light of the day shows the sacrifices the reporter and the editors have made in favour of upholding the truth,” said PREMIUM TIMES managing editor, Idris Akinbajo.

Mr Akinbajo however said it was not yet time to reveal the full details of “the back story and the undercurrents” that preceded the publication.