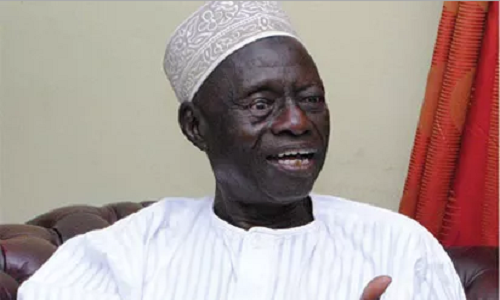 Buhari, Obasanjo, Atiku, Dickson, others mourn as Adamu Ciroma passes on at 83

Condolences and tributes poured in Thursday for the family and memory of Adamu Ciroma, a foremost Nigerian politician who died on Thursday.

Mr Ciroma, a career journalist, historian and bureaucrat in the later part of his career, died at the Turkish Nizamiye Hospital in Abuja around noon, according to his family members. He was 83.

His political associates and proteges took turns with their tributes, which trickled in Thursday night.

Mr Obasanjo in a letter dispatched to Maryam Ciroma, wife of the late politician, said the development could not be aptly captured with words.

“While words are hardly enough to express our sympathy at this time, you can definitely take justifiable pride in the fact that your late husband was a statesman who gave of his best to his fatherland. He will be sorely missed by all of us,” Mr Obasanjo said in the letter, a copy of which was made available to PREMIUM TIMES.

“I, therefore, extend on behalf of my family and on my own behalf our sincere condolences on the transition of your beloved husband and pray that the Almighty Allah grant you and the family the fortitude to bear the irreparable loss,” Mr Obasanjo said.

Mr Ciroma served as the Minister of Finance through Mr Obasanjo’s first term as a democratically-elected president from 1999 to 2003. Mr Ciroma was amongst the founding members of the Peoples Democratic Party, PDP, in 1998, under which Mr Obasanjo would later be elected president in February 1999.

President Buhari commiserated with the deceased’s family and hailed his memory as one that would be remembered for decades to come.

A statement signed by presidential spokesperson, Garba Shehu, recalled Mr Ciroma as “a political leader and federal cabinet minister for Industries, Agriculture and Finance, at various points in his remarkable life,

He “will be long remembered for his remarkable service and dedication to the country’s unity, progress and stability,” the statement said.

Mr Shehu said the president would honour Mr Ciroma for his contribution towards the advancement of Nigeria’s democracy.

“President Buhari also affirms that the late former CBN Governor will be honoured too for his contributions in promoting democracy in Nigeria and his legacies should be a constant reminder to politicians who wish to work for the good of their communities and our great country,” the statement said. “The President prays that Almighty Allah will grant Malam Ciroma eternal rest and comfort the elder statesman’s family, relatives, friends and associates.”

For Mr Abubakar, the passing of Mr Ciroma struck too close to home.

“A lot of what I have turned out to be in life today was as a result of the early contacts and mentorship that I had with Adamu Ciroma, who graciously offered me vacation job in my formative years”, Mr Abubakar said in a statement by his media office.

“He was an astute politician, bureaucrat and banker who served Nigeria selflessly. His honesty and patriotism were among his greatest virtues – and he has left behind an untainted public service record for which he would always be remembered,” Mr Abubakar added.

Mr Abubakar was amongst the last politicians to see Mr Ciroma before his demise. The former vice president visited him at the hospital on Tuesday while he was in coma, his spokesperson, Paul Ibe, told PREMIUM TIMES earlier on Thursday.

Mr Saraki described the development as a huge loss to the country.

“The passing of Mallam Adamu Ciroma is a monumental loss to the country,” the top lawmaker said in a statement. “Although death is painful, it gladdens my heart that late Ciroma lived a worthy and successful life. We shall miss him greatly.”

In a statement on behalf of himself and the House of Representatives, Mr Dogara saw Mr Ciroma as “an epitome of integrity.”

“Indeed we lost a great man, a patriot, leader par excellence and a shining star. Malam Adamu Ciroma was one of the few surviving close associates of the late Prime Minister, Sir Abubakar Tafawa Balewa, and the late Premier of Northern Nigeria, Sir Ahmadu Bello and he remained a consistent advocate for the struggle to see Nigeria achieve the dreams of her founding fathers”.

“He was an intellectual genius and highly cosmopolitan public servant who exhibited high sense of patriotism, passion and enthusiasm for the progress and development of the country while serving as first indigenous Editor and Managing Director of New Nigerian Newspaper, CBN Governor and Minister of various portfolios in different administrations in Nigeria.

“He was indeed a rare Nigerian, accomplished administrator, uncommon patriot and distinguished elder statesman, who lived an eventful, exemplary and accomplished life worthy of emulation,” the Speaker said.

From Bayelsa, Mr Dickson said Mr Ciroma did not pass on at the right time for the larger Nigerian populace.

“We have lost a rare patriot and a nation builder. Mallam Adamu Ciroma passed on when his selfless services and wise counsel were most needed,” the governor said. “He has played his part in life very well. In and out of public service, he was a true Nigerian who rendered selfless service to fatherland.

“I urge Nigerian politicians to emulate his life of Service. I pray God to grant his family, friends and associates the fortitude to bear what is clearly an irreparable loss,” he added.

“Ciroma was a respected leader, who rose to serve Nigeria meritoriously when the occasion demanded,” Mr Obaseki said in his condolence message.

“This can be gleaned from the number of public service offices he held and the panache with which he dispensed his roles,” the governor added. “I hereby extend my condolences to the government and people of Yobe State, his hometown, Potiskum, and his immediate family. I pray that God gives them the fortitude to bear the loss.”

Mr Ciroma was buried on Thursday night following a Muslim prayer that was attended by Mr Saraki and other dignitaries at the An Nur Mosque, Abuja.

1000 public servants for retirement in Anambra, Enugu in 2019 – PENCOM