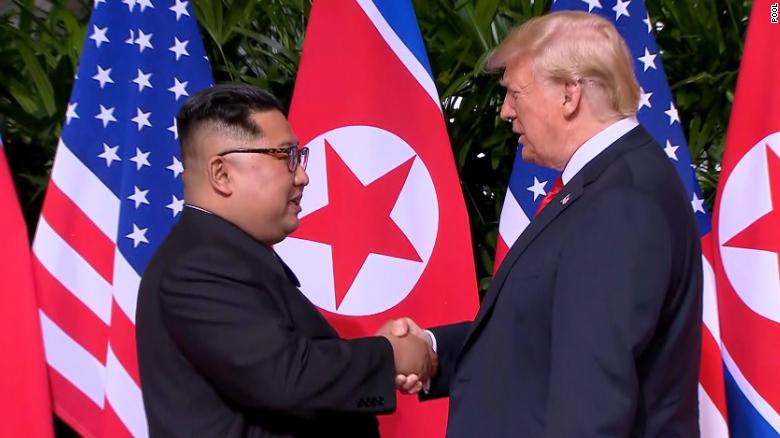 A sitting American president and a North Korean leader had a one-on-one interaction at a historic summit in Singapore Tuesday.

The historic handshake was in front of alternating U.S. and North Korean flags which were specifically arranged for the moment.

The two leaders then took a stroll to an exchange with reporters.

“We will have a terrific relationship,” Mr Trump said, adding that he had high hopes that the meeting would be a success.

“The way to get here was not easy,” his North Korean counterpart responded. “But we overcame all the obstacles to get here.”

The two leaders shook hands again for more than 10 seconds before ending the press briefing.

They will go into a private meeting which would have only them and their translators present.

Later on, an expanded bilateral meeting and a working lunch will be held.

Although several analysts said it was difficult to predict how the talks would go because neither side was fully prepared for its specifics, they are expected to focus on denuclearisation, security and economic assurances for North Korea, and ways to improve bilateral relations.

North Korea has been a secluded country for decades, but its attempt to join the world stage, now demonstrated with Mr Jong-Un’s trip to Singapore, could end it’s isolation and bring prosperity to its people.

The country is seen as one of the most repressive in the world, with its people living very poor and hundreds of thousands imprisoned for their political views.

Today’s meeting comes largely as a surprise to most people across the world. This time in 2017, North Korea was testing ballistic missiles, and Mr Trump and Mr Jong-Un were trading threats and insults.

Now, both sides are talking peace, based on the denuclearisation of the Korean Peninsula.

Mr Trump first announced plans for a summit with Mr Jong-Un on March 8 after South Korean diplomats relayed an invitation from North Korea.

Mr Trump said he accepted the invitation in a major surprise to Americans. After initial silence from North Korea, it was later acknowledged that the summit may hold in early April.

The U.S. Secretary of State, Mike Pompeo, made two trips to Pyongyang, the capital of North Korea, where he personally met with Mr Jong-Un in secret.

As part of their improved relations, North Korea released three Americans who were held in custody in May, a move largely seen as a gesture of goodwill.

Mr Jong-Un also agreed to destroy the Punggye-ri nuclear test site and followed through before a battery of Western reporters in May, although most of the reporters said they were unsure of what they actually witnessed as they are not nuclear technology experts.

For a moment on May 24, the bilateral exchanges hit a roadblock when Mr Trump wrote to Mr Jong-Un to cancel the summit. The letter followed a sharp criticism of American officials by North Korea’s foreign ministry, especially the one against Vice President Mike Pence, and John Bolton, the U.S. national security adviser.

Mr Bolton said North Korea would be given the same treatment as Libya which was compelled to give up its nuclear enrichment without much in return.

North Korea, however, responded to Mr Trump’s anger with calm, insisting that it remained committed to talks.

A few days later, Mr Trump announced that the preparations were back on and the meeting will still hold in Singapore on June 12.

Kim Yong Chol, a right-hand man of Mr Jong-Un delivered a hand-written letter from the North Korean leader to Mr Trump at the White House, earlier this month to guarantee that the summit will hold.

Both sides then intensified efforts to reach a consensus on key issues of discussion.

Mr Trump and Mr Jong-Un both arrived Singapore on June 10 for the meeting.

There is still much doubt and speculation about what the summit would achieve. Analysts believe Mr Trump cannot demand for too much because he has little knowledge about nuclear capabilities of North Korea.

Mr Trump is still expected to address the media to provide insight into what transpired between him and Mr Jong-Un at their private talks, which is expected to last two hours.

But no matter the outcome of the meeting, most commentators agree that a historic milestone was already achieved in in world diplomacy.