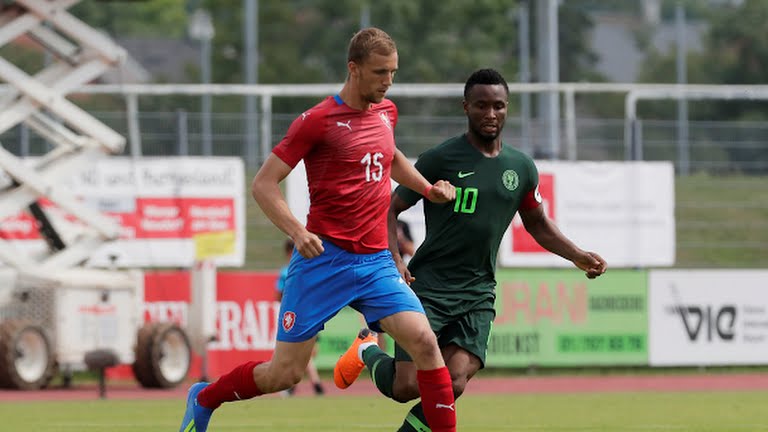 Mikel Obi slugging it out with a Czech Player (Photo Credit: Reuters)

The Super Eagles of Nigeria will Wednesday afternoon file out for what is their final test game ahead of the World Cup in Russia.

In their last three matches, the Super Eagles are yet to win any game, hence it is expected that they will be eager to go all out for a win in Vienna.

After the narrow win against Poland, the Eagles lost to Serbia and England, but pulled a draw against Congo DR.

Wednesday’s encounter at the Rudolf Tonn Stadium between Czech Republic and Nigeria will be the third official meeting between both countries.

The two previous encounters ended in a draw and victory for the Czechs.

The Czech and Nigerian national anthem being rendered

Czech Republic get the game underway

First freekick to Nigeria as Iwobi is brought down

Moses steps out to take the freekick .. Nice attempt by the Chelsea man but well saved by the Czech goalkeeper Vaclik Thomas

CHANCE!!! for Czech but danger averted

SHOT: Uzoho makes a save as Czech keep pressing

Water break for both teams.. Quite hot in Vienna

Victor Moses brought down just outside the box

Ighalo powers past the defender and unleash a deadly shot which the keeper saves. Nigeria 0-1 Czech Republic

Mikel flagged offside after getting a pass from Moses

Not too cohesive from the Eagles as the team conceded too many set pieces, especially corner kicks, from which the Czech Republic took the lead on 26 minutes through Tomas Kalas, who pounced on a rebound off Francis Uzoho. More needs to be done in the offensive third by the Eagles to get back into the game in the second half.

We are back for the second half with some changes .. super Eagles restart the game

Poor shot by Ighalo after taking so much time

Despite trailing.. the Nigerian fans have been quite vocal

Free kick for Nigeria just outside the box.. Ebuehi brought down

Uzoho makes another fingertip save

Ahmed Musa in for Victor Moses while Mikel out for Iheanacho