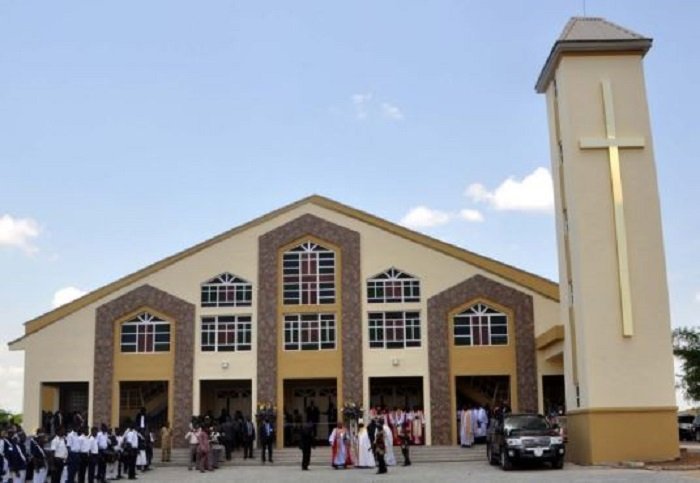 Church in Nigeria used to illustrate the story

Some aggrieved members of the Lagos Diocese of the Church of Nigeria (Anglican Communion) have filed three applications before a Lagos Division of the Federal High Court seeking, among other things, a relief for the judge handling the suit, Mojisola Olatoregun, to recuse herself from the case.

Another relief by the plaintiffs is a prayer to join one Abimbola Bode-Thomas, one of the concerned elders of the Lagos Diocese, as a plaintiff while Adebola Ayodeji Ojofeitimi, a reverend and the Provost of the Lagos Diocese, who played a pivotal role in the installation and enthronement of bishops, be made a defendant in the suit.

This is to enable them to be bound by the court’s decision, the members said.

The plaintiffs are also urging the court to restrain the defendants and their agents from taking any step to enthrone Humphrey Olumakaiye as the new Bishop of Lagos Diocese pending the hearing and determination of the suit.

The plaintiffs, who identified themselves as prominent financial members and elders of the church, are suing for themselves and on behalf of concerned members of the Lagos Diocese of the Church of Nigeria (Anglican Communion).

The case was initially assigned to Chuka Obiozor, a professor and judge at the Lagos Division of the Federal High Court, but later re-assigned to Ms Olatoregun.

However, the defendants wrote a letter to Ms Olatoregun asking her to recuse herself on the ground that she is a communicant and a devoted member of the church.

At the last hearing, the judge, in open court, transferred the case file to another judge, Rilwan Aikawa, of the same Lagos Division.

The case has now been adjourned till June 21 for hearing.

After the election to choose the next Bishop of the Lagos Diocese by the church, ten members who were dissatisfied with the process dragged the Trustees of the Church and five others before the federal court in Lagos.

In addition to claiming that the election was manipulated, the aggrieved members alleged that one of the Trustees of the church and the current Bishop of Lagos Diocese, Adebola Ademowo, should be ordered to refund N260 million he allegedly collected from the Diocese and used for his personal purpose.

In a statement of claim accompanied by statement on oath of plaintiffs, it was alleged that as Mr Ademowo’s tenure as bishop began to wind down, the Trustees of the church commenced steps towards the election of a new bishop, and Messrs Olumakaiye and Fape were nominated for the position.

Mr Finnih averred that contrary to the established principles contained in the constitution of the church which stipulates that elections are to be conducted by secret ballot, the outgoing bishop, Mr Ademowo, began campaigning for the election of Mr Olumakaiye and took various steps to influence Mr Okoh, the Primate of the Church, and other bishops who were required to vote.

These steps, the plaintiff said, included approval of the publication of photographs of Messrs Ademowo and Olumakaiye in the church’s calendar wherein the latter was described as the ‘godson’ and successor of Mr Ademowo; the distribution of cash gifts to the bishops who were to vote; as well as the exercise of undue influence on Mr Okoh.

In complaint, some of the plaintiffs, Messrs Osibo and Ajayi-Bembe, as well as another financial member of the church, Bamidele Onafeko, wrote a petition to Mr Okoh highlighting the breaches of the church’s constitution but did not receive any response.

Mr Olumakaiye was later elected as the church’s new bishop.

After the election, the plantiffs wrote another letter to Mr Okoh complaining about the irregularities that marred the electoral process.

This time, the church responded through its Episcopal Secretary and Registrar who wrote on Mr Okoh’s behalf urging the plaintiffs to desist from making such allegations.

Furthermore, the plaintiffs wrote another letter to Mr Okoh reiterating their complaints and also stating the various acts of financial impropriety allegedly committed by Mr Ademowo in office.

The allegations include causing division and hatred among members, receipt of funds from the Diocesan Board for his personal use and the placing of his family members in strategic positions.

In their letter, the plaintiffs expressed their concern that Mr Olumakaiye being Mr Ademowo’s “godson” would cover up the said acts committed by the Bishop while in office.

In his reply, Mr Okoh told the plaintiffs their letter had been forwarded to Mr Ademowo for his reaction.

In his response to the Primate, Mr Ademowo admitted the receipt of N200 million and N60 million for the construction of his personal residence and the purchase of a car respectively.

The Registrar of the Church then wrote a letter to the plaintiffs on behalf of Mr Okoh stating that their complaints as regard the financial impropriety would be referred to the Diocesan Board of Lagos Diocese and that the Dean of the Church would constitute an independent committee to consider the allegations of pre-electoral malpractices against Messrs Ademowo and Olumakaiye.

The plaintiffs averred that Mr Okoh is one of the appointors of the Dean of the Church of Nigeria, and a committee set up by him to investigate the manipulation of electoral process in which the Primate himself is implicated cannot be said to be independent or impartial.

The plaintiffs averred further that the Diocesan Board of Lagos Diocese, to which the allegations of Mr Ademowo’s financial impropriety were referred, was the body that released the sums admitted to have been received by the former bishop and, therefore, cannot possibly be relied upon to give an impartial decision on their complaints.

The plaintiffs then contended that Mr Okoh breached his fiduciary duty by failing to countenance the allegation of pre-electoral breaches made by them, and failing to prevent the conduct of the election, despite having been notified of the actions of Messrs Ademowo and Olumakaiye.

Consequently, the plaintiffs sought a declaration of the court compelling Mr Ademowo to immediately refund to the church the ₦260 million with interest at the rate of 22 per cent per annum from March 1 until full and final liquidation.

They also sought an order directing the conduct of fresh election for the position of Bishop of the Lagos Diocese.

In a notice of preliminary objection filed by four Senior Advocates of Nigeria, Bambo Adesanya, Babatunde Ajibade, Wale Olawoyin and Adeniyi Adegbomire, on behalf of Mr Ademowo, they contended that the issues raised in the plaintiffs’ action are not justifiable in a court of law.

They stated further that, even if the Federal High Court had jurisdiction to entertain the plaintiffs’ action, the court should in this case, decline jurisdiction as the plaintiffs have not exhausted the remedies provided by the constitution of the Church of Nigeria and the Diocese of Lagos before filing the action.

The lawyers further argued that it is the High Court of Lagos State that has the jurisdiction to entertain the action, adding that the plaintiffs had no legal right to institute the suit.

They, therefore, urged the court to dismiss or strike out the suit for want of jurisdiction.