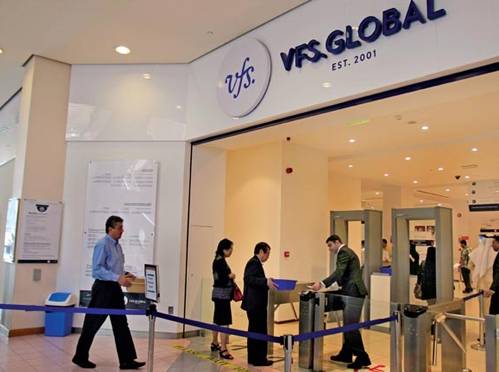 A visa processing, VFS Global, has been on the receiving end of criticisms after a PREMIUM TIMES report revealed how the company extort Nigerians who seek its services.

While angry Nigerians, civil society organisations and activists are still complaining weeks after the report was published, the company has refused to respond to the revelations.

Some accuse the company of mistreating Nigerians, saying it often indiscriminately hike its service charges as well as pose lackadaisical attitude in discharging the services paid for. Others, however, blame the country’s regulators for not setting good standard of operation for the company.

VFS Global is an outsourcing and technology services specialist for governments and diplomatic missions worldwide. The company manages visa and passport issuance-related administrative tasks for its client governments.

Since most countries find it cumbersome to create visa processing desks in their embassies, VFS Global serves as the courier between intending travellers and the diplomatic missions of the countries they are traveling to.

In Nigeria, VFS processes visas for citizens who want to travel to mostly European and African countries such as UK, Canada, Belgium, France, South Africa, among others.

What irked customers the most appears to be the “unbelievably high” service charges the company receives from applicants.

For instance, when PREMIUM TIMES commenced the investigations in November 2017, the South African Visa fee was put at N8,600. But VFS was collecting an additional N25,465 as service charge, almost three times the visa fee.

The company also collects N400 as SMS charge which applicants describe as ‘high’ complaining of not even receiving the SMS most times.

Lanre Suraj, convener of the Civil Society Network Against Corruption (CSNAC), said his organisation has been kicking against the SMS charge which it described as “fraudulent.”

Reacting to our report, he said, “I think this is actually a commendable effort on the part of PREMIUM TIMES for taking time to investigate all the circumstances surrounding the exploitative tendencies of VFS which takes undue advantage of the failure of our monitoring agencies and institutions. Quite a number of our agencies are terribly compromised that they don’t bother to do any form of check.

“The SMS charge of VFS is crazy. Going by what the director of the company said earlier, it shows VFS makes about N80 million from Nigerians annually just from SMS alone. It is also rather unfortunate that they charge beyond any control mechanism. I think for anywhere in the world , the service charge should be the percentage of the actual service. It is not reasonable to charge even 100 percent not to talk of three times the actual service rendered.

“It is important we take it up to the appropriate agencies. We need to also take these complaints to the embassies and intimate them on the exploitation by VFS because they are acting on their behalf. We need to understand if the embassies are in conspiracy with VFS to exploit Nigerians. If not then they have to withdraw from VFS, I mean there are still embassies that are operating without them.

“The problem is that companies like VFS tread on the vulnerability of many Nigerians. So many people don’t know that VFS is not responsible for the granting and refusal of their visa so they are scared of challenging them. Regulators should sufficiently educate citizens on this issue so they can know their rights.”

For Martins Obono, a frequent traveler, the activities of VFS in Nigeria should be critically probed.

“Even when you call their customer care line to log in a complaint, they will still charge you in pounds.”

Lanrey Sanusi said, “Worst about them is that your visa will get lost and no explanation. To make it worst for you, they will tell you to go to the embassy when you submitted it to them and when you get to the embassy they will tell you to go back to VFS. We have two international passports still missing for over a year now and still the same story. They lack customer service.”

MB Adegun said, “I agree that VFS extorts. To apply for a Swedish visitors’ visa, I paid N48,400. Only N21,900 goes to the Swedish embassy. The official service fee is N10,950. There is an additional courier fee (N10,950) indicated as optional on the website. But at the counter (point of application), it is not. You are mandated to pay it. Quite sad that they only accept cash. Their services and charges should be looked into.”

Olugbenga Robeerts said, “Besides the gross extortion taking place, many of us feel dehumanised, especially by members of VFS staff who may not qualify as our own messengers in our respective offices. Most travellers are treated without dignity. VFS staff will always find excuse to reject many of your documents in order to allow patronage of their in-house cohorts.

“That VFS of a company is a sell-out. The way they defraud Nigerians is so alarming, especially the SMS charges. I don’t ever pray to have anything to do with them again. Poor service, no customer care service line, you can’t complain of a staff’s ill-treatment to the superior staff and get justice.

“The bad thing is that if you don’t know how to arrange your documents in accordance to the country you are applying for visa’s requirements, you cannot rely on VFS staff to put you through,” a traveller said.

Before publishing the report, repeated efforts to get VFS Global to comment turned out a wild goose chase.

An official of the company told our reporter on two occasions then, “There is nobody available to respond to your questions.”

The telephone number listed on the company’s official website failed to connect for months and multiple calls and SMS inquiries sent to it therefore remain undelivered.

More than a week ago, this paper again sought the reaction of VFS to the myriad of complaints by angry Nigerians.

An official who was busy giving applicants directives at the gate of the company’s Abuja main office firmly told our reporter, “We have received complaints and write ups about our SMS charge and that is why we don’t talk or respond to journalists.”

After a while, he reluctantly called another official who contacted the company’s Lagos office.

The official from Lagos communication desk who simply identified himself as Deepaki on phone requested that questions be sent via two email addresses he forwarded on that Friday in a text message.

No response has come through more than a week after questions were forwarded to both email addresses. 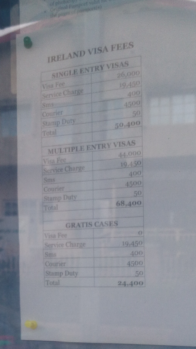 Meanwhile, another look at the information board at the VFS Abuja office still shows the company is not planning to review downwards its service charges anytime soon.

According to information on the board, the Norway Visa fee surprisingly read ‘zero’ but VFS collects N10, 750 as service charge.

In what appears a clever antic to keep evading responsibility for SMS not sent or delivered, the company even put a new louder disclaimer on the board.

“It is not the responsibility of VFS Global to ensure SMS service is received by the applicant,” the notice read. ”Our obligation is to send the SMS and we shall not be liable for any SMS not received.”