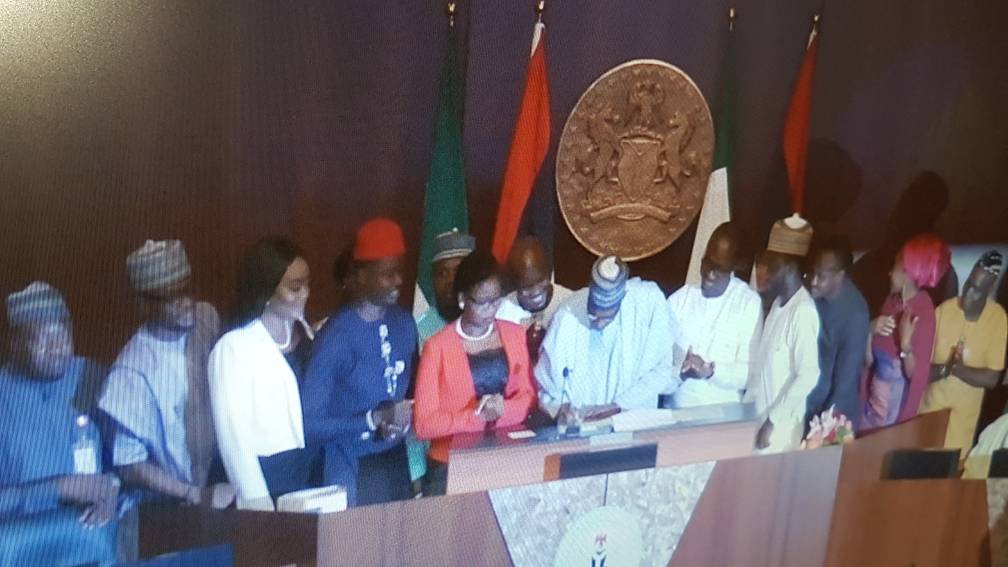 Buhari signs “Not Too Young To Run” bill

President Muhammadu Buhari has signed the “Not Too Young To Run” bill into law.

The president signed the bill on Thursday inside the Council Chamber of State House Presidential Villa, in the presence of selected invited youth from across the county.

Mr Buhari on Tuesday assured Nigerians that the ‘Not too Young to Run Bill’ will be signed into law in a few days’ time.

However, in a brief remark after he signed the bill, Mr Buhari told his audience comprising representatives of young persons from the 36 states and Abuja that “You can aspire for President but Please postpone your campaign till after 2019 election.”

Mr Buhari disclosed in his Democracy Day speech which aired on Tuesday at “In few days to come, I will be joined by many promising young Nigerians to sign into law the “Not Too Young to Run” Bill.”

The president, however, said in the bill presented to him for assent, there was no reduction in the age requirement for the office of senators and governors, indicating that age would still be left at 35.
He said he hoped it will be looked after eventually.

Lawmakers also approved independent candidature in the new law. It was part of a wider constitutional amendment process which the National Assembly carried out last year.

Since its passage in July 2017 by the National Assembly, about 25 states, representing more than two-thirds of the country’s 36 states, had adopted the bill as at March ending.

It was the outcome of relentless efforts by a coalition of more than 40 youth-based initiatives across the country.