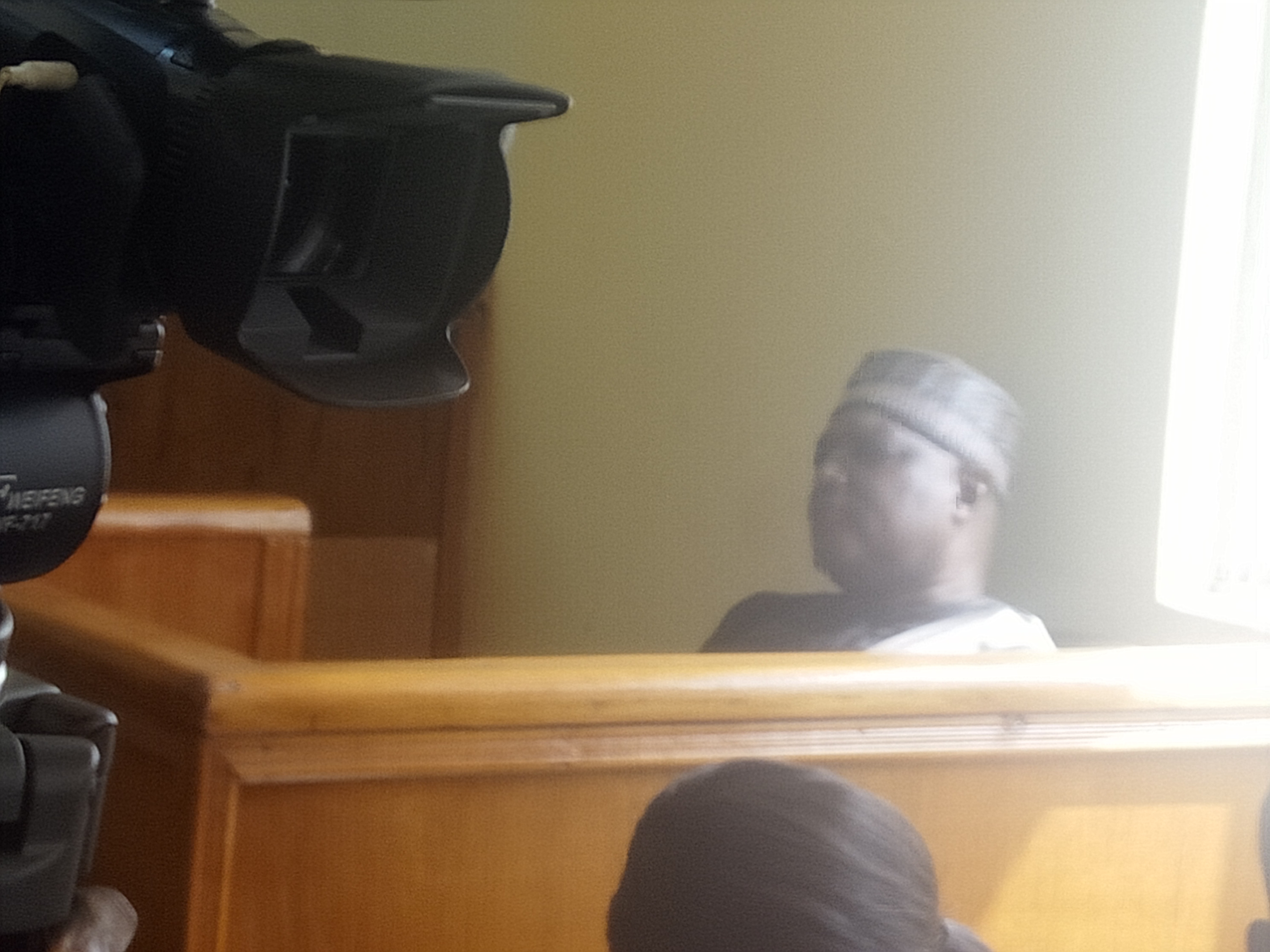 Mr Nyame after the ruling. The governor waited for over 20 minutes before leaving the court room

A High Court of the Federal Capital Territory on Wednesday ordered the refund of monies diverted by former Taraba State governor, Jolly Nyame, after sentencing him to 14 years in prison.

The former governor was charged by the Economic and Financial Crimes Commission for allegedly diverting N1.64 billion in May 2007.

In a 41-count charge of fraud, the commission accused Mr Nyame of spearheading the fraudulent transfer of funds from the Taraba state’s treasury to a company, Saman Global for the purchase of office equipment and stationeries that were never delivered.

He was also accused of fraudulently enriching himself and abusing public trust.

In a lengthy judgment which lasted over five hours, the judge Adebukola Banjoko gave a holistic overview of the testimonies given in court which resulted in the judgement.

As the ruling was read, Mr Nyame who had been asked by the judge to stand, seemed unfazed. After the session, he spent more than 20 minutes before leaving the court.

In her address, the judge identified various confessions of fraudulent transactions and said the evidences against the defendant were overwhelming. According to the judge, even the defence witnesses alluded to the crimes contained in the charge against the defendant. She likened the conduct of the prescribed offences to the story of Alibaba and the forty thieves.

“From the evidence alluded in court, transactions by the treasury of the Taraba State government begin with a memo. Now a memo has a root course that is traceable to a decision,” said the judge who added that where the said memo becomes a proven source of questionable transactions, it would only be natural to trace the said memo to its source.

The judge also questioned the failure of Mr Nyame to investigate the illicit flow of funds under his watch adding that Mr Nyame confirmed in court that he never conducted any such investigation.

“It is only under cross examination that the defendant said he did not carry out the investigation, because the EFCC was already carrying out a similar investigation.”

The judge further noted confessions by witnesses, including the managing director of Saman Global that the company was not involved in the delivery of stationaries.

“If Saman Global has no history of supplying stationaries into Taraba State, then their injection into the flow must have been questionable.

Mrs. Banjoko narrated the testimonies of Mr Nyame’s commissioner of finance, Abubakar Tutari who spearheaded the many cases of administrative breaches in the transfer of the funds to Saman global.

The judge said although the defendant denies knowledge of the transactions, it is either that he; (Nyame) or Mr Tutari has lied to the court.

“It is a question of Alhaji Tutari’s words against that of the defendant. So the golden question is who lying among the two of them. Because somebody is lying.” said the judge.

“It is imperative to bring to the fore, the background of Ababakar Tutari. According the defendant, he was serving a senator of the federal republic of Nigeria. Alhaji Tutari said he had known the defendant since 1992 when he was speaker of the Taraba state house of assembly.

Their relationship sprang from that time till when he was governor, in 1999. During this period, he served as commissioner in four ministries, namely; finance rural development water resources sport and youth development. So they were close,” Mrs. Bankole said.

The judge further noted that Mr Tutari who had told the court that the defendant was his benefactor had also indicated his willingness to not bite the finger that fed him.

Yet following the testimonies of witnesses in court, the judge noted that Mr Tutari bypassed the permanent secretary and instructed the accountant to pay N250 million.

“By this act, Alhaji Abubakar Tutari certainly had cloud to have pulled the rug from under the feet of the ministry of finance. One thing alone is certain, he was not appointed by the people of Taraba state, but by the defendant who was elected by the people,” said the judge.

“The audacity of the defendant to direct the payment of N180 million out of N250 million shows he had more than a casual interest,” said the judge who added that the defendant likely knew that Saman Global was not meant to deliver the said good.

“In granting the approval, it means he ratified the administrative recklessness,” the judge said, adding that the clear purpose of the money was diverted.

Citing another testimony, the court said there was no reason for a separate approval of N165 million to the account of Saman Global for a delivery that was also never made.

“Without delivery any stationaries, Saman Global received N345 million in five weeks, between January, 7 to February, 14 2005. The progenitor of this impunity is no one else but the defendant.

“Virtually all the witnesses, including the defendant confirmed that he is the approver of the memo. If so, he who approves should be responsible for what he has approved. There is no way the defendant having a sense of responsibility could not have queried the fact that such approvals were made within a space of five weeks. Did he question why the stationaries were never delivered? Did he institute a court action? He did nothing, thereby betraying trust bestowed on him,” the court ruled.

Mrs Banjoko therefore found the defendant guilty of 27 of the counts, bothering on allegations of criminal breach of trust, receiving of gratification, obtaining without due consideration and misappropriation of public funds.

Before reading the verdict, the defence counsel prayed the court to consider the fact that the convict had never being convicted of such offences and that he was a family man who had served his state four at least eight years.

The prosecution counsel, Oluwaleke Atolagbe however urged the court to consider the effects of the charges on the people of Taraba and the need to set a precedence that would prevent future occurrences.

Mrs. Banjoko while stating her ruling expressed disappointment at the conduct of the accused.

“But I must say that I am morally outraged by the facts of this case. The people of Traba State had elected the defendant, a clergy man, on three different occasions.

She therefore sentenced the defendants to various terms based on the four category of offences, to a maximum of 14 years in jail, without an option of fine.

The judge ordered the immediate return of forfeited funds from the treasury of the EFCC to that of Taraba State.