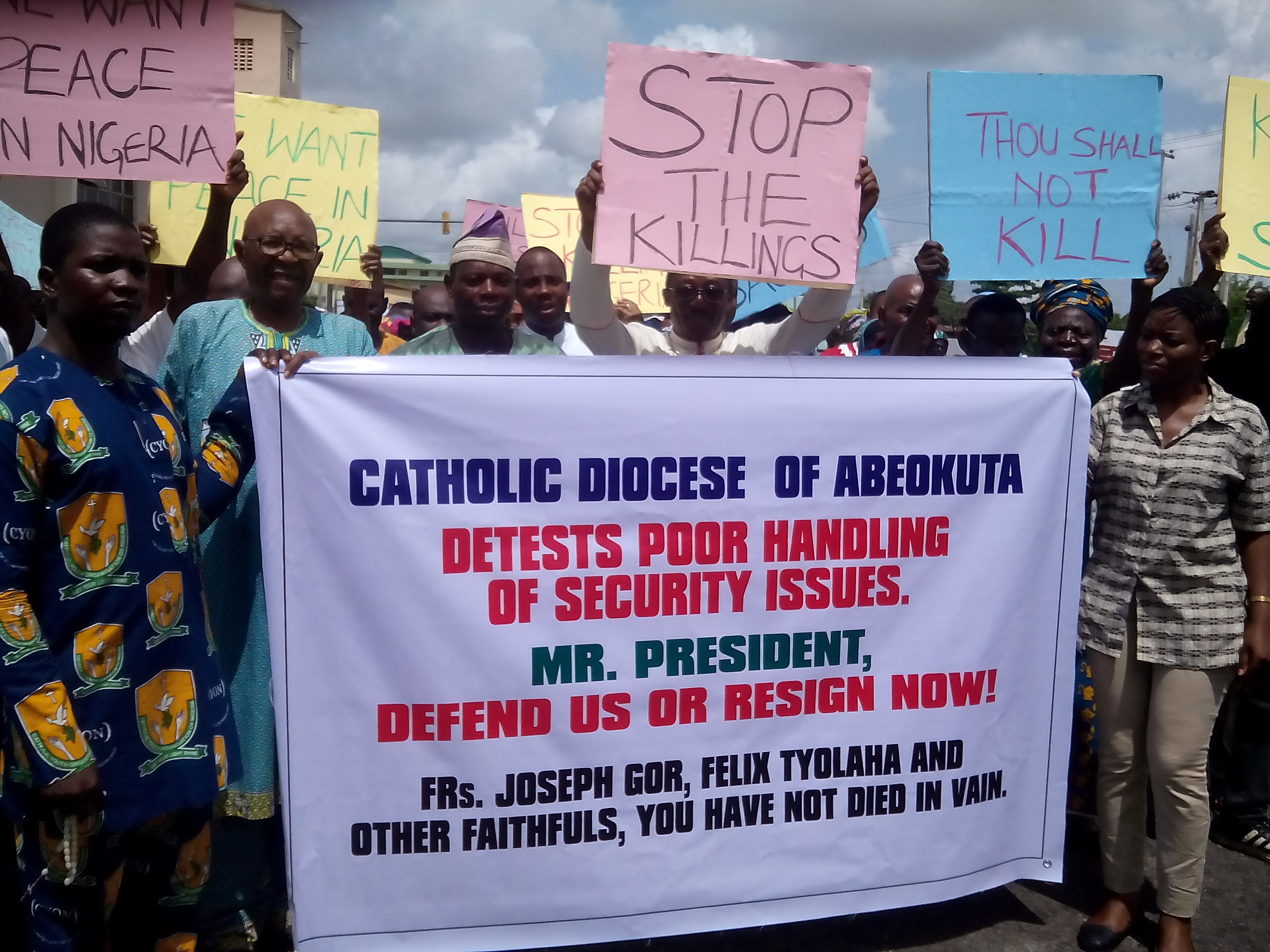 The Catholic Dioceses of Abeokuta and Ibadan located in Ogun and Oyo states respectively on Tuesday embarked on a protest over the killings by suspected herdsmen across the nation.

In Kaduna, hundreds of Catholic clergymen and Christians joined the nationwide protest, which also held in Abuja on Tuesday. Similar protests were held in various parts of Nigeria including Edo and Delta states.

A few weeks ago, two Catholic priests, Joseph Gor and Felix Tyolaha, and 15 parishioners were killed by suspected herdsmen who invaded Mbalom community and attacked St. Ignatius Catholic Church in Benue. They were all buried on Tuesday.

PREMIUM TIMES reports that the protest in Abeokuta, Ogun State was led by Bishop of Catholic Diocese of Abeokuta, Olukayode Odetoyinbo. He asked President Muhammadu Buhari to resign over his inability to curb killings.

“That’s the call of the Bishop. We asked the president to resign because he’s the father of the nation, when the father cannot protect home, what’s the responsibility of a father then? He’s duty is to protect Nigerians, we entrust the lives of Nigeria in him, not only economy, not money but lives. But if a father cannot do that, it is obvious that you are not able to keep the promise as expected.

“We will continue praying as Catholics, we don’t give (up) hope, we know with the help of God and ourselves, there will be peace in Nigeria. We call on the president and everyone to protect lives, respect lives and ward away from any factor or any reasons that can take another person’s life.

The protesters marched along major streets, while they also prayed for the repose of souls of the departed.

Speaking with journalists, Mr Odetoyinbo said that the peaceful protest is to call on the government to respond by saving lives and stopping the killings.

Also, the Catholic Bishop of Ibadan Archdiocese, Oyo State, Oyeleke Abegunrin, who led Christian members to the governor’s office, said the essence of the protest was to register their displeasure over the shedding of blood in different parts of Nigeria.

Mr Abegunrin lamented that, ”no word of sympathy or condolence has been addressed to the Catholic community in Nigeria” by the president for the losses.

“If the president cannot keep our country safe by taking very drastic and urgent steps to reverse this ugly tragedy that threatens the foundation of our collective existence and unity as a nation, it is time for him to choose the path of honour and consider stepping aside to save the nation from total collapse,” he said.

In Kaduna, PREMIUM TIMES observed hundreds of protesters, who dressed in black converged at Our Lady of Fatima Church at Sabon Tasha GRA, Kaduna.

They then marched from Kaduna Refinery and Petrochemical Company (KRPC) junction to parts of the metropolis and back to the church. They also carried various placards with inscriptions condemning the killings and calling on Mr Buhari to act to stem the bloodshed.

In his remarks, Vicar-General, Administration, Kaduna Archdiocese, Bulus Lukar said the recent killings in Nigeria gives cause for concern.

According to him, ”the wave of political assassinations, killings for ritual purposes, frequent gruesome and mass murders of harmless, innocent and defenceless citizens were alarming”.

“Very often, our young people, the very symbols of life and vigour, are the victims and agents of this wastage of human life. In recognition of our divine mandate, we must all be reminded of the sacredness and inviolability of human life.

“No person, authority or institution has the right to terminate human life. All of us, Christians and Muslims must say no to these senseless killings,” he said.

In Uyo, hundreds of Christians also gathered to protest the killings.

The News Agency of Nigeria (NAN) reports that some of the placards carried by the protesters read: “No weapon fashioned against Christians shall prosper;” “Say no to terrorism in places of worship;” “Christians lives matter;” “live and lets live;” “human lives are sacred;” among others.

Bishop of Uyo Diocese, John Ayah, said that Catholics would not take up arms against Fulani herdsmen in the face of recent attacks against worshipers and priests.

Mr Ayah said that they would continue to depend on security agencies of government for the protection of their members, especially during church programmes.

“The killings have become too many. The church is `armless’ so, we will continue to depend on security provided by government.

“If the government provides sufficient security, then there will be no point carrying guns around to protect Christians. We are do not have arms, our arms are our prayers and our rosaries.

“So we are telling governments to wake up to their responsibilities of providing adequate security to the citizens.’’

The bishop said that the killings by herdsmen had become unbearable and had continued to portray lack of adequate security by the Federal Government.

In his remarks, the Vicar General in charge of administration for the Diocese, Donatus Udoette, said that government’s responsibility was to provide adequate security for its citizens.

Mr Udoette said that as Christians, Catholics would not take up arms but would depend on prayers.

He, however, called on the federal government to rise up to the challenge of protecting citizens from the menace of herdsmen.

Beware of fraudster claiming to represent me – Ambode’s wife