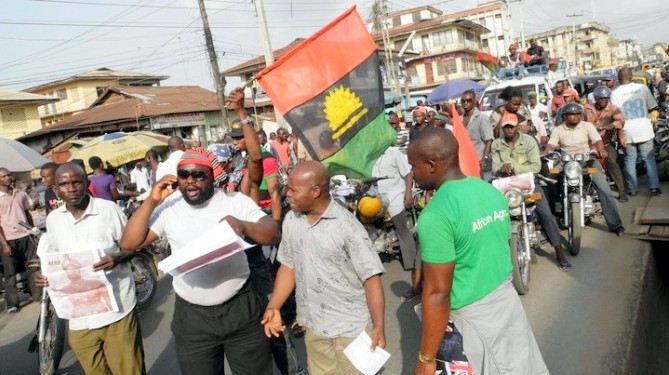 Hundreds of members of the Igbo separatist group, Movement for the Actualisation of the Sovereign States of Biafra (MASSOB), celebrating ‘Biafra Day’ were arrested across the states in the South-east as well as Rivers State by security agencies on Tuesday.

The rally was called by the Ralph Uwazuruike-led faction of MASSOB to celebrate the rededication of Biafra by Mr Uwazuruike in Aba, Abia State on May 22, 2000.

However, a leader of a different MASSOB faction, Uchenna Madu, had disagreed with the Uwazuruike faction on the actual date for the celebration of ‘Biafra Day’.

While Uwazuruike faction chose May 22 for its own celebration, the Madu faction insisted that ‘Biafra Day’ be celebrated on May 30; marking the 51st anniversary of declaration of Biafra by late Odumegwu Ojukwu.

Nevertheless, the Uwazuruike faction pressed on with the celebration as it planned peaceful marches to commemorate the day in the five South-east states which are predominantly Igbo, as well as in Rivers State.

But security agencies in joint operations swooped in on them in the various states, arresting scores of people.

In Imo, at least 50 members of the group were detained at the Imo State police headquarters, Owerri, following their arrest by the authorities, PREMIUM TIMES gathered.

They were arrested along the popular Wetheral road, in Owerri, the state capital as they were coming in from neighbouring Abia State.

They were displaying Biafra insignia and chanting anti-Nigerian songs.

Journalists waited for hours for a scheduled press conference and parade of the arrested separatists.

But the State Commissioner of Police, Dasuki Galadanchi, later announced the postponement of the said event citing the absence of other sister security agencies, who took part in the joint operation as his reason.

In the commercial city of Aba, Abia State, over 50 members of the group were also nabbed by security agencies at Osisioma Ngwa junction along the Enugu-Port Harcourt expressway when police patrol teams fired tear gas at the protesters.

The MASSOB leader for Abia South zone, Fred Onyenaucheya, condemned the arrest of his members.

He said despite the arrests and intimidation, they will not be deterred or cowed.

“MASSOB is a non-violent organisation. We are shocked that police could tear gas and arrest our members who were only celebrating the rededication of the new Biafra. As at now ,over 20 of our members are receiving medical attention for injuries they sustained during the police attack . Even our female members were not spared. We have about 50 MASSOB members arrested by the police.

“This is a grave infringement of our right to freedom of movement. But we assure the Nigerian government that no arrest,detention or any other form of intimidation will stop us from actualising an independent state of Biafra,” he said.

He called on the police to immediately release and apologise to the detained MASSOB members as they did not commit any crime.

In Rivers State, South-south Nigeria, over 10 members of the organisation were arrested by security agents.

This is even as hundreds of members of the group took part in the celebrations in Port Harcourt, the state capital.

The pro-Biafra agitators had commenced the procession at Mile Market in Port Harcourt, and headed towards Eleme junction before they were intercepted around Garrison junction.

The security agents intercepted them and shot tear gas canisters at them in a bid to disperse the crowd. Those arrested were said to be wearing the camouflage of security outfits especially those of the civil defence.

The MASSOB leader in the state, Solomon Chukwu, in his speech during the protest, said: “I am not happy about the development. I met the security people and told them what we are doing, that we are not violent. But, they asked us to close and go. They did not give us chance to go.

“They arrested our people on uniform. Our coming out is not that we took them unawares. They are aware. We are meant to go to Eleme Junction. But, because of their action, we stopped here at Garrison. We will follow up the people they have arrested to secure their release.

“I am calling on the federal government that MASSOB is non-violent and we are a registered organisation. We are shocked that they decided to treat us like this.”

Also, one of the MASSOB members, Anthony Azukem, said the essence of the rally was to reawaken the call for the creation of the Biafran State.

“The rally this morning is to mark our 18 years of existence, after it was formed in year 2000 by Chief Ralph Uwazuruike. The call for the reawakening of the call for the creation of Biafra State is part of the reason for this rally.”

The police in Ebonyi State assisted by other security agencies in the morning forcefully disrupted a protest by MASSOB in Abakaliki, the state capital.

The separatists were on a peaceful march round major streets of the city when they were tear-gassed and some arrested.

The group had earlier announced the protest through the media and social media channels in the country. It said the march is to commemorate the declaration of Biafran Republic by its leader, Ralph Uwazuruike.

But, security agencies in the state accosted them along Nkaliki road as they started the march, sprayed tear gas and arrested some of them, it was gathered.

The police were joined in the operation by the army and the State Security Service, PREMIUM TIMES learnt.

The Commander of Nigerian Millitary Cantonment in Nkwegu, S. O. Sadiq, confirmed the participation of the army in the incident and arrests. He said the arrested persons were handed over to the police.

He stressed that MASSOB did not notify security agencies in the state of the event in writing which necessitated the action to stop the march.

The police spokesperson in the state, Loveth Odah, confirmed the incident to our reporter but could not give the actual number of persons arrested.

“I don’t have the details of the actual number of persons arrested right now,” she said. “When I get the full details I will let you know.”

The police in Enugu said they arrested 15 members of MASSOB who were on a peaceful march in the state.

A statement by the spokesman of the command, Ebere Amaraizu, said they were arrested around Obiagu/Afia Nine axis of Ogui in Enugu State.

The statement quoted the Commissioner of Police, Danmallam Mohammed, as warning against any act by any group capable of disrupting the peace in the state.

According the commissioner of police, anybody or group of persons caught will be made to face the full weight of the law.

Mr Mohammed gave the warning at the police command headquarters Enugu while reacting to the arrests.

He said they were arrested within Enugu metropolis “for disruption of peace”.

He, however, used the opportunity to advise members of the public to be law abiding and go about their normal lawful businesses without fear of intimidation or molestation.

He said the command’s operatives were working in partnership with other security agencies to secure the city.

In Anambra, spokesman of the group, Chris Muocha, said the police attacked them as they were getting set to commence the march in Ontsha. He said five of their members were killed and many others injured.

He said many others were also arrested and whisked away.

But, PREMIUM TIMES could not independently confirm the incident.

The police spokesman in the state, Haruna Mohammed, told PREMIUM TIMES he was not aware of any clash anywhere in the state.

He, however, asked the reporter to give him time to find out if there was any clash with the group promising to get back to the reporter later.

He was yet to do so at press time.

He also did not pick subsequent calls placed to his phone line at the time of filling this report.

MASSOB is advocating for an independent Igbo populated country. It is, however, separate from IPOB, another pro-Biafra group, that has been dubbed a terrorist organisation by the Nigerian government.

Facebook has ‘done a better job’ in recent elections – Zuckerberg