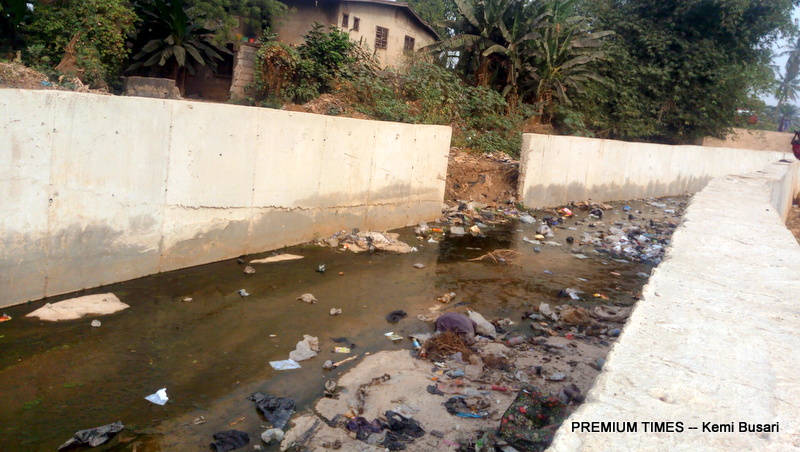 The drainage at Isale Afon is one of the abandoned, poorly executed projects that litter Oyo

In the second part of this investigation, Kemi Busari reveals why residents of different communities in Oyo State continue to suffer despite millions of naira released for essential projects.

Read the first part of the investigation here.

Residents of Oluokun compound, Isale Afon, Ogbomoso, were used to evacuating their homes for days every rainy season. But the 2016 experience was an exception.

The rain started in the night sometime in June. And before dusk, occupants of the house relocated with the intention as usual of returning when the rain subsided.

When the rain finally stopped, the ancestral home of the Oluokun was gone. None of the occupants was around to tell the story when UDEME team visited February 2018.

“It’s usually tough during raining seasons,” Lydia Adeyi, an octogenarian who knew the story but declined to give a full detail said. “Anytime the water becomes full, we pack out and watch till it subsides. That was what happened that day but they never returned. The rain didn’t allow them to return to their house.”

However, had the flood and erosion control project initiated by Mulikat Akande, a former member of the House of Representatives, in 2011 been completed and properly executed, the tragedy would have been averted.

“The drainage is not wide enough and there is no opening at the side to make way for the water we use at home. The water we use in the house stagnates and whenever it rains, the level will rise. The result is that the water cannot go so it makes way easily into our house and displace us,” Mrs Lydia said of her struggle with flood over the years.

When the senator representing Oyo North, Abdulfatai Buhari, told residents of Isale-Afon in 2017 that he had facilitated completion of the project, the dwellers were happy – succour had finally come. But the news did little to residents of Olujide Street, where other houses except that of the Oluokun family still stood.

The drainage, when it was first constructed, stopped at the Isale Afon bridge. Up to this point, the drainage had been ‘just about one metre wide,’ a resident, Ayo Kajogbola, said.

“I am an artisan and I know what they are supposed to do for the amount they quoted. This drainage they did is more like not doing anything. It’s not wide enough. So, when the senator (Abdulfatai Buhari) came to tell us that he will complete it, we were very happy and thought he will help us widen this one before continuing. But he didn’t,” an angry Mr Kajogbola added.

The new drainage is wider, well-constructed and delivered on time according to accounts by residents, but there is more to desire about the project.

The project was quoted as ‘completion of flood and erosion at Isale Afon in Ogbomoso North, Oyo State,’ in the 2016 zonal intervention projects of the National Assembly. About N66 million was earmarked for the completion and it was to be handled by the Lower Niger River Basin Development Agency (LNRBDA).

However, the project was carried out by the office of the Secretary to the Government of the Federation under the ecological fund and not as a zonal intervention project as thought by the dwellers.

The dwellers were furious, at the same time surprised, when this reporter told them that the project was not facilitated by ‘their senator’ as earlier conceived.

Mr Kajogbola would not believe this reporter’s claim because ‘the senator came to tell us it’s his project.’

“He was there when they wanted to start. When it was the time for Mulikat, she came too. So, it’s Buhari that did it,” he said.

Mr Buhari, the senator, admitted that the project is not a constituency project.

“It was the project that was given to me by the SGF, by the President himself, it’s an ecological project. It’s not a constituency project. I only facilitated it,” he told PREMIUM TIMES on phone.

“That is how it has been locked since completion. It was constructed last year. From scratch to completion didn’t take them more than three months and we thought they will be doing things thereafter. But nothing, nothing has happened ever since,” a resident of Eruwa who did not want his name mentioned told the UDEME team.

The project was ‘rushed’ and completed in 2017 but since then, it has not been opened for the use of the dwellers.

UDEME team confirmed the completion of this project but all the facilities were locked.

Our fixer, Yemi Oluremi, a youth, who by the design of the project is supposed to be a beneficiary is unaware of its use.

“How will the water work when they’ve not commissioned it? He questioned. “We don’t know what they want to be doing there. They just built and left it like that,” he said in lamentation of the economic wastage of closing the facility.

The Baale Alanko of Anko Eruwa, Timothy Laoye, a retired Nigerian army major, is the traditional head of the community. He was also unaware of the details of the project.

“As a senator in this constituency, I’m sure he might have made promises in this community. This (project) must have been one of the realisation of his promises. To the best of my knowledge, that place has not been commissioned. That probably may be the reason why it is under lock.

“To the best of my knowledge, I’ve not sighted Senator Soji Akanbi but I’m aware there is something in the community. If such a thing is to be commissioned, I think I should be made to know about it,” the retired soldier said.

Mr Laoye said he supports the idea of the contract, but frowned at the fact that the facility was locked up after completion.

“Before such thing is built, at least, courtesy demands that this individual should come around and make the community involved,” the community leader told PREMIUM TIMES. “Because in the final analysis, we are at the receiving end. It’s a very good project, but I don’t think it is properly handled. You built something like that and you locked it up. Of what use? Of what benefit?

“I regard that as an elephant project. Why is it under lock and key? Let them get the place equipped, come and commission it and allow people enjoy the facility.”

Mr Akanbi did not answer repeated calls and text messages sent to him on why the facility is locked.

Funded at N12 million, a block of three classrooms built for Nawar-ud-deen Secondary School Saki, was just what the school needed at a time it was almost stripped of accreditation by the West African Examination Council (WAEC).

The project handled by the Nigerian Directorate of Employment was facilitated by Olajide Olatubosun, the member of the House of Representatives for ATISBO/Saki East/Saki West federal constituency.

It comprises new block of three classrooms, and a ‘VIP toilet.’  But what the UDEME team met on ground fell far short of a toilet, talk less of a VIP kind.

In lieu of a VIP toilet, the contractor built two pit latrines at the school.

Muibat Olayiwola, the Vice Principal (Admin), was, however, full of praises for the contractor for prompt completion of the project.

“They spent a lot of money. They used German floor for the building. We used to have overpopulation before they built it. Our hall was not adequate. Even when WAEC officials came, they told us to join two classrooms to form a hall because we had 92 students who registered to write the exam. They told us they cannot accept that hall. They came to build it and it didn’t take them time to build. We are very grateful,” she said.

She wants the government to also help the school in other infrastructural deficits.

“We like the government to help us with this pond, our poultry and the pen. Many of our students are doing Animal Husbandry and they need this for practical. We have the mind to do all these things but we don’t have adequate funding. We also need furniture.”

The construction of earth dam in Fiditi, Afijio Local Government Area, could at best be described as controversial. About N10 million was budgeted for the project in the 2016 budget, but the history of the projects dates back to 2011.

The UDEME team met Ajileye Olubunmi, the site engineer, at work on a visit in February 2018.

“We started in 2011. It’s a small earth dam for the community. We were supposed to finish the project within nine months but due to federal government allocation, money was not released. Every year, we monitor. The job we are doing now is because we got little money from the 2016 budget.”

Mr Olubunmi explained what the latest N10 million release would do on site.

“We are doing the main structure of the dam and the spill way. Millions of naira have been sunk to this project but you can’t see it because it is earth work. This embankment is going to reach about seven metres. We are about three metres now.

“With the fund available now, we should be able to do the concrete structure on the spill way. When the water is trapped, you can use it for irrigation, you can treat it for drinking too.”

However, the project could be regarded as a white elephant project because even if it were completed, it would hardly meet the needs of the community.

An earth dam is a hydraulic structure built across a river to create a reservoir on its upstream side for impounding water for various purposes.

In the case of Fiditi, the purposes could either be for irrigation for farmers or water supply for inhabitants. But the mandate does not go beyond dredging and trapping the water.

There is no plan for irrigation or water treatment, thereby rendering the embankment almost useless to the community.

“A water project would have served the community better,” says Victor Oyelayo, a former councillor in the community.

“There is serious water problem in the town. We have some boreholes and deep wells but it hardly goes round, especially in dry season. Inhabitants go through a lot of hardship getting water for drinking.

“This is supposed to be our source of water supply and it has not even taken off. This is like the third time they will moblise to site. They will just come, do some skeletal works and leave. The community does not know the contractor and the contractor did not bother to know the community leaders.”

“All we want is that a project has been allocated to us and since money has been released, the project should be completed on time so that it will benefit the community.”

UDEME is a social accountability platform that tracks the implementation of developmental projects and how funds released for such projects are spent. Coordinators of the platform can be reached on Twitter via @UdemeNG.