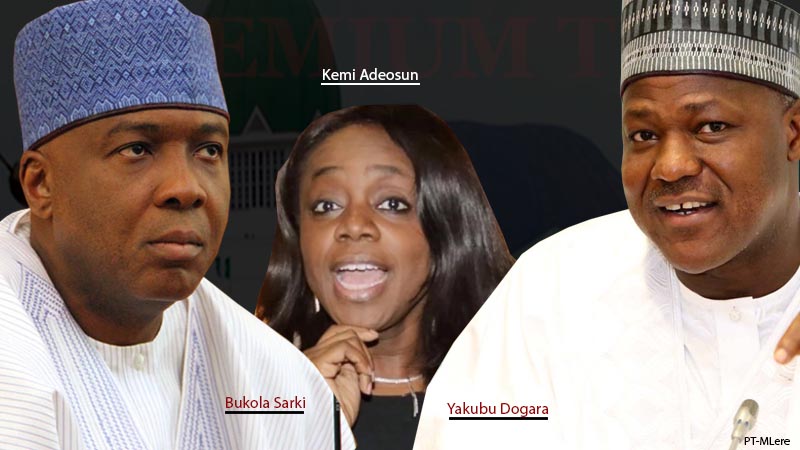 On Friday, PREMIUM TIMES and UDEME exposed how the Minister of Finance, Kemi Adeosun, and the Accountant General of the Federation, Ahmed Idris, colluded to illegally funnel N10billion from the national treasury to our ever non transparent National Assembly.

After the story ran, both officials scrambled denials framed in manners meant to deceive and confuse Nigerians about the real issues raised in the report.

So the issues are clear and easy to digest, we have raised the questions below for the officials. We hope they will find time to answer them as a way of enlightening our readers on this matter.

1) Are you not aware that the National Assembly has its own N125billion budget which should fund its capital and recurrent expenditures, and from which it should settle all its liabilities? Given that this budget is always 100 per cent funded, being a statutory transfer from the treasury, why did you proceed to provide an extra illegal N10 billion to that arm of government?

2) You claimed the money was sourced from a certain N20 billion earmarked for payment of debts to local contractors. Why are you the one paying National Assembly contractors when that arm of government has a block budget to cater for its expenditures and liabilities? And why will you give 50 per cent of funds meant for all owed federal contractors to the National Assembly alone when those who built roads, schools, hospitals and supplied drugs to our clinics are yet to be paid?

3) At a time that federal contractors have abandoned road projects across the country due to non payment of their bills, making our roads death traps, why did you release N10 billion to the National Assembly to buy exotic cars, especially when your boss, President Muhammadu Buhari, has ruled that acquisition of cars by lawmakers is a violation of the government’s monetisation policy and therefore illegal.

4) You released the funds without any due diligence. As chartered accountants certificated in England and here in Nigeria, is it right that you released that huge amount of money to a non transparent entity that the National Assembly is without asking the lawmakers to provide award of contract letters, Certificates of No Objection issued by the Bureau of Public Procurement and job completion certificates issued by the National Assembly?

5) Are you aware that at least 44 of the 82 contractors the National Assembly claimed it was owing are not registered on the National Database of Contractors, a database of the Bureau of Public Procurement (BPP). That means they are not eligible to be awarded federal contracts. Are you aware that even 17 of the 44 firms were not even registered with the Corporate Affairs Commission (CAC)?

6) Are you aware that by colluding with the National Assembly to pay billions of public funds to unregistered contractors, you have violated our country’s Public Procurement Act, and that you deserve to lose your post and then be put on trial in accordance with the law?

7) Can you tell us why you violated the appropriation law by releasing N485 million for a project our budget provided N450million for? Has it anything to do with the fact that Senate President Bukola Saraki conceived the project and is handpicking contractor for its execution? Is it possible that you prefer to please Mr. Saraki at the expense of the Nigerian people?

8) You claimed you released the funds to the National Assembly after warrants were duly issued and approved by the Cash Plan Committee chaired by the finance minister. Can you please tell us in detail the process of approval of such warrants?

9) Unicef says 10.5million Nigerian children are out of school due to what government blamed on lack of enough funds for the nation’s educational sector. Advocacy group, OneCampaign, also says 2,300 Nigerian children under five die each day of preventable causes, a situation that can be addressed if the federal government provides at least one percent of Consolidated Revenue Fund for basic healthcare. In the face of this heart wrenching challenge, do you sincerely believe that illegally paying for exotic cars for our lawmakers should be your priority at this time?

10) Looking through the above questions, will you still say you did the right thing in the manner scarce public fund was passed to the National Assembly? Can you still confidently say you did no wrong?