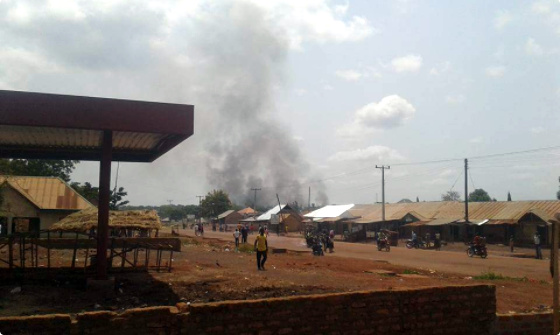 Some persons suspected to be Nigerian soldiers stormed a community in Benue State and set houses ablaze, an official has told PREMIUM TIMES.

They stormed Naka, the seat of Gwer West Local Government Area, at about 11:00 a.m. and began burning houses to the apprehension of residents, Francis Ayagah, chairman of the local government told PREMIUM TIMES by telephone Thursday afternoon.

Details of the incident were still murky as at 2:48 p.m., and Mr Ayagah could not immediately confirm casualty figures, if there were any.

But he said the ‘soldiers’ were on a reprisal attack over the killing of one of their colleagues near the community on Wednesday.

“A soldier was killed by hoodlums yesterday, but I met with the brigade commander around 4:30 a.m. today,” Mr Ayagah said of the possible motive of the arsonists. “He gave me a list of suspects and we arrested five of them overnight. It was while we trying to take them to the brigade that soldiers stormed the town and started burning houses.”

“A whole part of the town has been completely burnt down and we’re appealing for help and understanding from the soldiers,” he added.

The troops were said to have spent over two hours burning down properties in Naka, which is about 45 kilometres from Makurdi, the state capital. Mr Ayagah said homes of citizens were mostly affected rather than those of the suspected killers of the slain soldier.

The Nigerian Army has ended ‘Exercise Ayem Akpatuma‘ in which troops were drafted to combat gunmen who have killed hundreds of villagers in the state since January. Gwer West was attacked a little over a week ago with over 25 people reportedly killed.

The ‘soldiers’ on rampage today are believed to be amongst those embedded with mobile police officers in ‘Operation Zenda’.

Some residents of the community have shared a picture of the arson on social media, although its authenticity has not been independently verified by PREMIUM TIMES.

This is a developing story. This page would be updated as more details are confirmed.