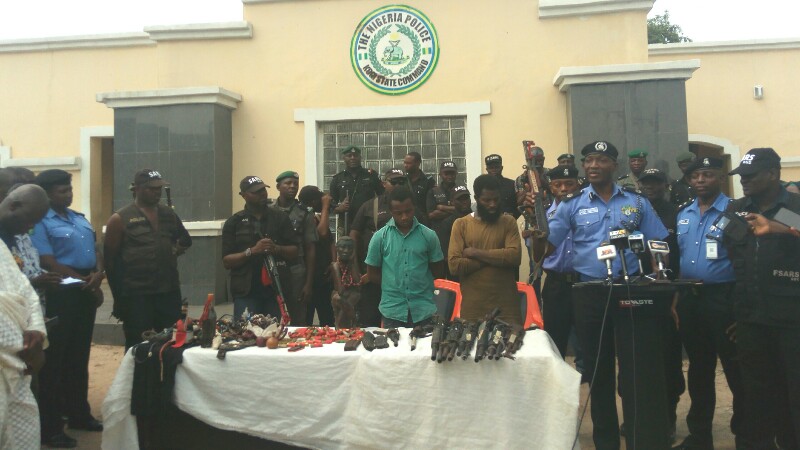 The suspects being paraded by the Nigeria Police

The police have announced the disappearance of some criminal suspects allegedly linked to Dino Melaye, a senator.

The suspects allegedly confessed to being armed and financed by Mr. Melaye last week.

“Four of the suspects were on court remand including two that indicted Senator Dino Melaye and Mohammed Audu,” Kogi police commissioner, Ali Janga, said in the statement Wednesday afternoon.

As a result, the suspects were declared wanted and placed on Interpol watchlist alongside Mr. Melaye and Mr. Audu.

“Consequently, all the six suspects, Senator Dino Melaye and Mohammed Audu were sent for watch listing and red notice by the INTERPOL for immediate arrest any where we see them.

“The Command hereby appealed to the members of the public to assist the Police with useful information on the whereabouts of the suspects by reporting to the nearest police station,” Mr. Janga said.

The suspects were due for arraignment at a court in Lokoja, the state capital, on Wednesday. They allegedly escaped overnight.

The commissioner added that “investigation into the unfortunate incident is ongoing, while the thirteen (13) police officers who were on duty when the incident occurred were defaulted and detained for interrogation.”

Mr. Melaye alleged foul play in the suspect’ disappearance and threatened lawsuit against Inspector-General Ibrahim Idris if the suspects are not immediately returned to custody,

“I will sue the IGP for intimidation, abuse of power, harassment and mental assault if these 2 suspects are not produced dead or alive,” Mr. Melaye said on the floor of the Senate according to a transcript of Wednesday’s proceeding provided on the Senate’s Twitter handle.

The police started investigating Mr. Melaye after an audio recording of a phone conversation allegedly between Messrs Melaye and Audu was leaked on the Internet. A voice that the police said is Mr. Melaye’s could be heard boasting about how a senior Kogi State official was framed-up in the alleged attempt on Mr. Melaye’s life last year.

Mr. Melaye strongly denied the voice is his, saying it was part of an elaborate scheme by Governor Yahaya Bello to implicate him because of their political confrontation. Mr. Bello has maintained he has no hands in Mr. Melaye’s ordeal, saying the senator’s transgressions are catching up with him.