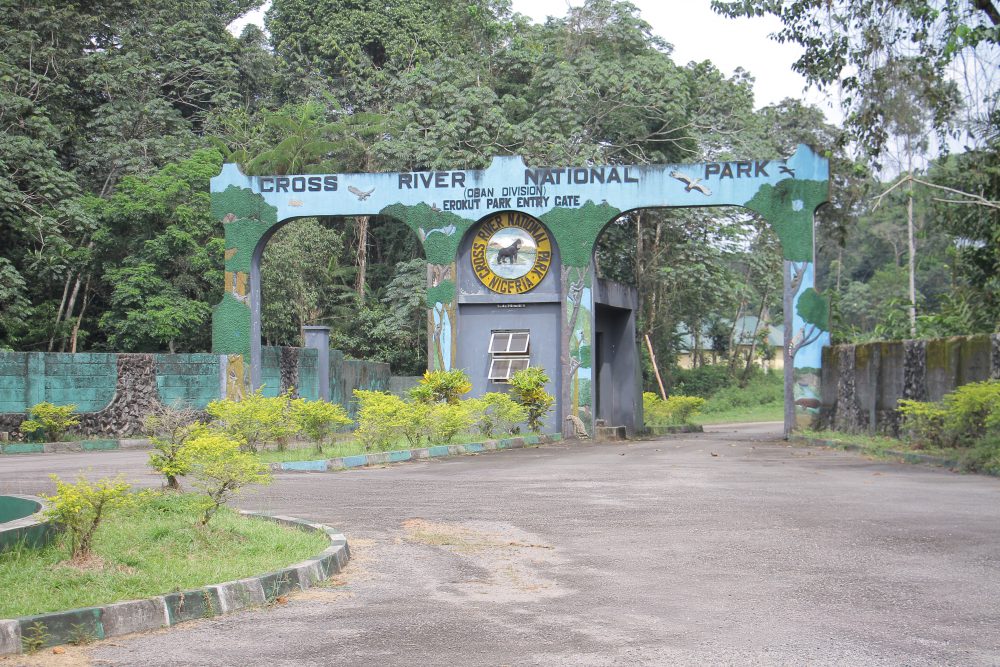 SPECIAL REPORT: Why Nigeria, Cameroon must collaborate on wildlife protection

The proximity of Cameroon’s Korup National Park to Nigeria’s Cross River National Park is one example of how contiguous protected areas facilitate cross-border poaching of wildlife. Conservationists have long discovered that parts of the bush meat sold in South-eastern Nigeria is sourced from Cameroon and now advocate that both countries need to further collaborate to stem the loss of endangered species in their border regions.

Ayamba Ntui hails from a small village called Nsan in Akamkpa Local Government Area of Cross River. Cross River is Nigeria’s South-easternmost state and is home to the Cross River National Park ― the country’s only national park that consists of two discontinuous habitats: the Okwangwo and the Oban Divisions.

The park occupies 4,000 square kilometres, one of the largest in the country. Mr Ntui hunts for a living here, and among his favourite game are porcupines, red deers, monkeys and antelopes. He doesn’t belong to any hunting club or shooting guild, but he contributes, on an irregular basis, to a cooperative society of local hunters in his community. Yet the few hundred naira he contributes is barely enough to support the administrative efforts of his self-help group.

“Sometimes, when we enter the forests and return,” Mr Ntui said, trudging a beaten path in the forest “then we sell the [bush] meat and make some contributions.”

Hunting is an ancient activity with cultural and commercial values in Africa but the creation of national parks to protect the continent’s dwindling wildlife puts the practice in conflict with conservation objectives.

In a country, such as Nigeria, lacking centralised social security, the hunters’ cooperative Mr Ntui belongs to is a kind of informal safety net for life’s emergencies. As a matter of fact, Mr Ntui doesn’t own a mobile telephone, one of the ubiquitous essentials that most middle-class Nigerians take for granted. He simply cannot afford one. Apart from his old rifle, the only protective gear he owns is a green Khaki overall and his resplendent ethnic headwear. Despite the hardship he faces, he is resolute in his decision to fend for his family by hunting in the forests that straddle his ancestral home.

Mr Ntui is certainly not alone. Poor hunters in Cross River State number in their thousands.

But his source of livelihood presents a challenge to the environment ― loss of biodiversity. The Wildlife Conservation Society (WCS) estimates that there are less than a few hundred lions in Nigeria. Yet such dismal figures have not stopped hunters and poachers from killing these endangered animals. In early March, a hunter paraded the carcass of a forest elephant he had killed in the Idanre Forest Reserve, about 600 kilometres west of Cross River in Ondo State. The native hunter, Ojo Adaralode, is reported to have acted to protect the property and farmlands of his community from the incursions of the elephants. Tunde Morakinyo, an environmentalist, defends the hunter in a tweet, stating that hunting is not illegal in forest reserves.

Forest reserves are not wildlife sanctuaries unlike national parks. Hence different conservation regimes are applicable to these protected areas according to Nigerian law.

In a 2009 survey of traded bush meat in eight transboundary areas, the Wildlife Conservation Society (WCS) revealed porcupines as the most commonly sold animal. The research focused mainly on communities bordering the Cross River National Park and Korup National Park. It established that out of 2,961 carcasses found in the markets, 845 (making 28.5 per cent of the total) were of porcupines. Other highly traded species include blue duikers (649), red duikers (394) and monkeys (356). In a more recent report released in 2015, researchers from the University of Uyo found that porcupines, deers and monkeys are still three of the top four species hunted in the Oban Division of the Cross River National Park.

The WCS report also revealed the total value of porcupine carcass to be N2.4 million over the 48-day period of the survey. Adjusting for inflation, that value would be N5.6 million ($15, 430) today.

Andrew Dunn, country director for WCS Nigeria and co-author of the 2009 survey, has worked in Nigeria for a decade. He says the price of bush meat is higher in Nigeria. Most of it is transported across the border from neighbouring Cameroon.

“There is a large bush meat market in Aningege [in Cross River State],” Mr. Dunn said, “and another one in Benue State.” His conservation work has earned him undue scrutiny by the government of Cross River for an entirely different environmental issue ― the proposed trans-Cross River superhighway. He has been vocal about the construction of the super highway that cuts through the national park and other protected areas. He has often argued that the infrastructural development is harmful to the flora and fauna in the park. This position remains unpopular with the Cross River State government, so, he’s rather wary to give details on the bush meat subject.

It is very hard to ascertain the exact figures in cash value or dry weight of wildlife that is being traded between the two countries. Lack of reliable data is one reason, but the porous borders remain the greatest challenge. Yet the latter factor is a more complex problem with political origins that dates back to the early 20th century. First, the territory occupied by the Korup National Park was once administered as a British Mandate. Following the 1919 Treaty of Versailles, which stripped Germany of its colonial possessions in Africa, the colony of Kamerun was divided between British and French authorities.

The French Mandate was etiologically referred to as ‘Cameroun’, and it was the larger of the two colonial divisions. A game of thrones soon ensued.

The British Mandate comprised two non-contiguous territories, northern and southern Cameroons. Nonetheless, both Cameroonian territories were governed from Nigeria where the British had already carved a big country out of a colony and two protectorates in 1914. By 1946, both Cameroonian jurisdictions ― northern and southern ― were being administered as UN Trust Territories and would remain so for the next 15 years. In a United Nations-backed plebiscite in 1961, the people of northern Cameroon voted for a union with Nigeria, while their southern compatriots opted to be absorbed into the French Mandate of Cameroun.

In a span of 100 years, the area occupied by the Korup National Park (established in 1986) has gone from being a German territory to a British Mandate to a Cameroonian province.

Such historical geopolitical tussles have undoubtedly left their marks on the landscapes. Fragmentation of forests have significantly reduced the geographical range of primates in the region, notably the Cross River gorilla. This is the direct result of having the Nigeria-Cameroon borders fall under different governance regimes, even though they belong to the same biome. Mr Dunn wants greater collaboration between Nigeria and Cameroon. Beyond the occasional joint patrols and sharing of information between the authorities of the two national parks, he is calling for a ‘trans-boundary’ approach to the issue.

Israel Mboto, a park ranger, has seen several good public initiatives for communities living near protected areas become redundant. The officer who started working in the Cross River National Park in 1999 has witnessed government-sponsored agroforestry programmes being abandoned. The neglect is attributed mainly to poor monitoring and evaluation by the authorities and a carefree attitude on the part of the beneficiaries.

“In our agenda to reduce poaching, the National Park Service went into livelihood improvement schemes for hunters,” he recalled.

“The government stocked farms [with seedlings] but in the long run the programme was not successful.”

In some instances, notes Mr Mboto, loans that had been granted by microfinance institutions to local communities cannot be accounted for. As the challenges increased, Cross River National Park adopted a radical strategy in the hope of reducing cases of poaching. Nowadays, the park recruits poachers especially those who are physically fit and trains them as rangers just to discourage hunting as an occupation. Rangers argue that this measure has helped in curbing poaching within the boundaries of the protected area. Yet cultural preferences for bush meat also play a big role in these areas.

Carrie Vath, an American researcher (formerly of the University of Florida) who carried out part of her doctoral dissertation in Cross River, says the biggest threat to wildlife is a combination of increasing human populations and the gradual conversion of forests to farmlands. “The answers to these difficult questions are not known and simply outlawing the bushmeat trade is not a viable option,” she said. “People need to eat meat [as a source of protein] and we just need to determine how it can be harvested in a sustainable way so that future generations can enjoy the taste of wild game.”

Both Messrs Mboto and Vath agree that porcupines are the favourite of consumers in the region, but Mr Dunn said, “I have heard that the pangolin meat is the sweetest.” A Nigerian cargo of pangolin scales was recently seized in China.

Mr Ntui. the hunter from Nsan, says if he gets government subvention to go back into farming he would stop hunting.

Some of us hunt because we are jobless,” he said.

Disclaimer: Although support for the investigation came from the African Academy of Sciences, the funders had no editorial oversight whatsoever in the course of the reportage