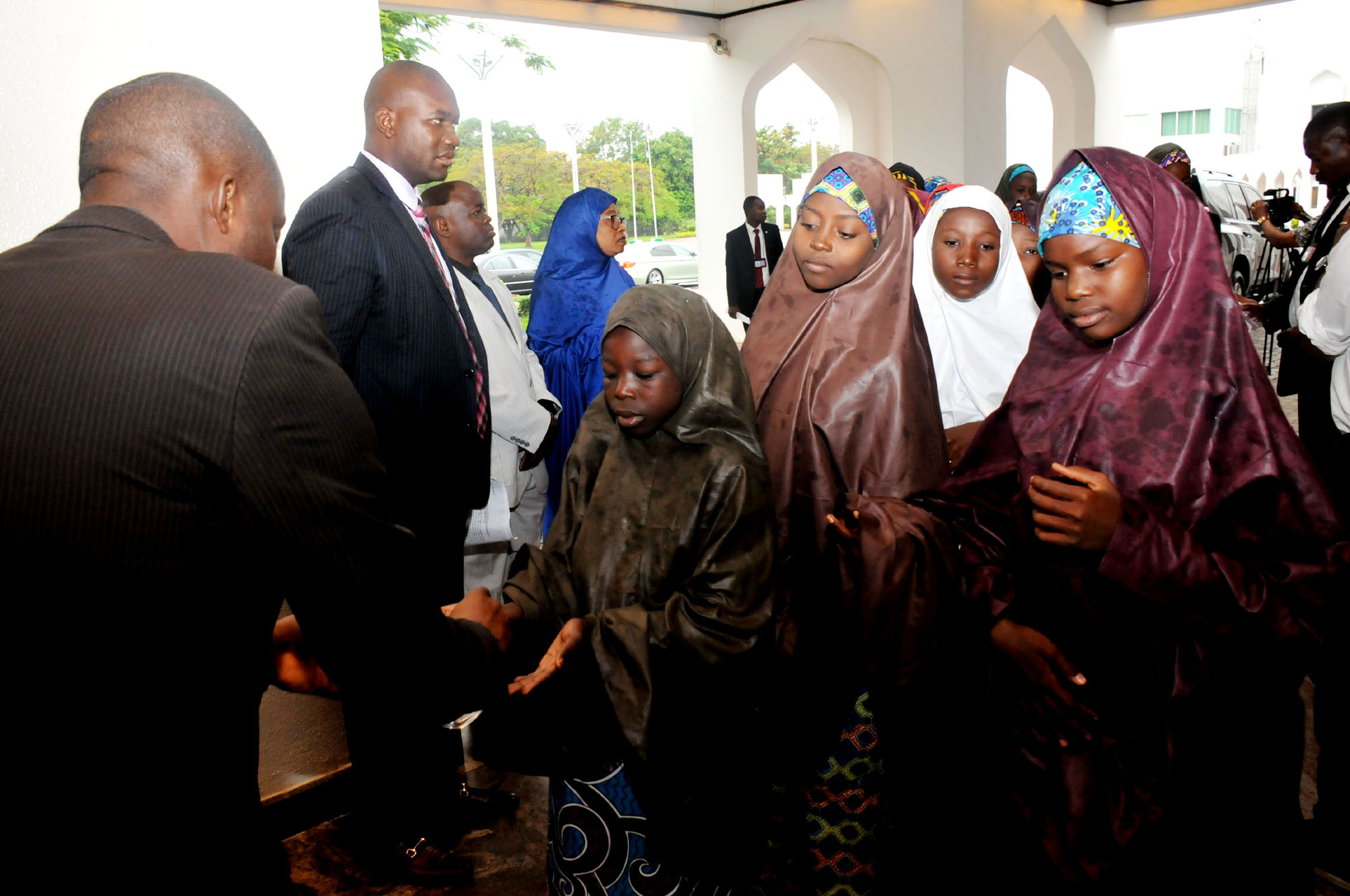 Pic 5. Security Officials screening some of the released Dapchi School Girls believed to have been adopted by Boko Haram Terrorists during their arrival at the Presidential Villa to meet with President Muhammadu Buhari in Abuja on Friday (23/3/18) 01702/23/3/2018/Callistus Ewelike/NAN

How we negotiated release of #Dapchigirls — SSS

The Director General of the State Security Service (SSS), Lawal Daura, has given insight into how the Service negotiated the release of 105 Dapchi school girls.

Speaking on Friday when President Muhammadu Buhari received the schoolgirls at the State House presidential villa Abuja, Mr. Daura recalled that the president had given “a clear directive to security agencies to use peaceful options to ensure the timely and safe release of the girls”.

He said what followed that directive was “intense behind-the-scene dialogue spearheaded by the Department of State Services”.

Mr. Daura said the insurgents’ only condition was their demands for cessation of hostilities and temporary ceasefire to enable them return the girls at the point they picked them.

He said they also required assurances that the government security forces would keep to that request.

“The exercise was arduous and quite challenging. The sensitivity of the operation and some uncertainties surrounding it, particularly routes to be used, nature of transportation, realization and concern that the girls were not kept at one place, issues of encountering military checkpoints within the theater and indeed keeping the operation on strictly the principle of need-to-know made the whole exercise more complicating,” he said.

The SSS chief said beyond the release of the abducted girls, the primary interest of the service for engaging in the dialogue was informed by the need for permanent, possible cessation of hostilities.

Other interests, he said, include discussing the fate of the arrested insurgents and innocent Nigerian citizens being held hostage and the possibility of granting amnesty to repentant insurgents.

He said these factors “presently seem problematic because the insurgents are factionalized while holding various spheres of influence in their guerrilla controlled enclaves”.

Mr. Daura said the “negative impact of social media on otherwise classified operations, and of course, some of the utterances of the government functionaries who were not competent to comment on the issues, posed challenges that almost marred the rescue efforts”.

State of the girls and medical care

The SSS DG said on their release, the girls were taken into the SSS medical facility where they were put through programmes to give them mental stability.

“As such, they are given psychological mental evaluation conducted by trained specialists. About four (4) were discovered to have broken limbs and were sent for X-Ray.

“Almost all of them had one skin infection or the other having not taken bath for over a month. They have been medically examined, and those with ailments were treated. The measures are to ensure that they are in good health,” he said.

He also said all the girls, including four representatives of their school, the principal and vice, their parents were brought into the medical facility as part of measures to relieve tension and anxiety.

He said the presence of these representatives have further reassured and stabilised the girls.

in view of the nation’s experience through these years of insurgency, he suggested that efforts must be sustained towards ensuring the release of all abducted persons in the North East Theatre of Operation.

He also advocated improvement in the strategic plan for the safety of schools in vulnerable locations, using all available national assets.

Mr. Daura said the government should also improve on the coordination efforts amongst security agencies to avoid future incidents.

He also said there was need to expand the current dialogue towards conflict mitigation and resolution, with a view to getting an everlasting peace for the entire sub-region.

Mr. Daura said six more Dapchi girls “are yet to be accounted for, and dialogue on these students is still on-going”.

How to watch Nigeria, Poland friendly