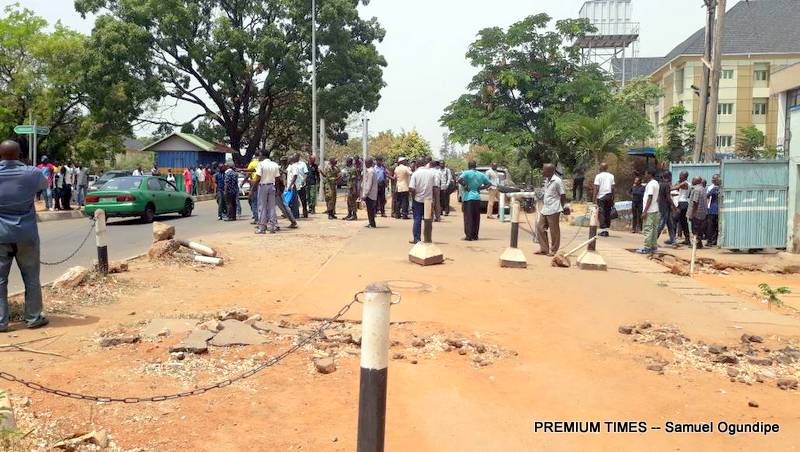 The scene of the clash between the Nigeria Police, Soldiers and the Road Safety Officers

A major fracas broke out amongst Nigerian law enforcement agencies in Abuja on Wednesday, after an attempt to seal a Road Safety office went awry.

PREMIUM TIMES learnt that the violence broke out after soldiers and policemen attached to The Abuja Environmental Protection Board (AEPB) tried to serve the Road Safety office in Wuze Zone 7 a violation notice.

The police officers and soldiers attached to the AEBP officials allegedly assaulted a female Road Safety marshal in the process, leading to confrontation.

During the fight, a soldier was reportedly wounded and a civilian staff of the AEPB was “taken hostage” by the Road Safety marshals.

In turn, soldiers and police officers who were part of the AEPB team seized a Road Safety officer.

A female legal officer at AEPB, Esther Isaac, who led the team to enforce the court order against FRSC, sustained injuries from what appeared to be an impact of broken windscreen on her body, PREMIUM TIMES learnt.

The disagreement resulted in a temporary stalemate over the release of the “hostages”, as neither party was initially willing to free the persons in their respective custody first.

The Road Safety demanded that its personnel must be released first while soldiers stood their grounds that Road Safety should first release the seized civilian AEPB staff, whom they escorted to serve the notice.

The matter was later resolved around 12:00 noon.

The police and Nigerian Army declined comments about the violence, telling PREMIUM TIMES that the AEPB was the appropriate agency to direct enquiries to.

A chain of events

PREMIUM TIMES findings revealed that the crisis has been brewing since mid-February when environmental experts inspected the FRSC Sector Command Headquarters in Wuse Zone 7, adjacent NAFDAC Headquarters, and discovered that the facility did not conform with extant environmental regulations.

Subsequently, the FRSC was informed of its violations through a notice of abatement served on it on February 16. The FRSC acknowledged receipt of the abatement notice on the same day.

After the FRSC allegedly failed to comply with the demands of AEPB, the environmental protection office sued for the enforcement of the abatement notice.

The suit was filed at the Chief Magistrate’s Court, Wuse Zone 2, before Ibrahim Jobbo, a magistrate.

Specifically, the FRSC was accused of discharging sewage into an open space, offensive odour, dumping refuse on the ground, burning of waste, blockage of drainage, failure to fumigate, amongst other gruesome violations of environmental regulations.

On February 26, Mr. Jobbo ordered that the FRSC office be temporarily shut with immediate effect, saying the agency had failed to appear before the court despite several summons, PREMIUM TIMES learnt after reviewing court filings.

“It was the court order that we came to enforce today when they attacked us,” Ms. Isaac told PREMIUM TIMES during an interview at the AEPB headquarters along Independence Avenue.

Ms. Isaac said she arrived at the FRSC office with her colleagues and a police officer around 10:00 a.m. Wednesday. After identifying themselves appropriately and informing the FRSC officers on duty of their mission, they were told to go ahead and carry out their enforcement.

She said that the two vehicles being driven in were those of senior FRSC officers, but when she moved to tell them that they were about to seal the premises, she was met with violence.

“One of the officers that I could only remember her name as ‘Martha’ started slapping me saying I pushed their boss,” she said. “Then other Road Safety officers joined in and they started pummeling me from all sides.”

During the violence, she admitted hitting a female officer with one of the heavy-duty chains she was holding, but emphasised it was “not intentional.”

Some of Ms. Isaac’s colleagues called in a reinforcement from the police and the Nigerian Army, and the violence intensified as soon as the team arrived.

Ms. Isaac said she may pursue assault charges against FRSC.

‘You can’t seal a government office’

The FRSC told PREMIUM TIMES it had a court case with the AEPB bordering on violations of environmental regulations, but said its premises should not have been sealed.

“What happened was that they actually came that they wanted to seal the place up because we didn’t appear in one summon,” Bisi Kazeem, a spokesperson for the FRSC, told PREMIUM TIMES Wednesday afternoon. “But our lawyer was there to tell us we could go another time because we didn’t get a summon on time.”

Mr. Kazeem said sealing a building that is being occupied by a government agency could be problematic.

“Trying to forcefully seal off an office of government, there was a sort of resistance,” he said, but added that the matter is “being resolved.”

Mr. Kazeem said all allegations of brutality on all sides would be investigated.

The AEPB, however, disagreed with the Road Safety spokesperson, saying no federal agency is above the law.

“Environmental protection is a serious task that we should ordinarily expect government agencies to comply with all regulations,” said Muktar Ibrahim, a spokesperson for the AEPB, in an interview with PREMIUM TIMES Wednesday afternoon. “It is when government agencies comply with rules and regulations that we could expect ordinary citizens to comply.”

Mr. Ibrahim said AEPB officials are likely to return to the FRSC office to enforce the court ordeal by sealing the building, but insist that the mission was not to seal the building for too long, but only to enforce environmental laws.

“The AEPB and the FRSC are not in any form of competition with each other, so there’s no point sealing the premises perpetually,” he said.

“The only thing we want from them is compliance, and once that is done, we would have no issues.”

“We’re supposed to complement the efforts of each other for the overall benefit of the society, and obeying the law is a key part of that,” he said.

Mr. Ibrahim said AEPB personnel regularly face violent confrontation in the course of enforcing environmental laws, appealing to all residents around the capital city to desist from flouting environmental regulations in order to forestall further aggression against its personnel.

I plan to retire as a farmer – Actor Victor Osuagwu