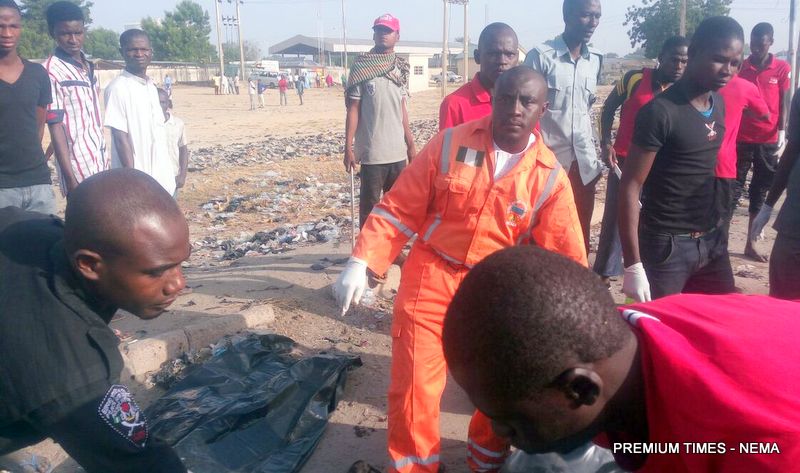 File photo of a bomb explosion scene in Maiduguri

A lone suicide bomber riding a bicycle with explosive devices strapped around his body detonated himself at a crowded suburb of Maiduguri, Borno State, killing three persons on Monday night.

At least 17 other people were also injured by the massive explosion.

The police said the three dead victims were operatives of the Civilian-JTF that were out on night duty.

The thunderous explosion echoed over Maiduguri on Monday night at about 8 p.m. The media could not immediately figure out from which direction the sound was coming until Tuesday morning.

“A male suicide bomber riding on a bicycle detonated IED strapped to his body at Muna Datti area, killing himself and three Civilian JTF members,” said Mr. Kwaji, a deputy superintendent of police.

“Seventeen other people were injured.

“The scene was immediately visited by Explosives Ordnance Department (EOD) and patrol teams.

“The dead and injured were evacuated to University of Maiduguri Teaching Hospital (UMTH).

“Normalcy has since been restored in the general area,” he said.

Muna Garriage is one of the suburbs of Maiduguri that has been plagued by suicide bombing since 2016. More than 30 cases of suicide attacks have been recorded in the area with a total casualty figure of about a hundred persons either killed or injured.

UCL Preview | Neymar-less PSG have to save Emery