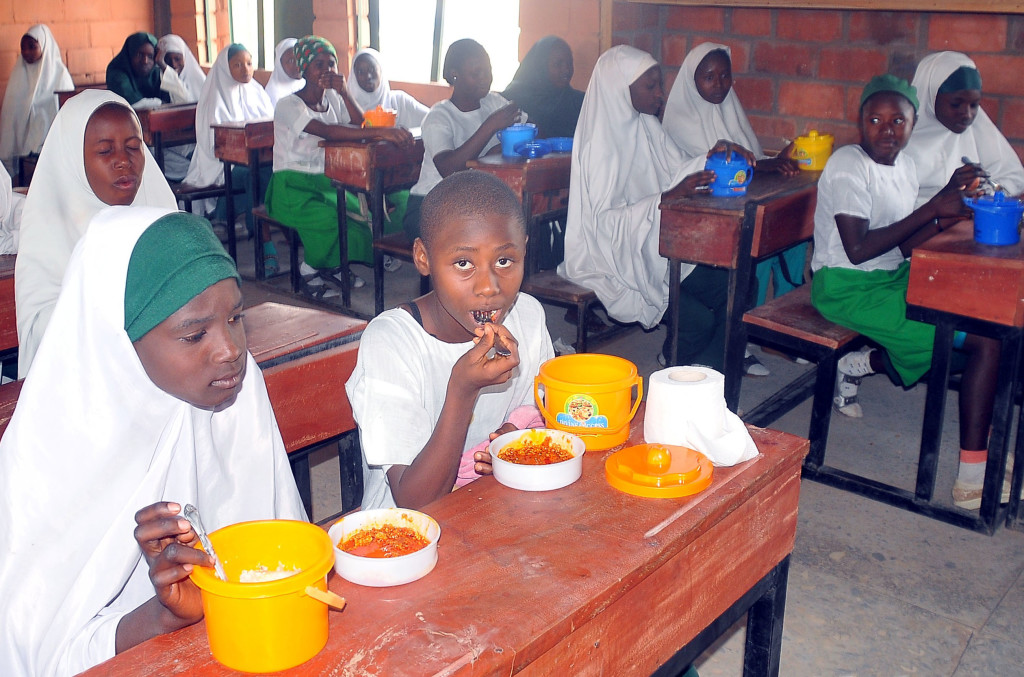 A file photo of the school feeding programme

No fewer than 10.27 million children have been enrolled in public primary schools in the North West and North Central Zones of the country in the last one year, a survey by the News Agency of Nigeria reveals.

Findings in the two zones indicate sharp increase of up to 20 per cent in some states in the school enrolment figure, with the number of girls enrolled at 4,582,706.

The figure does not, however, include that of Kebbi, Jigawa and Benue States.

Stakeholders attributed the increase in enrolment in the last one year to efforts by the federal and state governments to ensure that no child of school age was left without education.

Among measures taken to attract children to schools are the Federal Government Home-Grown School Feeding Programme, free tuition and the provision of infrastructure and other facilities to ease teaching and learning.

Consequently, more children have been attracted to schools and retained in the classes, with steady rise in the number of girls entering the schools.

Ms. Umar attributed the increase in pupils’ enrolment especially in rural areas to the introduction of free feeding programme of the state government.

“We disbursed about N1.8 billion scholarship to the pupils through their parents. This has encouraged many parents to send their girl-child to school.’’

The director explained that 40,053 teachers have been deployed to primary schools across the state, out of which 31,690 are female teachers.

Meanwhile, Sani Tanko, Director of Publicity, Kano State Community Re-orientation Committee, said the introduction of the free feeding programme of the federal government in the state at the end of the first term school session had added impetus to pupils’ attendance.

“Since the commencement of the free feeding, parents have enrolled their children more in the schools, because of the free food being given to the children.

In Katsina State, Ishaq Bello, the Secretary of SUBEB, said 1,714,757 pupils have been enrolled into primary schools across the state in 2017.

“The number of pupils enrolled in public pre-primary and primary schools included 930,410 males and 784,347 females,’’ he said.

Bello disclosed that the state government had employed 21,870 teachers out of which 16,627 were male and 5,249 were female teachers.

According to him, the board has 2,458 public primary schools across the 34 local government areas of the state.

The secretary revealed that the implementation of the home grown school feeding programme has not started yet, but that “the state government has provided enough teaching and learning materials in all primary schools.

Lawal Abubakar, Permanent Secretary, Zamfara Ministry of Education, said enrolment of pupils have been on the increase in the state.

Abubakar said that the ministry conduct an Annual School Censors (ASC) at the end of each academic year to assist in planning for the next Enrolment Drive Campaign (EDC).

The permanent secretary said that the increase was as a result of the school feeding programme introduced by the federal government in 2017.

“The school feeding programme has helped many parents by solving the problem of breakfast and lunch in many homes, as they now encourage their children to go to school, and remind them of the food they will be given,” he said.

Ibrahim Mailalle, Director Planning, Research and Statistics in the Ministry, said that during their visitation to schools, they discovered that pupils performance had improved as they participate well in all school programmes.

On problems encountered in the implementation, Mr. Mailalle said payment to food vendors was not regular.

“We asked the people in charge of the vendors, National Home Grown School Feeding Programme, and they explained that it was due to administrative problems.

“So if a vendor is not paid, other vendors will supply their own food to the children, but the food will be reduced in quantity as they will have to share it among all the pupils,” he said.

Bilyaminu Ahmad, a school teacher, told NAN that some of the pupils now sit on the floor because of the high number in class.

Mr. Ahmad said that the pupils were more active and eager to attend school, adding that most of them were now good in Mathematics, and have showed interest in other subjects.

Jabbi Kilgori, Sokoto State Commissioner for Basic and Secondary Education, told NAN that 15, 000 teachers are taking charge of the 750, 000 pupils in 2,011 primary schools across the state.

He explained that 60 per cent of the primary pupils were boys while girls constituted 40 per cent, adding that the figure covered Early Child Care, nomadic and physically challenged children schools.

According to the commissioner, the state has from 2015 recorded 27 per cent increase in primary school enrolment.

Mr. Kilgore said the introduction Conditional Cash Transfer scheme which targeted the poor, has helped in raising the enrolment figure.

He disclosed that teachers in the state without the required teaching qualification were being supported to obtain National Certificate of Education, NCE.

According to him, arrangements have been made to retrain the teachers at relevant state-owned tertiary institutions, and at the Usmanu Danfodio University.

The commissioner disclosed that a pilot free feeding programme in six primary schools in Wamakko Local Government introduced three years ago was a huge success as enrolment in the schools had tripled.

He announced that arrangements are being concluded to commence the feeding of 500, 000 pupils in March 2018 under the federal government free feeding programme.

“Already, 5,000 cooks and other auxiliary workers have been engaged and have completed all necessary process for the take-off.

“The effort was to improve access and proximity and for parents to have more confidence in sending their children to school.

He added that school shifting arrangements were made to accommodate more pupils.

Mr. Kigori said the state is getting support from UNICEF on capacity building for teachers and integration of Qur’anic schools into modern system of education.

He added that World Bank’s Global Partnership for Education, USAID, Bill and Melinda Foundation, and DFID among others were also supporting educational development in the state including special programmes for the girl-child.

The commissioner particularly said that the DFID is supporting 10,120 girls with N15,000 annually to remain in school.

Mr. Kilgori said the State’s Consultative Committee on the Development of Education headed by the Sultan of Sokoto, Sa’ad Abubakar, has played important role in encouraging communities to support education pf their children.

In Kaduna, the government said 1.81 million pupils were enrolled into public primary school in 2016/2017 session.

According to the state Annual School Census Report 2016/2017 obtained by NAN, girls constitute 875,135 of the enrolment figure, representing 48.19 per cent.

The Executive Chairman, SUBEB, Nasiru Umar, said public primary school enrolment as at January 2016 was 1.5 million and went up to 1.8 million in 2017 after the introduction of school feeding programme.

“However, we are in the process of recruiting 25,000 qualified teachers to replace the sacked ones, and the first batch of 10,000 would be posted to schools by second week of February.

“Although we require a total of 45,000 qualified teachers to adequately provide quality education in our public primary schools, the ongoing recruitment exercise will increase the number to 36,591.

NAN report that the School Feeding Programme in the state ran from January to August 2016, but was suspended due to financial challenges.

“But throughout 2016, the state fed all the primary pupils from primary one to six, at the cost of N10 billion, meaning that the state shouldered the responsibility of the federal government.

“It was agreed that the federal government would refund to the state about seven billion it spent feeding primary one to three. That was why the programme stopped.

“But the federal government has redeemed some percentage of the amount, and so very soon, we will commence the programme, “he added.

NAN learnt that the federal government had in July 2017 began the National Home Grown School Feeding Programme in the state targeting 1,045,212 pupils in 3,752 primary schools.

Mr. Gora told NAN that 11,654 vendors were engaged to supply the food to primary one to three pupils.

However, the feeding programme was not consistent due to irregular payment of many food vendors.

Report from Niger indicated that 659,173 pupils were enrolled into 3,124 primary schools in the state.

Meanwhile, Fatima Madugu, the state Commissioner of Education, said that the implementation of the Home Grown School Feeding Programme began in October 2017.

She however said that the programme was implemented for only two weeks and had to be stopped because of some challenges.

“We had to stop the school feeding programme because of some challenges we encountered after two weeks of its implementation in the state.

“But I am glad to announce that the number of children that are now enrolled in primary schools has increased, and once the school feeding programme continues there will be massive enrolment of children.’’

NAN recalls that the state government had in September 2017, said it would spend N1.2 billion every 20 days on the school feeding programme.

According to Bashir Suleiman, Director of Planning, SUBEB, 305,646 pupils are males while 254,437 are females.

He, however, said that the figures were expected to rise significantly as more pupils had been registered in the 2017/2018 session.

Mr. Suleiman said that 285,000 children of school age were still out of school, adding that they were within the bracket of five and 15.

The Director said that the Federal Government’s School Feeding Programme had boosted pupils’ enrolment in schools, but opined that the scheme would achieve better results if the board was involved in its implementation.

He expressed optimism that the annual enrolment campaign and the World Bank-assisted Better Education Service Delivery for All (BESDA) programme would further attract more children to enrol in school.

In Nasarawa State, the number of pupils enrolled into primary school in the last two years has also risen significantly, with the SUBEB tracing the development to massive infrastructural development in the schools.

According to Musa Danazumi, chairman of the board, many parents withdrew their children from private primary schools to public schools when the infrastructure in the government schools improved.

The chairman also said that the Quranic Schools in Awe, Shabu, Angwan Zaina, Laminga, Nasarawa and Toto currently had 1,200 pupils.

He said that the school feeding programme was yet to take off in the state adding, however, that some schools had been selected for the scheme.

The official said that the board had embarked on massive renovation and construction of new classrooms, toilets, supply of furniture, fencing, among others.

“We have changed the faces of all the schools and it is little wonder that every parent wants to benefit from what we have done,’’ he said.

The figures released to NAN by Mathew Sule, Chairman of SUBEB, showed that 13,713 fresh pupils were registered in 2017.

According to him, Plateau has 2,420 public primary schools, 307 junior secondary schools across its 17 local government areas, with 15,045 teachers manning the classes.

He said that Plateau had implemented the school feeding programme for children in primaries one to three across the state.

On the effect of the school feeding programme on the rise in the number of pupils in the schools, he said that it was too early to correlate them.

“It is a new programme which has many factors; it is still faced with some teething problems. We must give it a little more time,’’ he said. (NAN)

2019: Buhari will not divert capital project funds for election – Adeosun