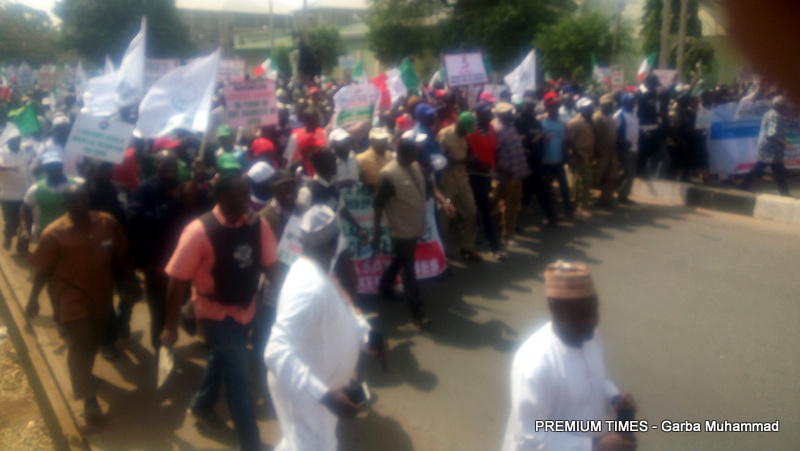 NLC carries on with scheduled protest in Kaduna state despite high presence of security personnels.

The Nigerian Labour Congress on Thursday broke through a police cordon in Kaduna to begin a protest against the sack of teachers considered incompetent by the state government. The teachers were fired after they failed a primary four test administered on them by the state’s education ministry.

Police said they deployed 8,000 officers to stop the demonstration called in defiance of the state government.

Soldiers and armoured vehicles were also deployed to stop the march.

Gov. Nasir El-Rufai warned he would sanction teachers who join the protest.

But the NLC president, Ayuba Wabba, said the union would not be intimidated and that the protest would continue.

By afternoon, thousands of protesters broke through police blockade and marched along Independence Way towards along Muhammad Buhari way.

“Anybody who think we cannot come out for the protest has malaria, and that malaria must be treated today,” Mr. Wabba, said while addressing members inside the Labour House.

The protesters continued as they marched to the Government House to deliver a letter to the governor.

They held banners and placards with different inscriptions.

Three police vans later joined to give security cover along Ali Akilu Road by NNN round about.

Governor El-Rufai has insisted he would carry on with his reform of the education sector despite opposition from labour and other interest groups.

The governor said those opposing the reform had perhaps benefited from the rot of the past.