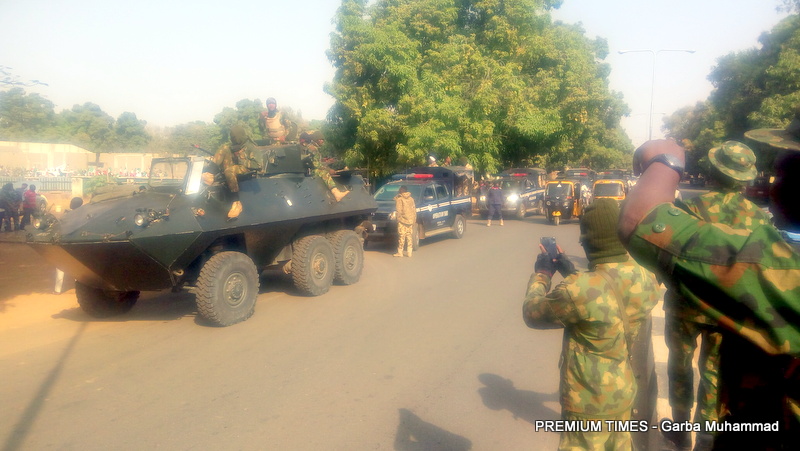 There was a heavy security presence in Kaduna on Thursday morning to foil the protest by the Nigeria Labour Congress, NLC.

The labour union organised the march to protest the sack of thousands of workers by the state government.

The state government and the police had warned against the march.

The workers are being laid off as part of a government reform of its public service to become more efficient and professional, the state government has said.

About 24 police vans, two armoured cars, 10 special motorcycles and hundreds of police officers and soldiers were on the streets on Thursday morning, many stationed about 40 meters from the Labour House gate along Independence Way.

Despite the security presence, labour leaders gathered with flags and placards singing union slogans at the gate of the Labour House, which is the NLC secretariat in the state.

“We are ordered by the CP (commissioner of police) not to allow the protesters to cross Independence Way,” a police officer who took position in front of the Labour gate said.

“We are restricting them to the premises of Labour House,” he added.

“We will push them (security) away and proceed on our protest. They can’t intimidate us.

“So, Nigeria has this military might and the country is still facing security challenges,” one of the workers said.

Mukhtar Aliyu, spokesperson of the police in the state, said they are also embarking on a show of force around major flash points in the metropolis.