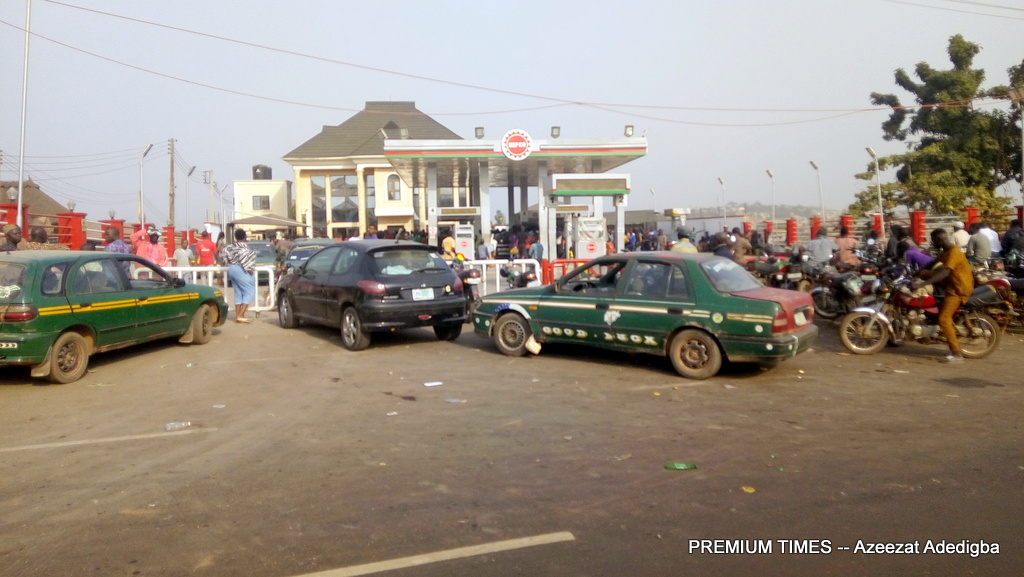 Days after the Group Managing Director of the Nigerian National Petroleum Corporation, NNPC, Maikanti Baru, declared that the corporation had successfully ended the fuel scarcity, latest monitoring reports by PREMIUM TIMES’ correspondents indicate that although queues have reduced in many areas, prices remain above the official N145 per litre.

“I am happy to report that we have tamed the monster that reared its head as a result of the rumoured price increase about three weeks ago,” Mr. Baru, told State House correspondents in Abuja last Friday.

He had blamed “greedy marketers” for the fuel shortage, which marred the last Yuletide celebrations.

In Lagos, it was observed that there was relative calm in the fuel supply situation, with most filling stations, particularly in the mainland area having enough stock of the commodity.

Although long queues of motorists, which was a common feature of most filling stations at the height of the crisis last week, have largely eased, some areas were still experiencing pockets of hitches.

Our correspondent who monitored the situation on Tuesday reported that more filling stations were dispensing, unlike the situation last week where just a few were open for business.

However, in many areas, the price was yet to come down to the government approved retail price of N145 per litre.

In Lekki Peninsula area, most of the stations visited sold petrol for prices between N180 and N200 per litre.

The same was applicable in Badagry area of the state.

On the outskirts of Lagos, in Sango area in Ogun State, there was relative calm although many filling stations sold petrol for between N200 and N250 per litre.

A fuel attendant in one the filling stations in Oju-ore area of the state who spoke with PREMIUM TIMES said there were still a lot of stations that had no stock products.

In Ekiti, Ondo, Osun, Oyo states, normalcy had gradually returned, as queues were gradually reducing to the barest minimum, although petrol was still sold for N200.

In Ibadan city centre, the Oyo State capital for instance, only Bovas Petroleum and Matrix energy were about the only private filling station selling petrol at N145 per litre. This led to long queues at its five stations in the city.

However, other fuel stations were still selling for between N200 and N220 per litre, with scanty or no queues.

In Ekiti, the scarcity of products supply had completely abated, although consumers were still paying the high price of N200 per litre.

The queues in Ado Ekiti had shortened across most filling stations where the product is available for between N190 and N200 per litre.

In Akure, the Ondo State capital, most filling stations selling above the normal pump price had no queues.

However, at Bovas and the NNPC mega station where the fuel price is normal, there were very long queues of motorists outside the filling stations.

In Osogbo, the Osun State capital, relative sanity had been restored, with retail fuel price going for N200 per litre.

In Abuja, the situation appeared to have returned to normal, as most filling stations belonging to the major oil marketing companies, which had stock of the commodity, were selling at the government approved price of N145 per litre.

Although the filling stations belonging to the independent marketers, most located in the outskirts of Abuja Federal Capital Territory, equally have petrol, they were not dispensing at the normal price.

Some of the stations visited by out reporters were selling at between N180 and N200. Yet, there were others that refused to open in the day time, only to open late in the night to be able to sell at higher price.

In these areas, the common feature has been the presence of emergency fuel hawkers (black marketers) on the streets still selling petrol at about N1200 and N1,500 for five-litre containers.

In Uyo, the Akwa Ibom State capital, the situation is yet to return to normal, with petrol still being sold at N210 per litre in most of the filling stations visited on Tuesday.

There were some other stations where the product was sold at a slightly higher rate of N220.

Most of the filling stations belonging to the major fuel marketers were not open by Tuesday.

The NNPC mega filling station near the Itam flyover, where fuel was sold at N143 per litre on Tuesday, had one of the longest queues witnessed in the area in recent times.

Rather than wait for several hours on the queue at the mega station, some motorists opted to patronise the black market right opposite the station, which has become a thriving business since the fuel crisis started.

Some residents of the city told PREMIUM TIMES that there were filling stations on the outskirts of Uyo where fuel was being sold for as high as N250 per litre.

Residents now buy a four-litre gallon of petrol for as high as N2,500, PREMIUM TIMES investigation revealed on Tuesday.

Most filling stations in Maiduguri were still closed, with motorists spending most hours of the day on fuel queues at the NNPC mega station, the only place where fuel is sold at the official pump price of N145 per litre.

The few filling stations being operated by independent marketers only sell their products at about N250 per litre, mostly late in the evenings.

A mechanic in the state capital, Yahaya Garba, told our correspondent that the situation was fast telling on residents and their everyday activities.

“Due to scarcity of petrol, I cannot drive my car to a far distance now”, he lamented.

“In the morning, I was lucky to buy half of a gallon at about N700, just to drive to the workshop. And by this (Tuesday) evening, when I am about to drive home, I will buy two litres at N750 from the same black market.

But, I was just lucky. Many people bought a gallon for N2,500 in some other locations of Maiduguri.”

He said the queue at the NNPC mega station was so long that motorists spent more than 12 hours on New Year day to buy fuel, only to be told hours later that, “fuel had finished.”

In Bauchi and Yobe states, the situation was not better. Residents spent hours on queue at the NNPC mega stations and other major independent marketers’ outlets to get the product at official price.

In Damaturu, Yobe State capital, a gallon of four litres of petrol goes for N1,200.

Apart from the NNPC mega station where fuel was being sold at the official rate of N143 per litre, motorists were making do with the supply from the black marketers, who sell a gallon of petrol for about N1,200.