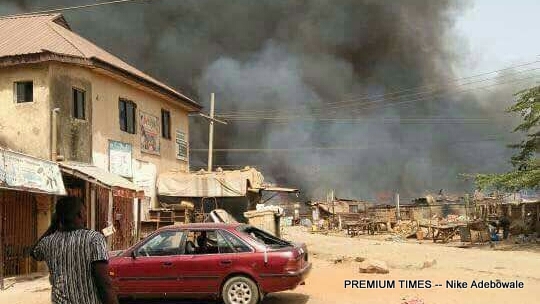 A section of the market on fire

Calm has returned to Bwari, the capital of Bwari Area Council in Abuja, after violence engulfed the area on Christmas day.

The council also hosts the Nigerian Law School and the office of the examination body, JAMB.

The violence, which residents said was an ethnic conflict, led to the burning of the main market in the town.

Armed soldiers and police officers were eventually drafted to maintain peace in the area.

The Abuja police spokesperson, Anjuguri Manzah, told PREMIUM TIMES that the situation has been brought under control.

“Yes it is true that there is crisis in Bwari area, but the authority has deployed our men and they have succeeded in calming the situation.

“If you are in the area, you will see our men working hard and going round to ensure peace is maintained in that area,” he said.

On the cause of the crisis, Mr Manzah said, “I cannot tell you about the cause now. All we are concentrating on now is to ensure peace returns and residents can move freely.”

According to a resident of the area, the fight started late last night after a Hausa man killed a Gbagi man. In a bid for revenge, the Gbagis residing in the area burnt down the Bwari Market on Monday, the resident said, seeking anonymity for fear of attack.

Another witness, who identified herself as Bimbo, said there has been tension between Hausas and Gbagis in the area for a while.

“But the cause of this fight is because a Gbagi man was killed last night. Right now, all the Hausas in this area are running towards Kaduna area because of the fear of getting killed,” she said.

When PREMIUM TIMES visited the area, the streets were deserted with only a few people seen observing the situation from their doorstep. Armed security officials were also seen on the streets.

Also, taxi drivers conveying passengers from Dutse to Bwari could not gain entrance to the town. They dropped their passengers at the closest military check point leaving them with no other choice than to trek almost four kilometres to their destination.

The Chairman of Bwari Area Council, Musa Dikko, could not be reached as at the time of this report.