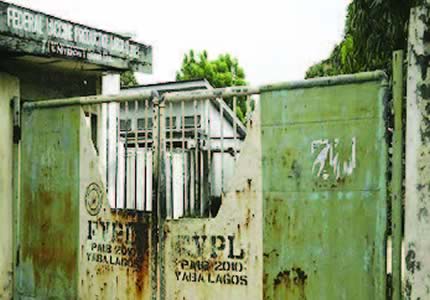 Months after the Federal Government announced plans to restart local vaccine production at the Federal Vaccine Production Laboratory, Yaba, Lagos, nothing significant has changed at the facility, a PREMIUM TIMES investigation has revealed.

The Yaba Vaccine Production Laboratory located at no 1, University Road, Yaba, Lagos is currently under lock and PREMIUM TIMES could not gain access to the compound.

The vaccine production centre was active for about six decades, between 1940 and 1991, producing large quantities of vaccines against smallpox, rabies, yellow fever for not only Nigeria, but neighbouring countries like Cameroon, Central Africa and a few other countries in Africa.

It was closed in 1991 by the federal government which said it wanted to reactivate and upgrade the facility. This is yet to be done until today.

At a press conference in April, the minister of health, Isaac Adewole, said after a Federal Executive Council, FEC, meeting that the government had decided to set up a joint venture company with May and Baker, a pharmaceutical company in Nigeria, to commence local production of vaccine at the Yaba facility.

The minister said the country was set to restart producing local vaccines in collaboration with the pharmaceutical giant.

Mr. Adewole said May and Baker was to assist in the production of local vaccines to improve immunisation routines and reduce dependency on international donors.

According to him, the agreement proposed to create a company called Biovaccines Limited which would be jointly owned by the federal government and May and Baker Plc at 49 and 51 per cent equity participation respectively.

“The centre between 2017 and 2021 will produce many of the basic vaccines that we need. We have considered vaccines as a security issue, it is not only health, but we need to guarantee the security of all Nigerians particularly our children. And so with this agreement, we will be able to produce these common vaccines and from 2021, and beyond other vaccines that are necessary would also be put on board to administer to Nigerians,” the minister said.

GAVI is an international finance mechanism that enables developing countries to procure vaccines at very cheap prices. By 2022, Nigeria will no longer be on the GAVI list as it would have to pay full costs for vaccines procured.

Since the closure of the Yaba laboratory in 1991, Nigeria has relied 100 per cent on imported vaccines and donations while the Yaba facility rots away.

While that has happened, episodes of deadly disease outbreaks have met the country always ill-prepared, with thousands killed by Lassa fever, Meningitis, Yellow Fever, and Ebola over the years.

In 2017 alone, Meningitis killed over a thousand people in different states across the country. Also, a shortage of anti-snake venom for three weeks led at least 250 preventable deaths.

There is yet no evidence the government is keeping its plan to restart local production of vaccines.

Information provided on May and Baker’s website says Biovaccine, meant to be the public-private vehicle for the project, was incorporated in 2005 by the company and government as a vaccine production and distribution company.

According to May and Baker, the company is currently located at two facilities in Yaba, Lagos as follows: 445 Herbert Macaulay way Yaba and no 1, University Road, Yaba, Lagos.

PREMIUM TIMES’ visit to the other facility located at 445 Herbert Macaulay way Yaba, showed that the place was largely deserted with only a few staff available.

One staff said the facility was still “being developed” and “about to take off.”

Mr. Okafor while talking about the agreement with the federal government to the media as at July 6, said the firm was yet to sign off the agreement.

“We are yet to put final touches here and there before we sign off. But it is a joint venture agreement. May and Baker is going to provide management. The company, Biovaccine, will be managed as a private venture. It is not going to be a government business. Government will have no influence in the day-to-day running of the company,” he said.

“May and Baker will provide technology and management. Government will provide the chairman of the board, you know in the private sector, the role of the board is supervisory, to provide direction, they do not run the business.”

The managing director also added that apart from the government asset, Federal vaccine production lab at Yaba, the government was not putting in any money in the project.

“May and Baker is bringing the cash. Of course, a new company, Biovaccines, was constituted to run the company, we are going to source financing, even right from the equity provided by the owners of the business. They will run the company and run it in a manner that will ensure that the business succeed,” he said.

The director of media in the Ministry of Health, Akinola Boade, told PREMIUM TIMES that the ministry had already said that the production of vaccine is expected to begin “between 2017 and 2021”.

Fuel Scarcity: Tuface calls for protest, but Nigerians shut him down

Reasons we should not give up in life, By Bisi Daniels