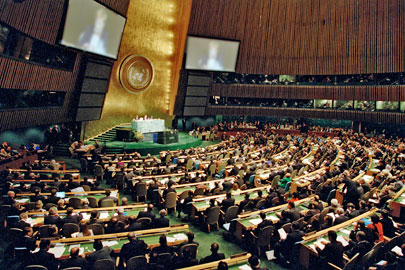 Nigeria on Thursday joined 127 other countries to back a UN resolution which effectively called on the U.S. to withdraw its recognition of Jerusalem as the capital of Israel.

A total of 128 countries approved the non-binding resolution. Nine countries voted against it, 21 did not turn up to vote, while 35 abstained.

Apart from the U.S., all the other four permanent Security Council members voted in support of the resolution on Thursday.

The vote comes a day after President Donald Trump threatened that the U.S. could withdraw funding from countries that back the resolution.

“Let them vote against us. We’ll save a lot. We don’t care,” Mr. Trump said on Wednesday.

That threat did not, however, deter countries like Nigeria, Egypt and several others who despite receiving millions of dollars of American aid every year, chose to stand by majority of the world in condemning the U.S. decision.

The solution adopted by the UN General Assembly states that any decisions regarding the status of Jerusalem are “null and void” and must be cancelled.

Thursday’s vote by the General Assembly comes days after the UN Security Council adopted a similar resolution. That resolution was, however, vetoed by the U.S.

Thursday’s resolution is non-binding and therefore largely symbolic, but the voting pattern indicates the extent to which the Trump administration’s decision to defy a 50-year international consensus on Jerusalem’s status has unsettled world politics and contributed to America’s diplomatic isolation.

A spokesman for Palestinian President, Mahmoud Abbas, welcomed the result, calling it a “a victory for Palestine.”

After the vote, the German Foreign Office tweeted its reasoning, writing that “the status of Jerusalem should be negotiated between Israelis and Palestinians. It should not be prejudged.”

Israel denounced Thursday’s vote, likening it to a 1975 resolution equating Zionism with racism.

“It’s shameful that this meeting is even taking place,” Israel’s envoy to the United Nations, Danny Danon, told the body.

Israeli Prime Minister Banjamin Netanyahu thanked Mr. Trump for his stance on Jerusalem and condemned the vote. Earlier, he slammed the UN as a “house of lies.”