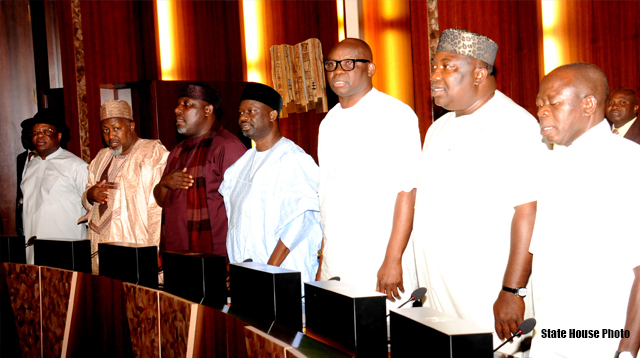 Some State Governors at a meeting at the State House.

The 36 states of the federation spent N2.67 billion to service external debt in September.

The amount is contained in a report obtained on Wednesday by the News Agency of Nigeria (NAN) from the office of the Accountant-General of the Federation.

Figures from the Debt Management Office (DMO) also showed that as at June 30, 2017, the 36 state governments and the Federal Capital Territory had a debt stock of about $3.94 billion (N1.2 trillion).

According to DMO, the states and the FCT are currently servicing loans with multilateral agencies like the World Bank and Agence Française de Dévelopement, AFD.

The breakdown of the figures is as follows:

The data also shows that the 10 states that paid the least on external debt servicing for September are: Taraba, Borno, Plateau, Benue, Delta, Kogi, Jigawa, Nassarawa, Gombe and Niger States.