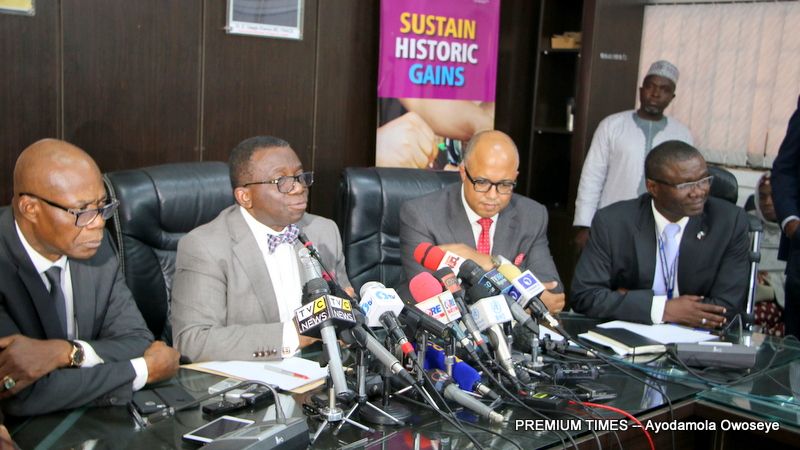 The federal government says three suspected samples of the deadly Monkeypox virus sent to Senegal for testing, have been confirmed.

The Minister Minister of Health, Isaac Adewole, made this announcement at a press briefing in Abuja on Monday.

The federal government sent the samples for analysis at the World Health Organisation’s laboratory in Dakar, Senegal.

The minister said 21 samples were sent to Dakar for confirmation, with four coming from Lagos. Samples from Lagos turned out negative.

Of the 17 samples from Bayelsa, three were positive, 12 negative and two results still outstanding.

Mr. Adewole said with three suspected Monkeypox outbreak in Yenagoa confirmed with laboratory evidence, the most likely source of infection is a primary zoonotic transmission, from an animal, with secondary person-to-person transmission.

“We expect that many of these cases being reported from other states in Nigeria are not caused by the Monkey pox virus, but we will continue to investigate all those cases that fit the case definition,” he said.

Bayelsa state reported the first suspected cases of Monkeypox, before the suspected outbreak were reported across the eight other states.

The minister urged Nigerians not to panic saying the strain of the virus detected is not deadly and that people should maintain good hygiene as there is no treatment or vaccine for the disease.

There are two types of the disease: Central African and West African strains.

Mr. Adewole also warned the media to stop hyping the disease, advising that the educate the people instead..

“People with the viral disease should not be stigmatized. It is not a deadly strain, it is mild. Though some of the samples are negative, but they gave reactions similar to monkeypox, so we are still using technology to determine what is wrong. he said.

The Executive Director, Nigeria Centre for Disease Control, NCDC, Chikwe Ihekweazu, in his remark,urged Nigerians to remain calm as the centre had established an Emergency Operation Centre which will continue to co-ordinate the response across states and test samples from other cases.

He assured that NCDC will also continue to support all states in their response and will keep the public informed as the situation evolves.

“Monkey pox is largely a self-limiting disease, from which all suspected patients that have been reported to date are doing well clinically. Even before this confirmation, all the necessary public health measures have been put in place and will continue to be implemented”, he added.

Measures that can be taken to prevent infection with Monkey pox virus include avoiding contact with squirrels, rats and similar animals, especially when these animals are sick or found dead in areas where the Monkeypox virus is circulating.

The public was advised to always wash hands with soap and water after contact with animals or when caring for sick relatives.

The Monkey pox begins with fever, headache, muscle aches, and exhaustion. Monkey pox causes lymph nodes to swell and the incubation period (time from infection to symptoms) for monkey pox is usually 7-14 days but can range from 5-21 days.

Within 1-3 days (sometimes longer) after the appearance of fever, the patient develops a rash, often begin on the face then spread to other parts of the body.