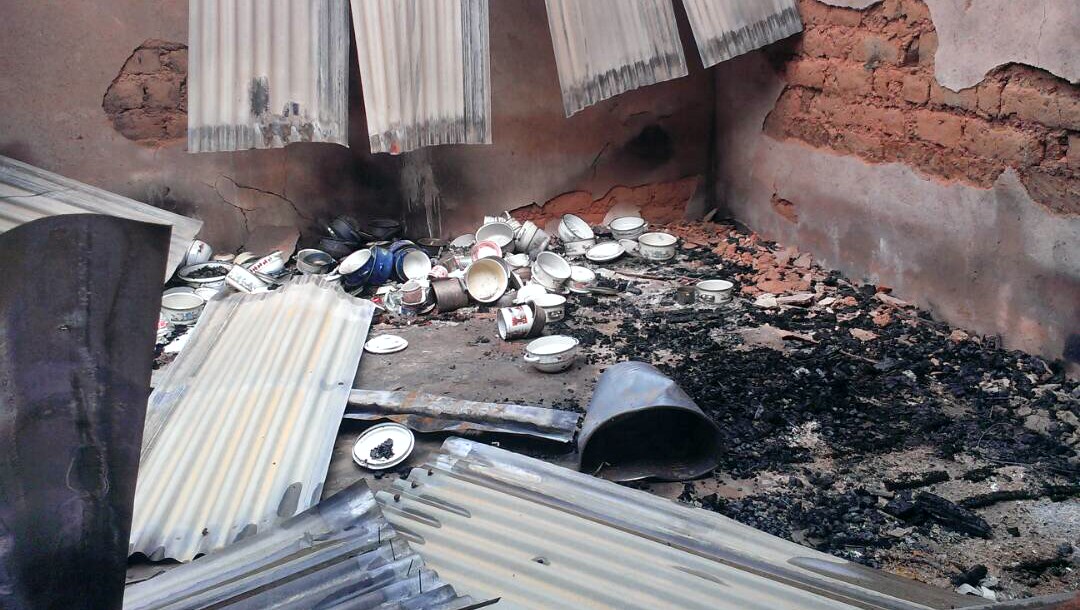 A building razed down in the Mambilla-Plateau attack

For the years he lived with his parents and siblings, Ibrahim Kwarakwara, like other residents of Mambilla plateau of Taraba State, witnessed bouts of ethno-religious violence. Now and again, armed attackers belonging to either the indigenous Mambilla ethnic group or settlers Fulani group, pounced on each other, destroying lives and properties.

The Kwarakwara family survived those attacks until Saturday, June 17. That night, men armed with machets stormed their home in Kwarakwara town in Sardauna Local Government Area of the state with deadly violence.

Eighteen-year-old Ibrahim said he watched from a kolanut tree where he took cover as his father, mother, stepmother and eight of his sisters, were slaughtered.

“It was the worst day of my life,” Ibrahim told PREMIUM TIMES.

In all, police said only seven people were killed, figures the Miyetti Allah Cattle Breeders Association, a Fulani group, disputed. The group said about 351 persons were killed, including 11 members of the Nguroje’s family. About 381 people went missing, it also claimed, while over 20,000 cows were killed or stolen and 483 houses or settlements razed.

But the Taraba State Government said the figures were “grossly exaggerated”. PREMIUM TIMES could not independently confirm any of the figures.

By some accounts, the violence was in retaliation for an earlier attack on the Mambilla group by their Fulani neighbours. Reports of the alleged attack had spread for days and tension mounted with some local government officials urging natives to fight back.

In an article on Daily Trust, the Taraba State governor’s spokesperson, Emmanuel Bello, said the crisis happened after a “Fulani gunman” fired at the chairman of the local government, John Yep’s car in an unsuccessful assassination attempt.

But other residents said the immediate trigger for the crisis was when security operatives, early June 16, arrested some persons in Nguroje town, accusing them of causing unrest in the area and belonging to a Mambilla militia group.

In response, Mr. Yep allegedly led some youth of the Mambilla ethnic group to Nguroje to protest the arrest which they said was instigated by their Fulani neighbours.

Mr. Yep did not respond to PREMIUM TIMES request for comments. He is currently on suspension, and was not in Gembu town when PREMIUM TIMES visited. His phone lines were also reachable.

Umar Abdulmumin, a youth leader in the area, said the June 7 attacks went on unabated for four days, with little or no help coming from the local and state authorities. The attacks only ended when the federal government deployed soldiers and anti-riot policemen to the area.

“Never seen this level of carnage”

During a visit to the area, the Acting General Officer Commanding, GOC, Third Armoured Division of the Nigerian Army, Jos, Benjamin Ahanotu, said he had never seen a carnage like he saw on the Mambilla plateau.

“Even Boko Haram did not slaughter women and children. But here, I saw young children and pregnant women slaughtered,” said Mr. Ahanotu, a brigadier-general, as he inspected the scene.

He blamed the Mambilla plateau traditional rulers and community leaders for failing to stem the fighting.

“Throughout the crisis, Mambilla village heads and community leaders did not come to the aid of the victims as they just watched them die helplessly right in front of their houses,” Mr. Ahanotu was quoted as saying.

“As elders, they did not also make any effort to convey the injured to hospitals, making the victims to lose confidence in the system and to seek medical attention in neighboring Cameroon Republic.”

He blamed politicians for the crisis.

Each round of violence spiralled in to the next with successive governments failing to punish those responsible for the previous killings.

Thousands of peopled were displaced by the 2002 crisis, with many slipping across the border, 100 kilometres away, into neighbouring Cameroon.

Mambilla is the site of a $5.9 billion federal hydro power project, aimed at generating 3,050 megawatts of electricity. As a result, some politicians told PREMIUM TIMES the crisis was an attempt by the opposition to scuttle the project.

Mr. Njiwa said the Fulani took over most of the land through the “grazing permits they were given to help the then authorities identify grazers for the purposes of tax collection”.

He said over the years, the cattle owners turned the grazing permits into certificates of occupancy, thus acquiring vast lands without permits.

Most Mambilla officials refused to comment on the violence.

The Speaker of the Taraba State House of Assembly, Abel Diah, also declined to speak on the matter. Speaking through his spokesperson, Baba Dahiru, Mr. Diah said a judicial panel of enquiry was in place and as such, he would not say anything that may influence its findings.

The killings resulted displaced about 12, 421 people sheltered in 12 IDP camps.

Ibrahim Nguroje was registered at the Nguroje camp. Due to the cold weather, most of the IDPs, especially in Nguroje, moved to various houses for shelter.

The Nigerian presidency had shortly after the crisis, ordered the National Emergency Management Agency, NEMA, to assess the situation and deliver relief materials to the victims as soon as possible.

About 12 trailer loads of relief materials had since been delivered to Gembu, the headquarters of Sardauna Local Government for distribution.

A few days after the bloodletting was halted, Governor Darius Ishaku set up a judicial panel on the Mambilla crisis to find a lasting solution and to avert its recurrence.

The panel is headed by a serving Taraba state high court judge, Nuhu Adi, and has six other members, including representatives of the police, civil defence and the State Security Services, SSS.