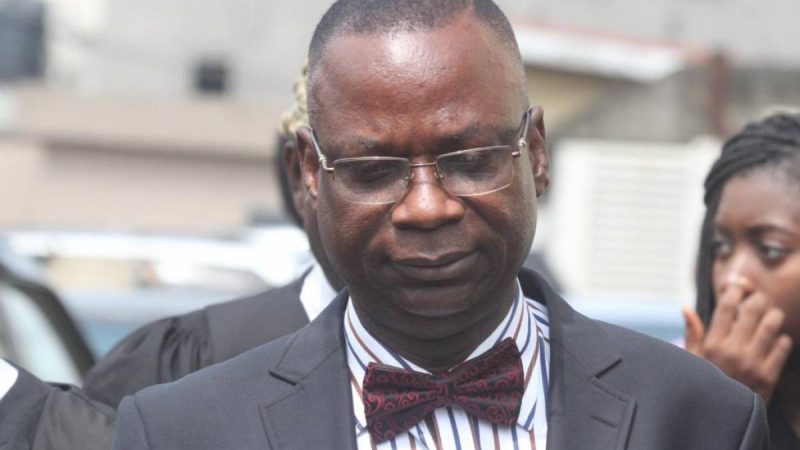 A staff of First Bank, Solomon Akhanolu, testifying at the ongoing corruption trial of Justice James Agbadu-Fishim revealed on Friday that some Senior Advocates of Nigeria (SANs) made deposits of various sums into Mr. Agbadu-Fishim’s bank accounts.

The trial is taking place at an Ikeja High Court in Lagos.

The News Agency of Nigeria reports that Mr. Agbadu-Fishim of the Lagos Division of the National Industrial Court is facing 19-counts of unlawful enrichment by the Economic and Financial Crimes Commission, EFCC.

Mr. Agbadu-Fishim is also alleged to have received funds from a Lagos-based lawyer, Enobong Etteh and Alliance Law Firm.

While being led in evidence by Wahab Shittu, the lead prosecuting counsel for the EFCC, Mr. Akhanolu said: “I am employed by First Bank of Nigeria as a forensic officer and by Nov. 3, 2017, I would be in the bank’s employment for eight years.

“My primary duty is to act as an intermediary between the bank and law enforcement agencies. On Oct. 13, 2016, I received a letter from the EFCC requesting for some bank account documents of James Agbadu-Fishim.

Flipping through bank documents, the forensic officer gave a detailed account of how various sums were deposited by some members of the bar into Agbadu-Fishim’s accounts.

Mr. Akhanolu in his testimony gave further details of various deposits made by lawyers into 2006900216, a second First Bank account, which is also in the name of the judge.

While being cross-examined by Kanu Agabi, the lead defence counsel for Mr. Agbadu-Fishim, Mr. Akhanolu affirmed the authenticity of the bank documents.

“I can vouch for the authenticity of these documents because they were generated by the systems of First Bank and the information was gotten from the inflow and outflow of transactions by customers.

“The bank did not have any problem with these accounts and entries up until the EFCC required them and the bank never reported these transactions to the EFCC.

After Mr. Akhanolu’s testimony, Mr. Shittu told the court that the EFCC had 20 prosecuting witnesses, who were to testify against the judge in the case.

“We will be requesting for a short adjournment because we will be calling 20 witnesses to testify as shown in the proof of evidence and we are interested in fast-tracking the proceedings,” Mr. Shittu said.

Justice Raliatu Adebiyi adjourned the case until November 23, November 24 and December 1, 13, 14 and 15 for continuation of trial.

France, Qatar to contest in final round of election for UNESCO top position