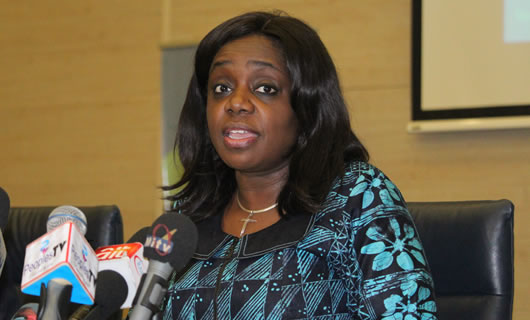 Nigeria’s Minister of Finance, Kemi Adeosun, on September 13 addressed journalists on some of the decisions reached at the Federal Executive Council, FEC, meeting.

Mrs. Adeosun spoke on the Joint Admissions and Matriculation Board, JAMB, saying the past heads of the agency will be investigated over poor remittances.

She said the highest annual remittance by JAMB before its new Registrar, Ishaq Oloyede, assumed office was N3 million.

“The highest amount that JAMB had ever remitted was N3 million. This year, so far, they have brought N5 billion and the Minister of Education reported that they have additional N3 billion that they want to remit, which will take the figure in this year alone to N8 billion,” Mrs. Adeosun said.

The decision by the FEC, presided by President Muhammadu Buhari followed the July 17 announcement by JAMB under Mr. Oloyede that it had remitted N5 billion to the federal government.

That remittance was the highest ever by the agency, Fabian Benjamin, its spokesperson said without providing the remittances made in previous years by the body which accepts fees and conducts examinations for applicants seeking admission into Nigeria’s tertiary institutions.

But how accurate is that statement?

PREMIUM TIMES contacted Mrs. Adeosun’s spokesperson, Salisu Dambatta, who insisted his principal’s statement was accurate and that the ministry had records to prove it.

To authenticate the finance minister’s claim and confirm how much JAMB remitted to the federal government since its inception over 40 years ago, the PREMIUM TIMES Centre for Investigative Journalism, PTCIJ, made two separate Freedom Of Information, FOI, requests: one to the Finance Ministry and the other to the Office of the Accountant General of the Federation.

Despite Mr. Dambatta’s claim, the finance ministry in its reply to the FOI request said it had no details of the remittances by the examination body.

“This ministry is not in possession of the requested information,” C. Gabriel, the Director (Legal Services) wrote on behalf of the finance minister.

In his response, the accountant general provided details of JAMB’s remittances in the past seven years, since 2010.

Based on official records by the accountant general, JAMB remitted more than N3 million in at least three years, 2011, 2013 and 2013.

Based on the government’s own official records from the accountant general’s office, Mrs. Adeosun’s claim that JAMB never remitted more than N3 million annually is incorrect.

However, the records also show that her statement and that of the JAMB spokesperson that the N5 billion remitted in 2017 is the highest ever is largely true, at least going by the remittances made in the past seven years.

Therefore, the government’s decision to investigate the past leadership of the examination body is apt.