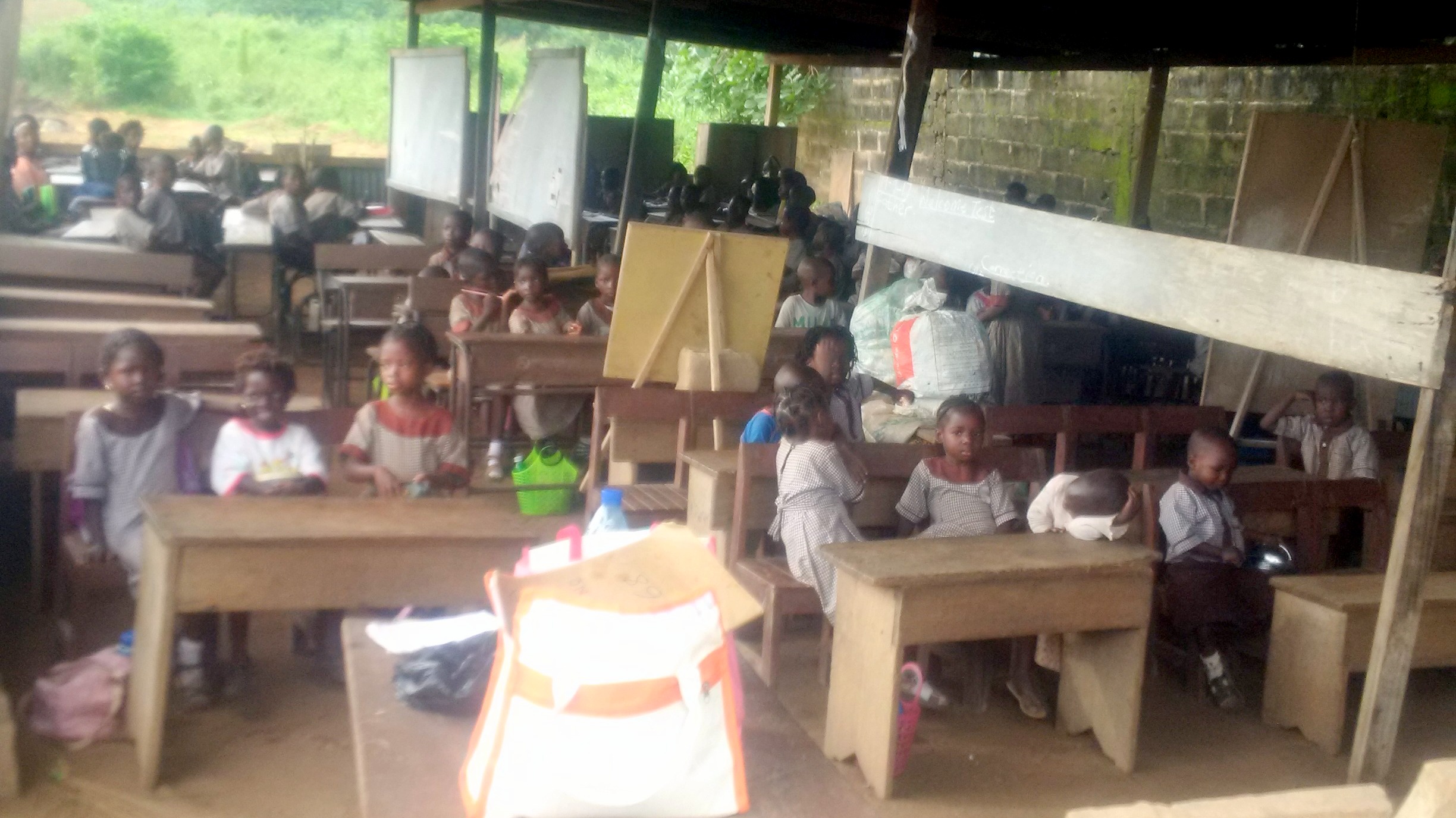 St John’s Anglican School is located in Adekanbi-Agbena community of Obafemi-Owode local government of Ogun State. The community has over 200 houses, with a population of over 8,000 residents.

The primary school is owned by the Ogun State Government. It commenced operations some years back in a community known as Adekanbi, located within the premises of Moshood Abiola Polytechnic, Abeokuta.

However, following a re-acquisition of land, which resulted in the fencing of the land belonging to the polytechnic, the authorities ejected the school from its premises.

The neighbouring, community, Agbena saw an advantage and decided to accommodate the school to continue with its academic activities. This offered other communities the opportunity of registering their children and wards.

The Community Development Association, CDA, of Agbena provided a land for the school to continue operations and also built, through community contributions, classrooms that were tagged ‘poultry made’ classes because they are built like poultry sheds.

The community then forwarded letters to the state government to rise up to the challenge of providing a befitting infrastructure.

But two years after, the government has refused to come to the aid of the school as pupils learn under poor conditions.

Ironically, the state government posted teachers to the school, which presently has over 150 pupils.

A recent visit to the school by PREMIUM TIMES revealed the appalling state of infrastructure in which the teachers and pupils operate.

Inside the cubicles serving as classrooms, pupils are packed so closely that learning is difficult. Teachers also teach the wards under inhuman conditions not fit for a modern teaching clime. Most of the time, learning takes place under the direct rays of the sun.

The school also shares a fence with an abandoned building, said to be housing reptiles.

The vice-chairman of the CDA, Abiodun Adegoroye, lamented government’s neglect of the school and called for assistance to help the kids.

He said since the school was ejected by the Moshood Abiola Polytechnic, no alternative was made.

Mr. Adegoroye said even though the community had done its best to provide infrastructure to aid learning and teaching, these were not adequate or appropriate. He said letter calling the attention of the government to the plight of the community had not been responded to by the appropriate authority.

Similarly, ‎Oluseye Araba, a former treasurer of the community also corroborated the statement of the vice-chairman when he said the school was in dire straits.

”The school was ejected from the polytechnic compound after the management decided to fence the school round. The head teacher of the school thereafter approached our community, and we gladly offered land where we constructed the classrooms with planks as a temporary measure,” he recalls.

The community leader said, after this, the community approached the government to permanently address the problem but it had not responded positively.

He, however, said that officials of State Universal Basic Education came, once, to the school to assess the situation of facilities there but never came back.

‘The authority promised to build a befitting school since two years ago but that is not forthcoming. We are still appealing to the government. Our community has spent over N200,000 to provide the temporary classrooms, and the government should stop this nonchalance. Sun and rain have become a regular threat to both pupils and teachers,” he said.

When contacted on the issue, Public Relations Officer of Moshood Abiola Polytechnic, Sulaiman Adebiyi defended the ejection of the school.

He explained that there had been an illegal incursion by the school on the 900 hectares of the land belonging to the polytechnic hence the decision by the council to fence the land around.

Mr. Adebiyi added further that the polytechnic management informed the government‎ about the incursion and also requested the Ministry of Urban and Physical Planning to address the issue after which the school was ejected.

Meanwhile, the Commissioner of Education, Science and Technology, Modupe Mujota, when approached for comments referred our correspondent to the chairman of the State Universal Basic Education Board.

The Chairman of the board, Olatunde Okewole, when contacted also confirmed that the school was indeed ejected.

He agreed that the present location of the school was not conducive adding that ”the government would look into the matter.”

He said the board would in the next few weeks commence ”the needful to make the school a better place of learning.”

The chairman pointed out that the construction of three blocks of classrooms would be the first step to be taken by the government.

”I have been to the school. It is not the best place to have pupils. I can assure you that State Universal Basic Education has plans to erect a block of 3 classrooms within the next few weeks,” the official said.

Drama as teenager ‘loses manhood’ after shaking hands with stranger