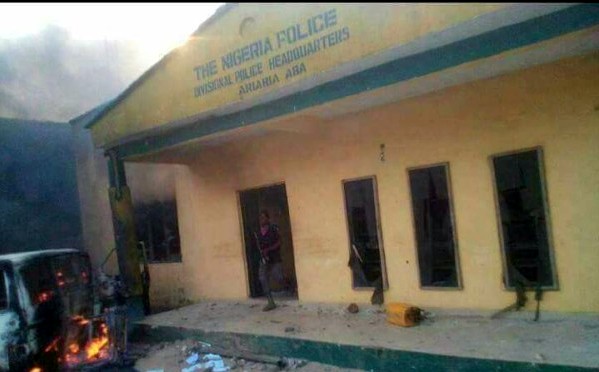 Suspected members of the Indigenous People of Biafra (IPOB) on Thursday morning burnt a police station in Abia State and injured one officer, the police spokesperson for the state has told PREMIUM TIMES.

According to the spokesperson, Geoffrey Ogbona, the attack was carried out around 6:30 a.m.

“Ariaria police station (Aba) was burnt down this morning,” Mr. Ogbona said. “The people that did this we are suspecting they are IPOB hoodlums.”

“The people came in their number, besieged the station and one of our police men was beaten up,” the spokesperson said, adding that “but glory be to God, we did not lose the officer’s life.”

Mr. Ogbona said while the violence was underway, the police restrained itself, failing to respond in kind.

“If anything like that had taken place, it would have worsened the situation,” Mr. Ogbona told this newspaper.

He, however, denied the report by Television Continental (TVC) that the Umuahia residence of the commissioner of Police for Abia State was attacked by IPOB on Thursday.

“That of (attack on) the residence of the Commissioner is not true,” he said. “What happened there was that the place is close to the residence of the IPOB leader, Nnamdi Kanu; so, when people see IPOB members gather around there they may think something like that (attack) was happening.”

He also confirmed attacks in which the Hausa community in Aba, the commercial nerve centre of the state, was targeted, but said normalcy had been restored, following police intervention.

He said, “When we got wind of this, my commissioner moved to Aba and the issue was addressed. All the Hausa people were assured of their safety and they returned to their businesses.”

However, PREMIUM TIMES learnt that about 2,000 Hausas, including women and children, are currently held up in a relatively safe place in Aba, afraid for their lives.

The deteriorating situation in Abia, the home state of secessionist leader, Nnamdi Kanu, on Thursday, followed a report that the police lost a sergeant in a clash with secessionists in Rivers State on Wednesday.

“Anybody indulging in violence is not an IPOB member,” Mr. Ejiofor said.

There has been tension in Abia since the Army commenced its Operation Python Dance 2 on Sunday.

The violence there has continued despite the dusk-to-dawn curfew imposed on Aba by the state government.