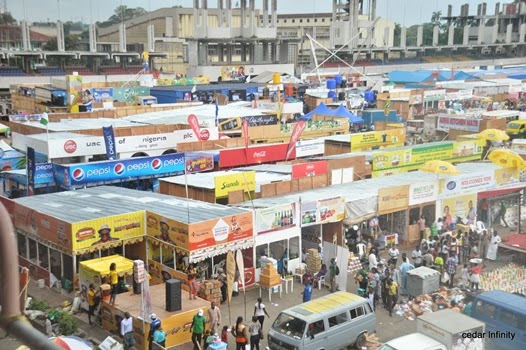 Reactions have continued to trail the revocation of concession rights earlier given by the federal government to Aulic Group for the management of the Lagos Trade Fair Complex.

PREMIUM TIMES paid a visit to the popular market located around Lagos/Badagry expressway, situated on a large expanse of land in the area. It is meant to be a massive commercial hub in the country and also geared towards raking in revenue.

Aulic was granted the concession rights in 2008 after an intense bidding process. The right has since been revoked since September 4, 2017, at a National Council on Privatisation, NCP meeting chaired by Vice President, Yemi Osinbajo.

In 2015, the Bureau of Public Enterprises reportedly made a move to start the revocation process over allegations that Aulic was not paying its prescribed yearly fees; although the recommendation of the BPE was not implemented then.

Since the official revocation, there have been diverse reactions from Nigerians with many praising the move to take the rights away.

At the complex, an official of Aulic group who spoke with PREMIUM TIMES under condition of anonymity because the matter was in court said the firm was not fairly treated.

“We believe so much that the federal government is not aware of some issues happening in the market. After we won the concession rights, we have not been paid one naira as lease rent by the traders. But we believe that the government has the power to do what is right, especially with the knowledge of Vice President Yemi Osinbajo who is a lawyer and understands the law,” the official said.

The official said the firm would wait for the outcome of the court case before taking the next step.

“The matter is in court. We have sunk a lot of money into the complex without getting anything in return and you just come one day to say it would be taken over?”

The official who said it was not the right time for the press to be involved said the firm had invested a lot in the complex but had not realised anything in return.

Meanwhile, some traders who spoke with the reporter welcomed the development.

A trader who identified herself as Blessing, a trader in the centre said Aulic had not “acted in best interests of traders before now.”

“I heard about the takeover early this morning. I must say that really the market has not been in a good state. Look at the buildings, they are beginning to rot and no one is saying anything,” she said.

Another trader, who deals in cosmetics and identified himself as Ojukwu, said he was pleased with the takeover but expressed joy that he would not be directly affected since “his section of the market belongs to Balogun Traders Association and not Aulic.”

‘‘Traders have lost confidence in Aulic. Here belongs to Balogun Traders Association. The road has become so bad. There was even a time that we said we should contribute money to repair the roads but Aulic said ‘no.’ Look at the buildings, people are only managing. They (Aulic) are not doing a good job,” he said.

Also, Uju Alli, another trader said things are not easy in the market as customers are beginning to desert the complex.

PREMIUM TIMES also gathered from some traders reportedly paid between N7000 and N15, 000 monthly as fees, a situation they were unhappy with.

The traders also decried the situation at the market where customers who had already paid for their goods would be compelled to pay fees at the gate again before being allowed to exit.

A customer, who identified herself as Modupe, said she doesn’t come to the market regularly again due to the fees she is compelled to pay at the gate whenever she patronises the market

PREMIUM TIMES learnt that customers pay fees ranging from N100 and above depending on the number of goods bought at the complex.

In 2013, a group known as Association of Progressive Traders faulted the takeover of the complex by Aulic describing it as unfair especially in the light of their investment in the complex.

In the same year, former President Goodluck Jonathan during the 27th Lagos International Trade Fair had hinted that the federal government will take over the complex as a way to resolving the persistent disputes on ownership.

Meanwhile, in the latest move, the federal government has not stated whether it would take over the complex fully, lease it to another private company, or hand it over to the Lagos State government which has asked for it.

It would be recalled that the NCP had not only approved the revocation of the concession of the complex at its last meeting but ordered a fresh privatisation process for the Yola Electricity Distribution Company.

It also approved the privatisation of Afam Power plants 1-5 which is aimed at injecting additional power into the national grid and improving electricity supply.

The council equally approved the pursuit of an out-of-court settlement of the dispute over the privatisation of Aluminium Smelter Company of Nigeria, ALSCON.

Among other decisions, the council also reviewed the proposals presented by its Secretariat, the Bureau of Public Enterprises, BPE for the reform and restructuring of various sectors of the economy.

How SSS foiled IS attack on Abuja, Kano, Kaduna, others – Official