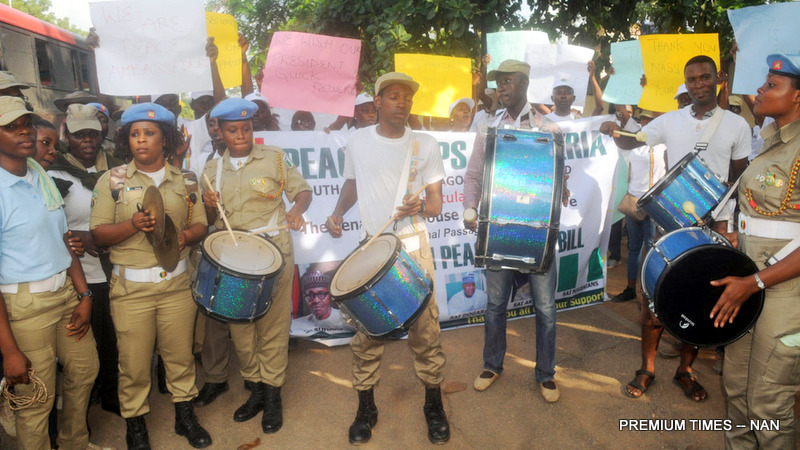 Despite its ongoing problems with the police and other security agencies, the Nigerian Peace Corps on Wednesday deployed its personnel to mosques and Muslim praying grounds and flash points in Nasarawa State ahead of this year’s Eid-el-Kabir, the News Agency of Nigeria has reported.

The police and other security agencies have accused the Peace Corps of being an illegal paramilitary agency and are prosecuting its leader, Dickson Akoh. Mr. Akoh has, however, alleged victimisation, saying his organisation is a duly registered NGO.

The National Assembly has since made moves to legalise the Peace Corps into a para-military agency.

The lawmakers passed the Peace Corps Bill last month, but it is yet unclear if President Muhammadu Buhari will sign it into law.

PREMIUM TIMES had since unearthed how scores of senators took bribes to pass the bill. But the Peace Corps denied the story, saying it only lobbied the lawmakers.

Bala Joshua, commandant of the corps in Nasarawa State, told reporters in Lafia, the state capital, that 90 Peace Corps personnel would train other members that will provide security at several local government areas of the state, as activities heightened ahead the major Muslim celebration on Friday.

The personnel are undergoing a three-day routine training programme to prepare them for the task.

Mr. Joshua, who reportedly described the exercise as a “proactive strategy”, said it was to ensure a hitch-free Sallah celebration.

He said that the corps embarked on this in the interest of national security, stability, peace and development.

“We have decided to train you for effective service delivery so as to ensure peace by assisting other security agencies in combating crime in the state and the country at large,” Mr. Joshua said.

“We are collaborating with other security agencies to sensitise the people on the need for them to behave well, shun crime and other negative tendencies in order to have a hitch-free Sallah celebration,’’ he said.

But the police commissioner in the state, Bello Sadiq, denied working with the Peace Corps ahead of Sallah.

“I’m not aware of any cooperation with the Peace Corps by my command,” Mr. Sadiq told PREMIUM TIMES Wednesday night.

He said the command has coordinated with existing security agencies of which the Peace Corps is not amongst.

Existing security and relevant federal agencies, including the Office of the Head of Civil Service of the Federation, have openly expressed their disapproval of the Peace Corps and the activities of its leaders.

The police have not reopened the Peace Corps headquarters in Abuja several months after they shut it and arrested its national commandant, Mr. Akoh, who had since been released on bail.