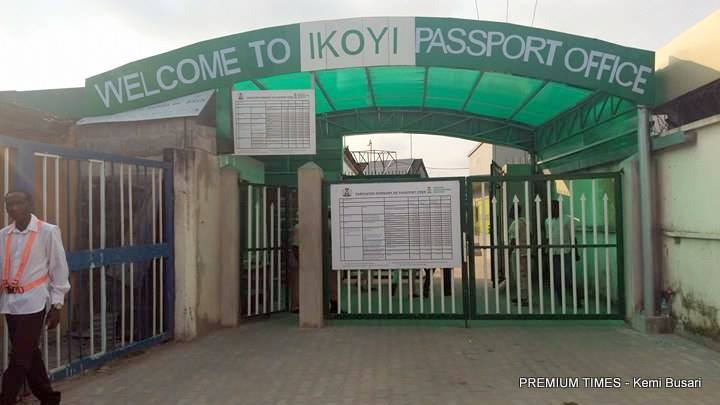 This is the second and final part of the investigation. Read the first part here.

‘Hello sah,’ ‘passport sah,’ ‘I can help you to get it fast sah,’ pleading voices, obviously deceived by my appearance, beckon as I moved closer to the premises of the Ikoyi passport office.

In the next minute, I was with Ade, the one who appeared most suitable for my mission.

After the usual 32, 64 booklet explanation, ‘why one is scarce and the other is in abundance’, Ade offered to take me to his capturing office even before I explained my mission in details.

The process of passport acquisition at the Ikoyi office is divided into parts and each part is handled by immigration personnel or an affiliated tout.

The first part, which is the actual registration, is done under the trees, inside abandoned vehicles, gate corners and a large shopping complex situated beside the passport office.

‘’This is where we do the registration. Let me bring the form for you so that we can talk,’’ Ade said while helping me to a seat in one of the shops in the complex.

The form is almost like the one offered at the Alausa office, except for a few grammatical errors. And after feigning a careful look of it, I explained to Ade how he may ‘help’ me.

“I work in a big firm and in our last meeting, the management mandated us (workers) to get passports. In fact, they have started deducting it from our salaries. I told them I would handle it because I have a brother who does the runs but when I called him, he said the officer that helps him has been transferred. I want you to give me a cheaper price and explain how this money will be distributed so that you and I can do business.’’

Nobody would have doubted me anyway. While I explained to him, I presented an A-4 paper with a flourish on which I had listed 18 names of would-be-applicants; all fake names of course.

Now seeing me as a partner in the business, Ade would in the next 30 minutes take me further into the ring of money-making passport business at Ikoyi office.

‘‘If the official payment is N23, 000, what do you use the remaining money, N12, 000 for?’’ I ask, adding that I needed to know to enable me convince my ‘superiors’ who would want to know why such the sum is being paid.

“The N23, 000 is the official price, government price. I will still have to give your file to someone who will runs it, after they run it, they will still take it to the production room, the capturing room and other stages. These stages will cost me N7, 000.

‘’The officer I will hand your file over to will collect the N7, 000 and pay N5, 000 to a junior officer at the production room who will distribute the money and handle other stages. That is how it works.

“Sometimes, the people at the production or capturing room also request for extra pay which I would have to remove from my own ‘workmanship’ (remaining N5, 000).’’

After this explanation, I informed Ade that I will give him the ‘contract’ of applying for the 18 of us, but on a final condition that I spoke with the officer he works with.

‘’I have a senior officer nah,’’ he smiled, obviously to douse my fear.

“Before I can do anything, I must pass through him. He is a two-star officer and his price doesn’t go below N7, 000. I can make you talk to him since you want to do more than one but that is when you are ready and I have the money with me.’’

With this, it was a done deal between me and Ade as he gave me his mobile number and I quickly save ‘Passport’ as his surname again.

At Ikoyi, your money buys you a guarantor

After this discussion, Ade asked if I had my documents with me, so he could help with my application before others.

“Let me tell you all the documents you need so that you will bring everything next time,’’ he said after I replied in the negative.

“You will need a birth certificate, state of origin (certificate of origin), four passport photographs, and for your guarantor, your money has covered for that. We’ll provide you a guarantor so you don’t need to worry about that. Once you bring all these and pay, you will have your passport.’

“But where will you get a guarantor for me,” I probed.

“Just don’t worry about that,’ Ade replied, now sounding pissed off by my query.

Like Alausa, the Ikoyi passport office has no front desk for a new applicant to make inquiries. The office is always under heavy security with men of the Nigerian Army and combat-ready immigration officers on guard.

The officers are strategically placed such that it would be tedious, almost impossible for even a bird to pass through the main gate without their permission.

I decided my mission would not be complete until I had my way into the main premises and I was determined, so sure that I would be granted entrance. With this mind set, I headed for the main entrance.

I was wrong. No sooner had I stepped into the pathway than I was accosted by an immigration officer who demanded to know why I was there.

With what many would call a ‘tush’ accent and demeanour, I explained to him my intention of facilitating passport application for multiple persons.

I was lucky to have his audience, unlike other officers who usually hand over their ‘customers’ to touts after a short conversation, probably for fear of being caught in the act or to make way for other ‘customers.’

In the next few minutes, the immigration official (name withheld) would explain to me, like others, the basic knowledge required by applicants. He agreed to N30,000 for the 32-page passport and assured of the provision of a guarantor.

“You don’t need that,” he replied after I ask if I needed to first get my guarantor informed. “Just apply now, we’ll have it sorted,’’ he added.

I hesitated and told him I will make some calls for cash and come back shortly. He offered me the use of his phone number and asked me to ring him up whenever I’m ready.

“Save my number with (name) passport,’’ he said.

Written on the home page of the NIS website, immigration.gov.ng, are instructions on how to make fresh applications for a passport.

Applicants are enjoined to follow three simple steps: complete passport application form online; make payment and obtain Application ID and Reference Number; print out Guarantor’s Form to be signed by a guarantor and commissioner of oath in a competent court of jurisdiction; and then submit completed passport application form with other requirements in person at passport office selected during online payment process for further processing.

Simple, you’d call it. But it doesn’t turn out to be so.

Even though the prices of passports are quoted on the website of NIS, as N17, 000 for 32-page booklets and N22, 000 for 64-page booklets, officers charge different prices in different states.

Further investigations into prices in other states show more disparities in the price regime of NIS.

Reacting to differences in fee and others allegations, the Public Relations Officer of NIS, James Sunday, said all the passport offices in the country operate “the same system.”

“As far as I know, all the passport offices throughout the Federation have the same rates and if anybody is doing something else, contrary to what we do at the headquarters, I cannot defend that,” he said.

“We don’t have discrepancies in passport fees. The Comptroller-General (CG) is magnanimous enough to have uploaded the fee on the service website and that is the correct fee. Since the introduction of e-passport, the prices have not been altered.

“The CG has vowed that no Nigerian should suffer in the hands of immigration officers and he won’t take it lightly with the officers who charged you (the reporter) high fee.

“The passport is the property of the Federal Republic of Nigeria so Nigerians are entitled to getting the best.’’

He further debunked claims that the 32-pages booklets were scarce at passport offices saying “It’s not true.”

According to him, the offices had adequate supplies of the 32-page booklet and “at no time should officers dictate for applicants which to choose.”

On specific allegations that the PCO of FESTAC office Lagos demanded extra money from online applicants to ‘run the office,’ Mr. Sunday was quick to defend the service.

He said, “That is the opinion of the officer. There is no office that is directed to request for money to run its services. The service headquarters send funds to maintain offices throughout the country.’’

On the Comptroller-General’s promise that official fees/categories of passports will henceforth be displayed at various passport offices to ensure transparency, he explained that the process “is in the pipeline.”

“It’s an executive order given to the service and there is a committee already set up to that effect, we call it SERVICOM. They are currently working on that,’’ Mr. Sunday said just as he assured Nigerians that once the committee swung to work, “the prices will be displayed.”

After the first part of this investigation was published, the Immigration Service made steps to correct some anomalies that allowed the passport scandal to continue, while promising official investigations to weed out corrupt elements within its ranks.

At the Alausa Passport Office, the Passport Control Officer, Abdullahi Dalhatu, has ordered the immediate closure of shops operated by touts within the premises.

When PREMIUM TIMES visited, the shops which initially housed touts who receive payments from applicants on behalf of NIS were under lock. The price board which displays different amounts for obtaining passports was also displayed at the entrance.

Similarly, authorities at the Ikoyi office have taken steps at checking corruption among immigration officers.

When a PREMIUM TIMES correspondent as conducted round the premises, new changes such as the display of permanent price board at the entrance, enhanced security and monitoring of officers’ activities through surveillance cameras had been put in place.

Also, the activities of touts around the premises had waned compared to when this reporter conducted the investigation.

Man attempts suicide over inability to pay back N50,000